Somerville, Mass., Is Ground Zero for the Garage of the Future

And one car company is leading the charge. 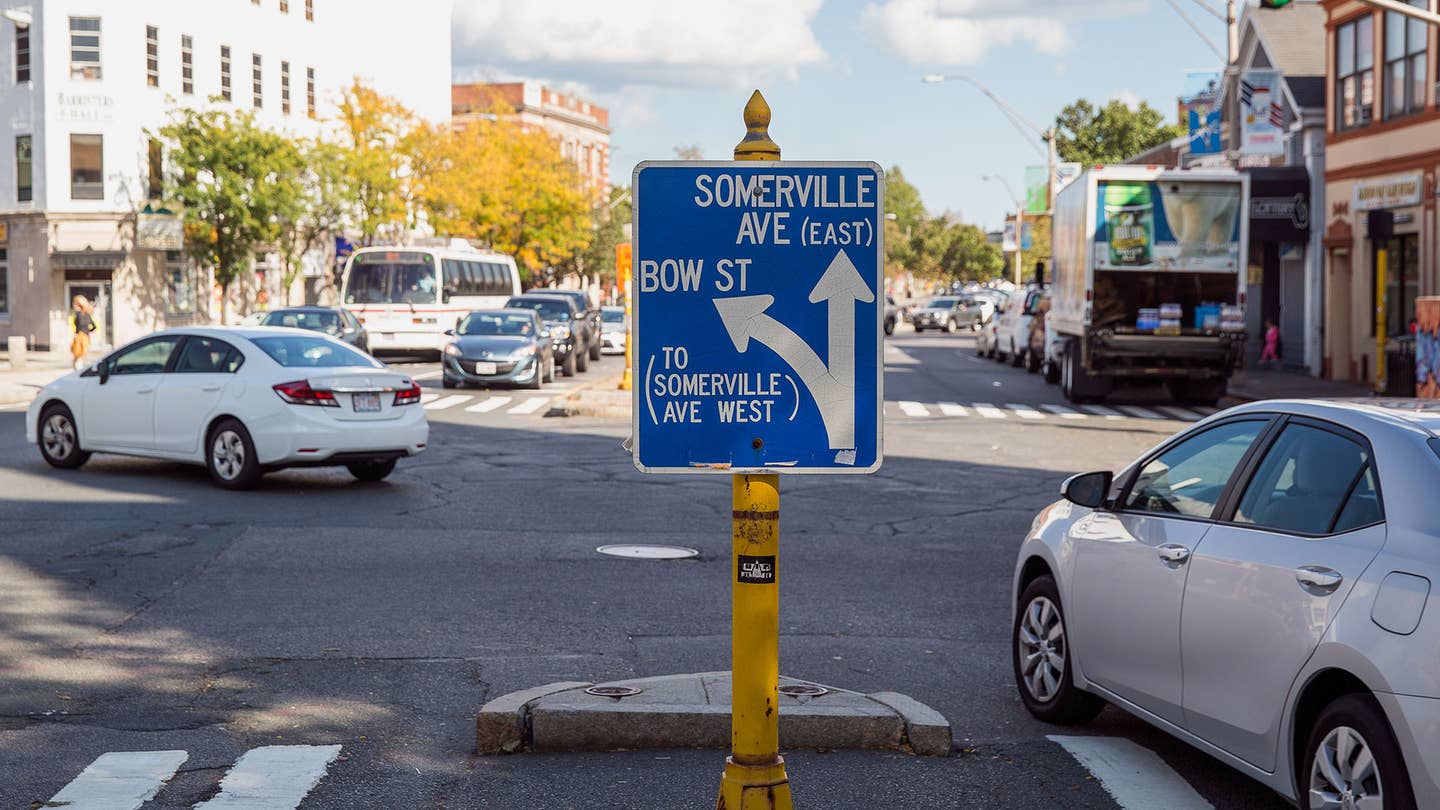 Once you’re done being chauffeured by a self-driving car, even a 560-horsepower Audi, you’re going to need a place to park.

Audi’s vision of that autonomous future has Somerville, Mass.—a fast-gentrifying outpost of Boston, just west of Cambridge—becoming one of the world’s first cities where cars can disgorge passengers and then park themselves in an automated lot. Audi says its piloted park technology is market-ready, and just needs a home: structures where cars can bunch in military-tight formations, leaving just four inches of space between their mirrors. Planned for a 2018 rollout, the human-free garage—no staircases or elevators required—could ultimately pack in 62 percent more cars than a conventional garage of the same footprint.

But it’s not just about saving 22 square feet per car, or putting sketchy Ferris Bueller parking attendants out of work. At full capability, Audi says, piloted parking could save a half hour on the morning commute, ease gridlock, cut emissions by 15 percent, free up vast tracts of prime real estate, transform architecture and boost productivity and quality of life. Not a bad day’s work.

Audi unveiled its latest Urban Future Initiative project at the Smart City Expo in Barcelona. Planners, policymakers, architects and engineers offered prescriptions to avoid a dystopian, Blade Runner-style future. Jean Clos, executive director of UN Habitat, says that by 2050, some 2.5 billion additional people—two of every three on the planet—will live in urban areas. These cities already churn out 70 percent of global warming emissions. Without a true revolution in mobility, Clos and other experts caution, explosive growth will lay waste to the planet and paralyze cities whose infrastructure is woefully unprepared.

The warnings couldn’t be more dire. Yet only six percent of American cities are even considering autonomous cars as they plot their transportation and infrastructure plans, according to a National League of Cities report released last month.

That puts once-sleepy Somerville at the vanguard. Its Assembly Row project seeks to convert a former industrial wasteland on the Mystic River into a bustling commercial, residential and leisure district, but freed from the downsides of automobiles. Set as it is amid New England’s densest metropolitan area, Somerville—in accordance with typical market demand and municipal codes—must set aside up to 40 percent of urban land for parking, at a cost of roughly $25,000 per space. Audi claims that Assembly Row will bring up to 12,000 new cars, and the developer has already carved out 4,100 spaces at a cost of $100 million, with 3,000 slots to go. That model isn’t sustainable, says Chris Weilminster, executive vice president of Federal Realty Investment Trust, the private developer backing the project. Reducing the automotive footprint to around 20 percent is the goal, including eventually moving parking out of downtown areas entirely, to transit hubs served by autonomous cars.

“Space is the scarcest resource in cities,” Weilminster says. “You can do better things for the community than waste money on parking.”

While autonomous cars are often touted for safety benefits, they may be equally valuable to free that space for people, rather than car storage.

“There are 750 million parking spaces in the U.S., so even small savings are huge,” Weilminster says.

With the Audi dropping you off at your destination, parking lots could be moved out of prime areas and out to the fringes. That hyper-expensive real estate could go where it’s really needed, to living, working, shopping or open space, including for pedestrians and cyclists. Developers could see more financial upside to investing in troubled urban areas. Architects could focus on designing parking-free, human-scale buildings, a revolution in itself.

Somerville and Audi also plan a network of camera-controlled smart traffic signals in the busy Union Square district that communicate with cars and a traffic control center to ease congestion. And with today’s cars spending 95 percent of their time parked and idle, Audi envisions a fleet of time-shared Audis, with commuters driving to and from work and the cars freed for other customers the rest of the day or night. Together with piloted parking, that could put a huge dent in gridlock, with experts saying that 30 percent of traffic in major cities is simply people looking for parking.

Clos and other experts say that the entire urban futurist movement tends to be wrongly perceived as a technology play, when it’s really about jobs, happiness, safety and the environment.

Somerville itself—once demeaned as “Slummerville” (or the more geographically faithful “Slummahville”)—now trails only Silicon Valley as the fastest-growing urban area in the U.S. And Philip Parsons, a Somerville resident, urban planner and former dean at Harvard College, says the city can be a test lab that will make automobiles our friend again, rather than an enemy.

“This is sowing the seeds of an idea,” Parsons says. “And the reason it will happen is because it’s such a win-win.”