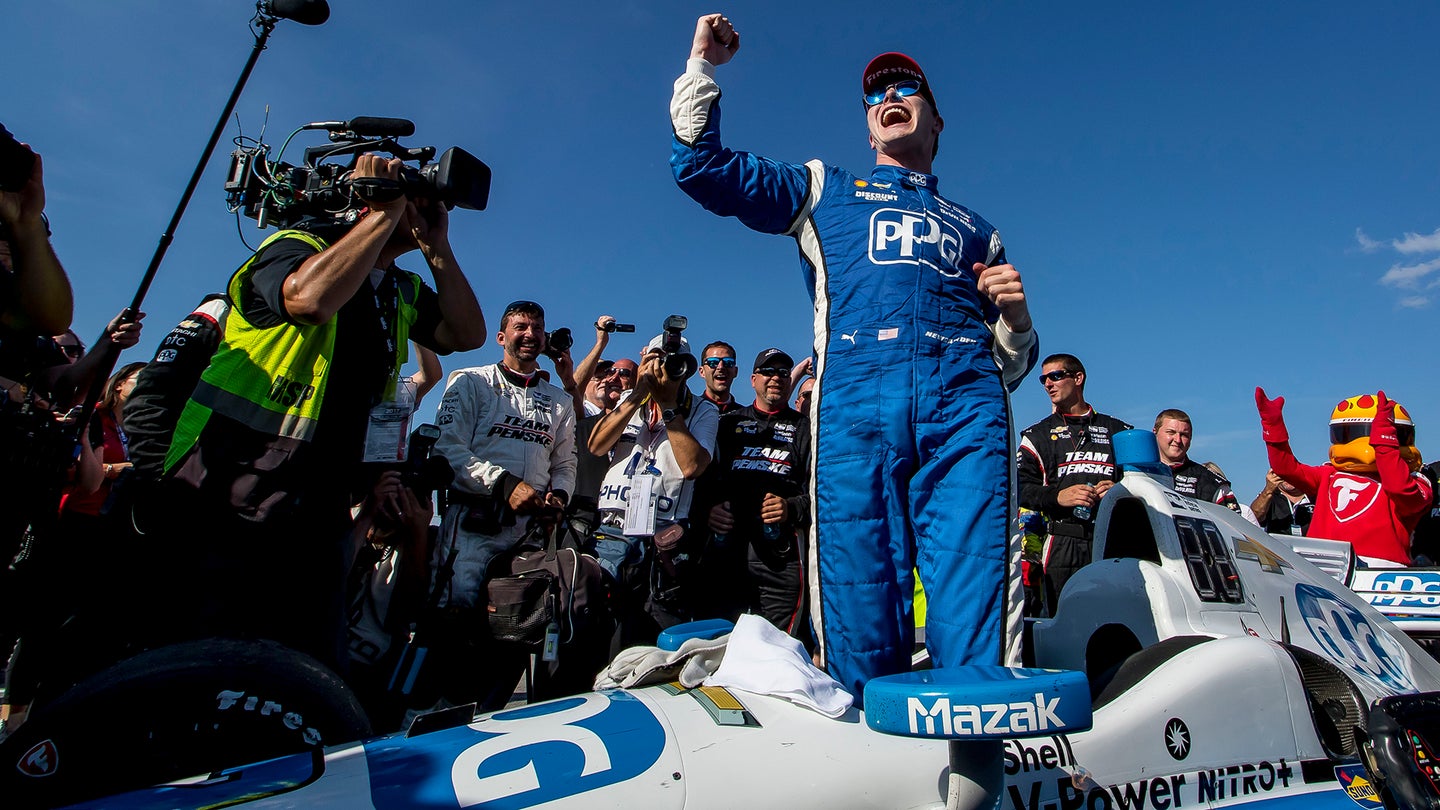 Josef Newgarden is coming on strong late in the 2017 IndyCar season. He delivered a dominating win at Mid-Ohio on Sunday and took the lead in the championship by just seven points. In the 14 races so far this year, there have been nine different race winners. Newgarden is the first driver to win three this year.

Will Power took pole position for the race and kept his first place at the start. For 12 laps, Newgarden, who started second, followed Power around the track. On lap thirteen, Newgarden put a move on Power that he'll be able to brag about for the rest of his life. Approaching turn four, Newgarden went far to the outside and then dive-bombed the turn right before the apex. Power was completely caught out by the move. From then on, Newgarden controlled the race and took the win without breaking too much of a sweat.

Newgarden did get a little help late in the race. The safety car came out as Ed Jones spun off on lap 67. Two laps earlier, Newgarden had pitted and switched to the hard tires. Behind him, Power, Graham Rahal and Simon Pagenaud all pitted for the soft tires. With the safety car bunching up the field and Newgarden's ten-second lead gone, he risked being swamped by those on the stickier rubber.

Help came in the form of an over-ambitious Esteban Gutierrez. He was between Newgarden and Power on track, but a lap down. The order came from Gutierrez's pit box to get around Newgarden to get the lap back. Gutierrez had been off the pace all day. This wasn't going to happen.

As the race restarted, Gutierrez gave Newgarden the buffer he needed to get his harder tires up to temperature and to build up a gap again. To be fair, Gutierrez was completely within his right to try to get his lap back. Newgarden didn't immediately rocket off into the distance. But for the likes of Power, Rahal, and Pagenaud, he was an obstacle. The three of them should have been able to make short work of Gutierrez, but they didn't.

Maybe Gutierrez should have done the gentlemanly thing and gotten out of the way, but he wasn't required to. If he had moved over, Newgarden had the pace and more than enough push-to-pass left to keep the others at bay. They hadn't been able to catch him all day, and they probably wouldn't have in the end.

With the victory, Newgarden sits in the championship lead with 453 points and is seven points in front of Hélio Castroneves, who in turn is only one point ahead of Scott Dixion. The top eight in the championship are separated by just less than 100 points. With a maximum 54 points available for each of the next three races and double points on offer for the season finale, anyone can still win it.

Consistency will the key to the final four races. If almost anyone in the field can put together a string of podium finishes coupled with a little bad luck afflicting others, the championship could be theirs. The top eight are all within striking distance and places nine to fifteen are technically still in it, but would need a lot of help from every deity ever worshiped throughout the whole of human history. However it plays out, the last four races of the 2017 IndyCar season will be thrilling.