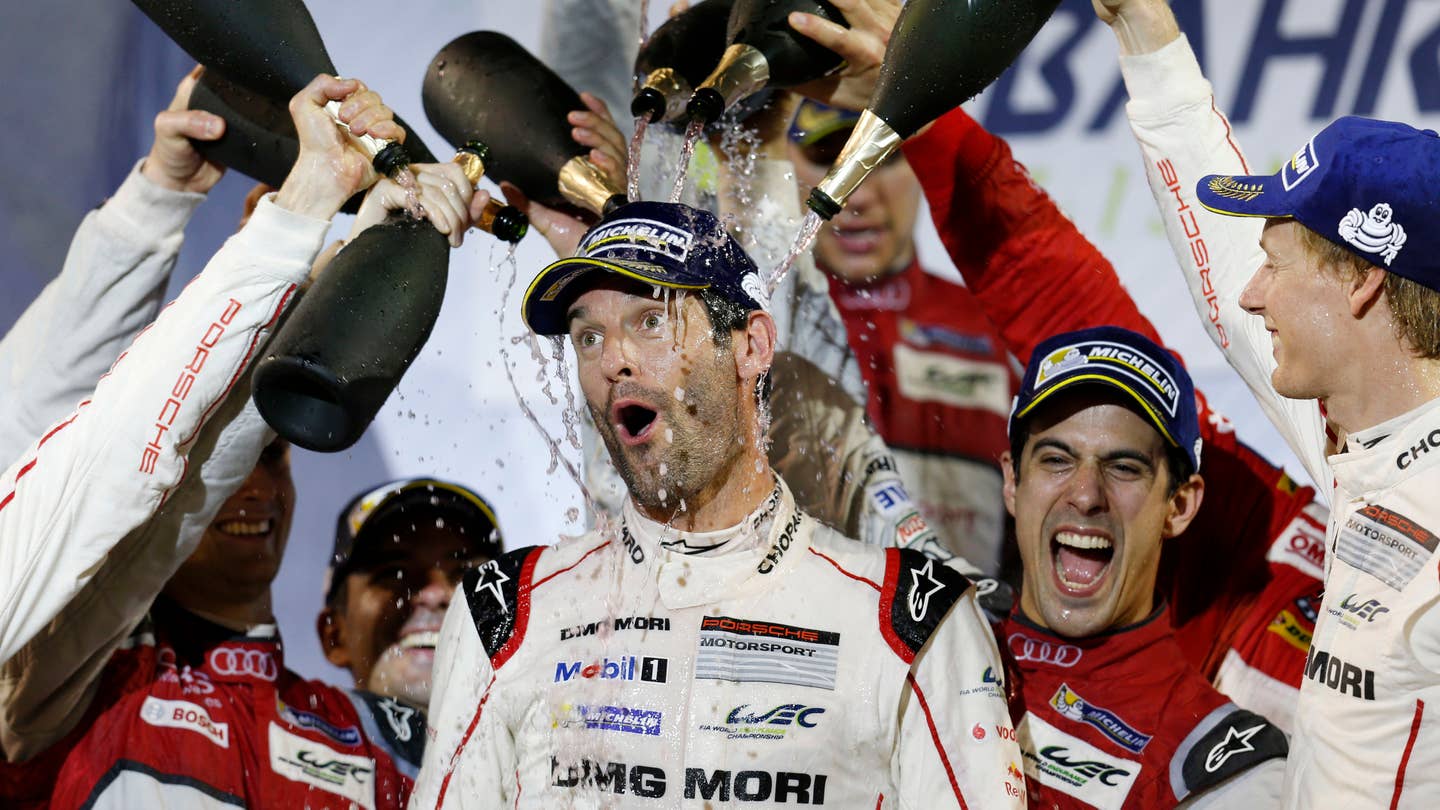 Mark Webber's career has been phenomenal, from years at the front of the F1 grid to years at the front of the WEC grid with Porsche. This weekend marked the final time Webber climbed on board the now-familiar Le Mans-winning 919 Hybrid prototype to race in the 6 hours of Bahrain. While Porsche wasn't quite quick enough to best Audi to win the event outright, they did manage to be quick enough to grand Mark one final podium celebration to close out his illustrious career. I was ecstatic when Mark was announced as one of Porsche's drivers for their return to Le Mans a handful of years ago, and I'm a bit sad to see him leaving the series, but he's leaving on a high note. He's an FIA world champion, as well as a Le Mans winner, and he's helped Porsche win the constructor's championship for 2015 and 2016. While the work isn't completed by just one man, Mark's spirit and speed have certainly been welcome at Porsche for all of that time. He'll still be with the Porsche team, but now as an ambassadorial role rather than a racing role. In any case, I hope he is proud of what he's accomplished with the team, he certainly should be.

The race played out as usual with Porsche near the sharp end of the grid. The #1 car of Webber, Timo Bernhard, and Brendon Hartley started the race from second position on the grid with Bernhard taking the green. Shortly after the start of the race, Porsche teammate Neel Jani moved up into second, and on lap 17 Bernhard is passed also by the #7 Audi, demoting the #1 to fourth overall. On lap 29 Webber jumped into the 919 and set about the work that needed to be done. On lap 43 he caught and passed the #5 Toyota to move into third. At lap 59 he passed off to Brendon to end his first stint of the race. Porsche then passes the reigns to Bernhard, then Hartley, then Bernhard again. At lap 180, Bernhard hands the car back to Mark for the final hour of the race so he can have the honor of taking the car to the flag in his final race. Ultimately the trio finishes in third. It was enough.

Mark Webber, Driver #1 Porsche 919 Hybrid LMP1 - “I was the second and the last driver in the car today, and pretty happy with both stints. Early in the race I had a nice little fight with the number 5 Toyota. I managed to get passed him and tried to pull away, but we didn’t have enough pace to fight the Audi. Then for the final stint it was pretty emotional putting my helmet on for the last time. I enjoyed the last stint and I got the chance to bring the car to the chequered flag for the top three finish, and this was the maximum we could get today. It has been such an incredible three years for me with Porsche, together with Timo and Brendon and the whole team. Nothing is forever, I’m stopping at a good time and I’m looking forward to seeing everybody again soon.”

Fritz Enzinger, Vice President LMP1 - “Today’s race has shown what characterises the Porsche Team. It was able to handle a difficult race under huge pressure. I can only say thank you to all six drivers, every single team member and the Porsche board members, who have supported this programme right from the beginning. Also today at the track they have personally shown that they absolutely support the project. Congratulations to Audi for a well deserved victory today, and thanks for the great competition – we will miss you.”

Andreas Seidl, Team Principal - “Le Mans winners, manufacturers’ and drivers’ champions – for the second consecutive year we have achieved all our goals. That is an immense joy for us as the Porsche Team. I congratulate our three world champions Marc, Neel and Romain as well as the crew of car number 2. This car has been the only one of all LMP1 entries that hasn’t spent a single second inside the box with technical problems during the 2016 races. We are now looking forward to the celebrations. And, after a short pause for a rest, we will start flat out with the preparations for 2017.”