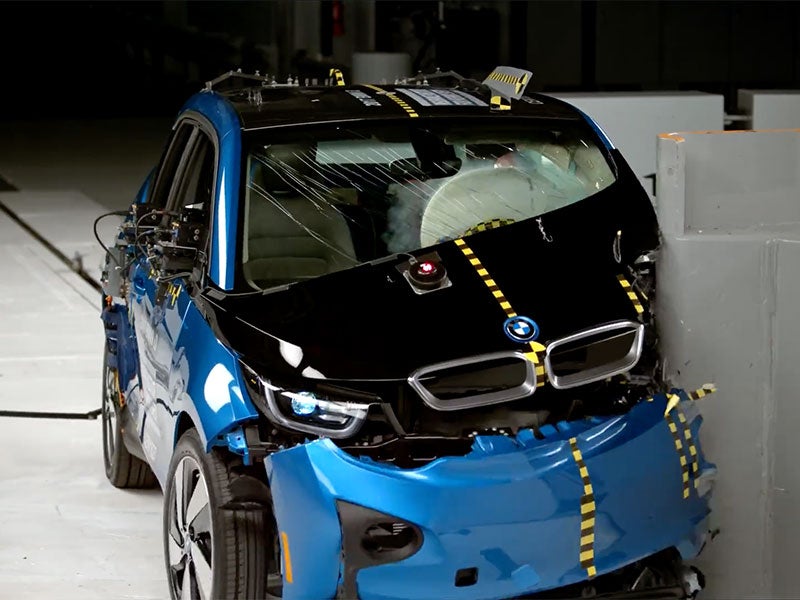 Just because it's the "Most Loved Car in the U.S.," doesn't mean it's also the safest. The Insurance Institute of Highway Safety announced that the Tesla Model S failed to earn a Top Safety Pick+ designation.

The IIHS's Top Safety Pick+ award is given to vehicles that achieve a rating of "good" on all five of its crash evaluations and have an available front crash prevention system that earns an advanced or superior rating. Vehicles that also come with "good" or "acceptable" headlights earn the "plus" award.

In Tesla's case, the seat belt's placement didn't restrain the dummy's torso enough during the test, causing the head to move too far forward and hit the steering wheel through the airbag. The impact could result in injuries to the head and lower right leg during a collision. These findings apply to 2016 and 2017 Model S cars built after October 2016.

But that's not its only shortcoming. Not all Model S vehicles have automatic braking—which is normally a standard feature, but isn't yet available on models built after October 2016. Tesla Model S vehicles equipped with the second-generation hardware package have temporarily lost this feature. However, it will eventually return through an upcoming over-the-air update later this year.

Some variants of the Model S performed better than others due to the different weights. The P100D has a larger battery pack and weighs more, which causes it to perform worse on roll-over tests than lower-range trims. Another reason it didn't win the IIHS Top Safety Pick+: Its only available headlights earned a "poor" rating.

BMW i3 Only "Acceptable" in Head Restraint Test and Headlights

Tesla's sedan wasn't the only electric vehicle that didn't achieve the highest award from the IIHS. The 2017 BMW i3 also failed to meet the institute's stringent standards. The compact electric car earned only "acceptable" ratings in the head restraint and seat evaluation, which measures a vehicle's ability to prevent neck injuries in a rear-end crash. Its headlights also earned only "acceptable" marks.

But this doesn't mean that all electric vehicles are unsafe. The IIHS notes that 2017 Chevrolet Volt and 2017 Toyota Prius Prime are plug-in hybrids that collected IIHS Top Safety Pick+ awards.

"There's no reason the most efficient vehicles can't also be among the safest," said David Zuby, IIHS executive vice president and chief research officer in a news release. "We hope Tesla and BMW will continue to refine the designs of their electric models to maximize driver protection and, especially in the case of Tesla, improve their headlights."

Tesla says it made a change to its production line on January 23 that modified its seat belt position to address the head-contact problem, and will deliver a new vehicle for IIHS for small overlap crash testing. The headlights, however, may still leave a lot of room for improvement.

A Tesla spokesperson provided The Drive with the following statement:

"We are committed to making the world’s safest cars, and Model S has previously received a 5-star safety rating from the National Highway Traffic Safety Administration and a 5-star rating from Euro NCAP. Model S still has the lowest ever probability of injury of any car ever tested by NHTSA.

We proactively develop updates and aggressively implement changes onto the production line in record time any time there is a substantial benefit to customer safety. One of the improvements recently introduced in January 2017 specifically addresses the “Acceptable” (or second highest) rating that the Model S achieved in the small overlap frontal crash test, and we expect new tests to yield the highest possible rating (“Good” rating) in the crashworthiness category.

Additionally, IIHS tested a vehicle that was in transition with new Autopilot hardware, but without the new software that enables Automatic Emergency Braking. In the coming weeks, Automatic Emergency Braking will be deployed via a free over-the-air software update, and IIHS will be testing a new vehicle. We expect to receive the highest possible rating in every category, making Model S eligible for the IIHS Top Safety Pick award."