A peek into an alternate timeline where we got a Dodge version of the lauded Evo X. 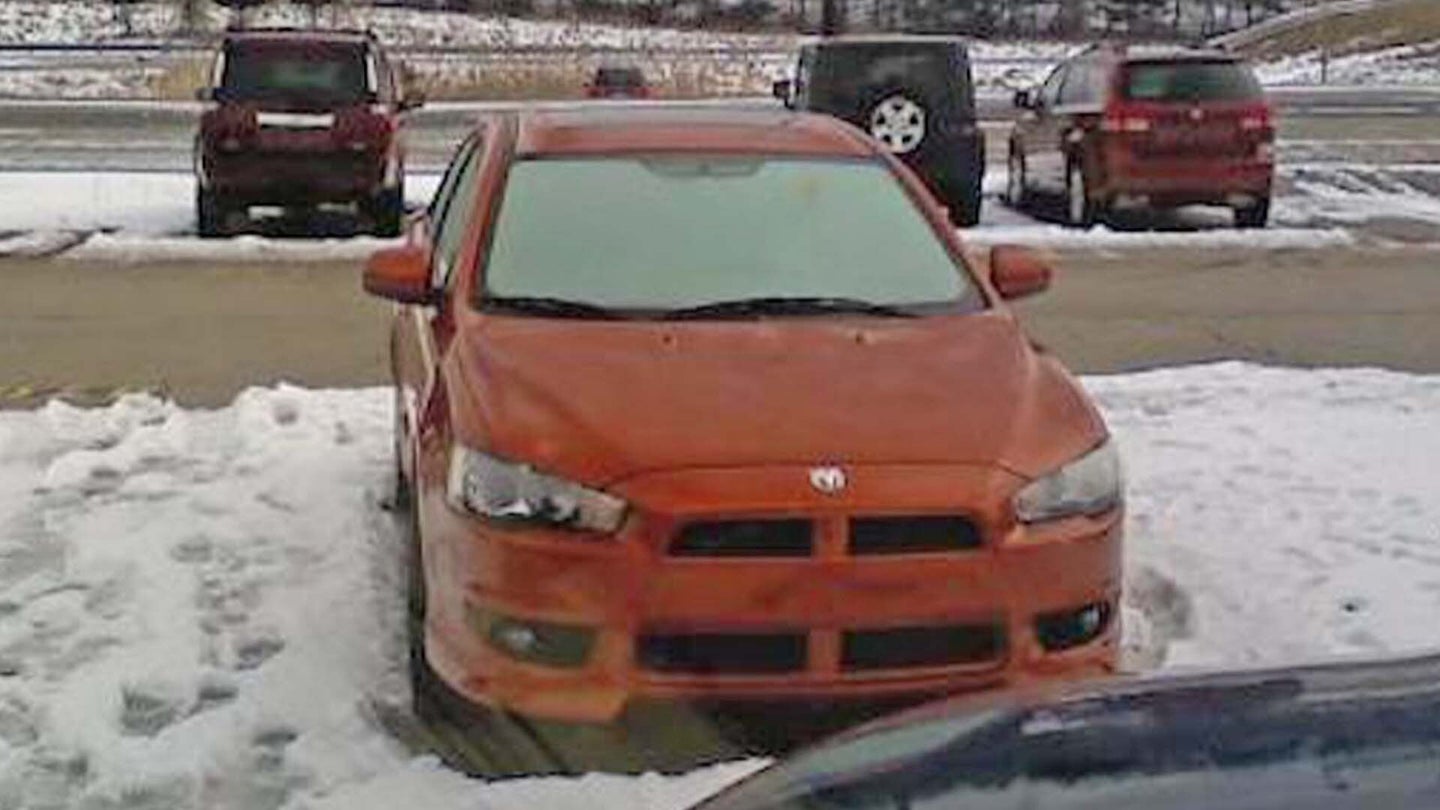 If Chrysler's "Prangler" prototype has anything to teach us, it's that some truly unholy things go on behind the closed doors of car companies' prototype shops. Be it because of its innumerable partnerships with rivals, or simply whatever's served in the cafeteria there, Chrysler's, in particular, seems to churn out more oddities than most, another of which came to light in pictures posted Wednesday night to social media. They show a slightly restyled Mitsubishi Lancer rebadged as a Dodge Caliber, which was reportedly meant to spawn a Lancer Evo-equivalent coupe that would've brought honor back to the SRT4 name.

The pictures you see here came from a since-deleted Reddit post, whose author claims to have taken them in 2010 at the Chrysler Technology Center in Auburn Hills, Michigan. They granted The Drive permission to use them under the condition of anonymity. The images depict what is very clearly a 2007-2017 Mitsubishi Lancer with Dodge's signature crossed-bars grille and Dodge badging, which presents it as a Caliber SXT. 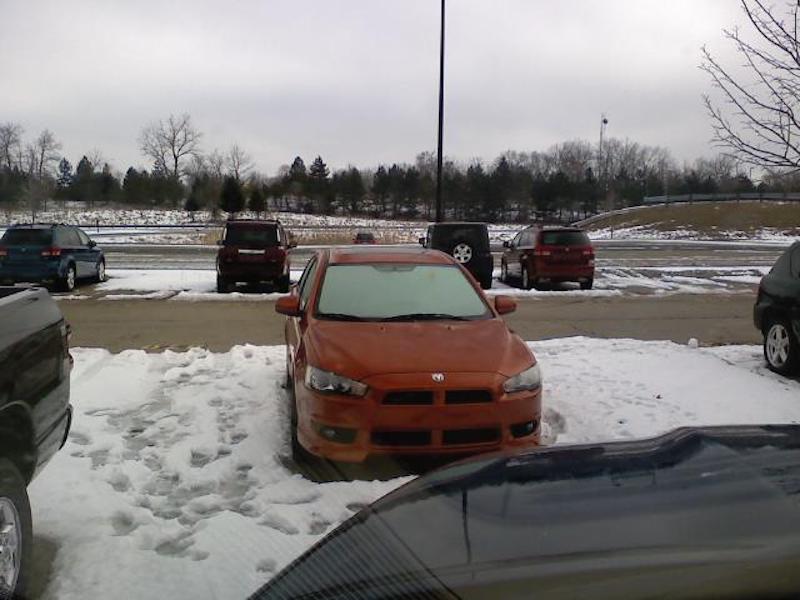 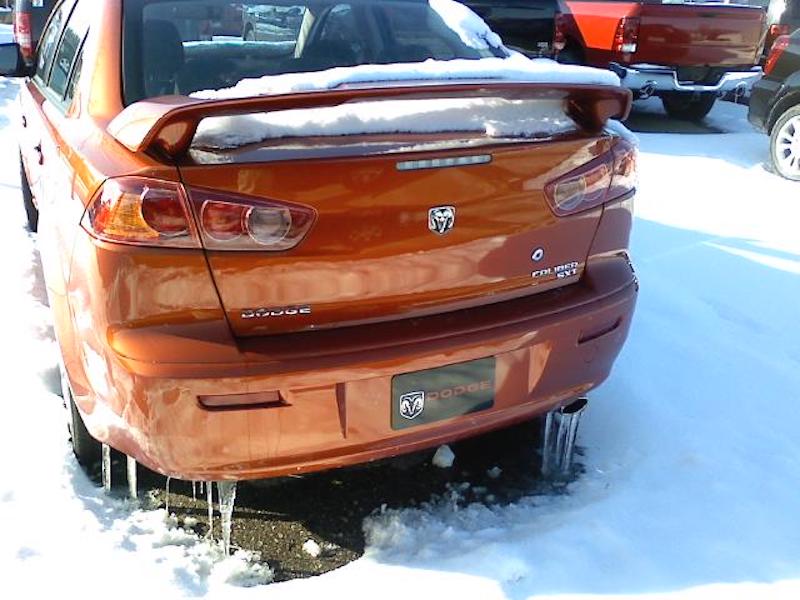 "I had just started at Chrysler in early 2010 and had to go out to 'lot 27' a lot to pickup/dropoff test vehicles," the Chrysler employee who snapped the photos told me. "Lot 27 is one of the larger outdoor storage lots on the grounds. A lot of the parking lot is clearly visible from public roads and wasn't considered secure at all. A lot of spy shots are taken of this lot when car-covers were missing due to negligence and/or weather. Anything really special was supposed to be parked in one of many other secured lots."

"I made a lot of trips out there just to ogle, because there was also a Viper ACR-X, the Dodge Envi electric car, European competitive cars, crashed cars, and this 'Dodge Caliber.' I took a lot of 'illegal' pictures over the years just for memories, this was one that I almost completely forgot about and always wanted an answer to."

Sources inside Dodge couldn't identify this prototype and disputed its reason for existence, with one stating it "may have been a vehicle for Mexico"—another, meanwhile, emphatically disagreed with that. I reached out to Mitsubishi to see if it had its own explanation, but I may have already found the answer as there appears to be some indication of this Caliber's origin online.

Dodge was planning to replace the Neon after its discontinuation in 2005 with a sedan called the Rebel, jointly developed with Mitsubishi on a shared global platform. A version of this platform already underpinned the Caliber crossover, as Allpar reports, which on its introduction in 2006 precluded Dodge's need for another compact car. This apparently left the jointly developed model to debut in 2007 as the new Mitsubishi Lancer, which in turn spawned the Dodge prototype seen here.

As this Caliber sedan was badged SXT rather than SRT and didn't have the Lancer Evolution X's rear spoiler, it's definitely not Dodge's equivalent to the Evo; a car we don't know for sure ever existed—though Allpar claims one was in the works. They say Chrysler played a significant role in the Evo X's development, with the engineering team behind the esteemed Neon ACR contributing expertise, and Chrysler itself apparently helping develop a two-door version (presumably a Dodge exclusive) that never saw production.

It's not clear why the Dodge Caliber sedan—and thus Dodge's rumored SRT Evo—never saw production, though the available evidence doesn't make it difficult to guess. At the time the photo was taken, the Caliber crossover was barely a year from discontinuation, its sales having plummeted in the wake of the recession, due in part no doubt to its poor critical reception. Why Chrysler didn't ditch the Caliber name for Rebel is beyond me, though why it chose not to revert to selling rebranded Mitsubishis as it did in the '90s is understandable.

By that point, the Dodge Dart was nearly ready to fill the hole the Caliber would leave, giving Chrysler little reason to resell Lancers, and thus, its own version of the Evo. Sadly, that means the car one imagines would've marked a happier finale for the SRT4 badge than the Caliber SRT4 never saw the light of day. These prototype shots still fuel the imagination, though, and make one wonder if they'd have stood in for the Charger in an F&F franchise film or two.

Know the true story behind this unusual Dodge prototype? Send it my way at james@thedrive.com