Sean Lee is a Taiwanese immigrant but he gives so much back in charity because he’s a proud Asian American.

Look at any of the social media posts that came out of May 1’s and 16's Stop Asian Hate rally and drive events and you’ll know a movement is underway. Thousands of owners came out and brought their cars to show support. There was a car show. There was even a lion dance.

Wrapping up at Hing Wa Lee Plaza in Los Angeles, California, May 1's rally was organized in part by Purist Group, one of the more prominent automotive charities in Southern California. Actors like Daniel Wu and Sung Kang were there. Larry Chen was there. Maybe you were there. And at the heart of it all was Purist Group founder, Sean Lee.

“There’s a lot of friction between the Asian community and other ethnic groups,” Lee explains in a recent interview. “A lot of people think it’s fake news that Asians are being attacked. They say, ‘There’s no such thing as Asian hate.’” The rallies were his way of bringing “awareness to the problem.”

Lee tells me that about 1,000 cars showed up to the first rally and he estimated between 1,300 and 2,000 people were in attendance. And seeing as the whole thing was free, attendees were encouraged to donate to the Support the AAPI Community Fund. A second rally, which took place this past weekend in San Francisco, drew similar crowds.

Lee founded Purist Group 10 years ago, which started as a Yahoo group of 30 to 40 people called Canyon Friends (Lee credits his love of cars with playing Gran Turismo when he was young). It began as a group of enthusiasts who loved driving their cars in the canyons of Southern California. But when it grew, Lee moved it onto a private, invite-only Facebook group.

At the time of this writing, it has nearly 8,000 members. Along the way, satellite Purist Groups have also popped up. Now, there’s Purist Group Asia and Purist Group Taiwan—home to between 20,000 to 30,000 members, by Lee’s own estimates.

Purist Group is more than just an automotive enthusiasts’ club, though; it’s a charity organization, too. Lee is “semi-retired” (he calls it) from a career in logistics, so he devotes his time to giving back. (His ultimate dream  is to go back to Asia and start an orphanage.) Over the years, Purist has donated backpacks to schools and toys and supplies to households that needed them.

Talking to Lee, you can hear the pride in his voice when he recalls what the organization has done. “Every year, we [donate] maybe 4,000 to 5,000 backpacks fully packed by ourselves,” he tells me. “Also, we do an event to help the homeless. Events to help the cats and dogs. Sometimes law enforcement or some unique individual needs help—we help them.”

Lee doesn’t personally make any money from donations, by the way. “Every event is pretty much out of my own pocket,” he says, which makes it easier to respond to people who inevitably question where he gets the money to buy his cars. “I have zero relationships in the automotive world. I don't sell parts. I don't sell cars. I don't sell anything,” he explains. “I'm just a guy who likes cars, they’re my interest. Then, from that interest, came Purist and Purist is now an organization that helps people worldwide.”

For Lee, being Asian is a huge source of pride. He sees his ethnicity and charitable pastimes as going hand-in-hand. “I'm very proud to be Asian,” he says. “And I'm very proud to be an Asian American on American soil. I could just sit back, relax, enjoy my retired days, and play around with cars. But I'm doing the work because I want people out there to understand that Asian Americans are doing so much charity for America not because we have to, but because we respect the country. Because America needs it.”

Lee himself is an immigrant to the United States from Taiwan. He said his father was abusive to him and his mother, leading to his parents' divorce when he was five and his mother's departure for the U.S. “It was extremely violent,” Lee remembers. “I got my head banged against the wall, he broke my bone.” Lee would later come to the U.S. to live with his mom at 14.  When he got here, he found his mother was “pretty much an alcoholic” and “taking [a] huge amount of prescription drugs.”

Eventually, his mother told him she didn’t want him around anymore. “That's why I left you when you were five,” she told him “You were created to save a marriage, but you couldn’t.” So Lee ran away from home. At 17 years old, he hit the streets alone.

“Unfortunately, I ran into problems,” he says. “I joined an Asian gang for a while and hung out with them because they fed me.” Lee does not dwell much on this part of his life in our talk. Instead, he moves on, telling me, “After that phase was over, I decided to get a real job and started working as a busboy and delivery person.”

In making deliveries for one company, Lee recalls the general manager coming to him one day and telling him to go back to school. “I came here when I was 14,” Lee explains. “When I ran away from home I was 17. I had only three years of English and not a lot of education. [The manager] told me, ‘You have to go into typing.’ He actually paid out of his own pocket and sent me back to school to relearn all that.”

It paid off. Lee was able to work his way up and became the company’s “number one” salesperson. He left that company, joined another called Air Tiger Express, and worked his way up there, too, eventually becoming the top salesperson in the entire company.

“I saved the money I had and bought some shares of the company,” Lee goes on. “I was the youngest shareholder and vice president there.” After Air Tiger Express sold about 12 or 13 years ago, Lee could retire. He’s 50 now. You can do the math.

Looking back, Lee acknowledges the people who took a chance on him. “I would never be where I am today if it wasn't for my boss who gave me a chance,” he says. “Go back to get educated. Go back to learn typing. If I did not learn how to type, I would never have been able to learn how to do operations. Then, if I’d never learned accounting, I would never have been able to do a lot of the things I could do later on. It's crazy that I only have a high school degree and for a while I was running a $600 million company. And now look at today. Thirty years later, I'm sitting here, semi-retired, and I have all these crazy cars I can play with.”

Asians are often stereotyped by our commitment to education, but it’s a value that Lee believes is important.  “We as Asian Americans should continue to educate ourselves better. Make sure our kids grow up with the proper ethics,” Lee says. “Make sure we keep our family together and build a community together. You can never be strong just by yourself. You're always stronger when you have other voices that are there to help you.”

The idea of community is why Lee uses the Purist Group platform to feature prominent Asians. “I write up features on people or try to interview them so they can get their name out there so others can know what they are doing,” Lee explains. For example: “The automotive industry in the United States is very, very white. Top designers are very seldomly Asians. They’re mainly Europeans or Americans. We have to help broadcast as many Asians in the automotive industry as we can to get them known. Then they have to continue building upon themselves—continue to fill themselves with knowledge—so when that moment comes, they're ready and they can shine.”

But the recent attacks on Asians have spurred Lee to act more. He recalls a recent altercation at a gas station where, for no reason, a guy told him to “move your fucking car, chink.” And when Lee ignored him, he kicked Lee’s car and said, “Fuck you. Go back to China, you piece of shit.”

So Lee reported the guy to the police. Not because he expected the police to do anything about it, but because you need the receipts. “File the report, then the police have the incident on file,” Lee says. “Who knows what this guy is going to do next time?”

As Asian Americans, we are accustomed to being told to keep our heads down and stay out of trouble. But that’s not going to fix anything. Lee encourages everyone to report these kinds of incidents to the police. “A long time ago, I was like, ‘Screw it. Doesn't matter. Okay, my car got kicked. As long as everybody’s okay, let's go home.’ But that day, I insisted that the police write up the report. I don't care what the results are going to be. I just want a report number to tell people this actually happened.”

Lee brings up the recent spike in anti-Asian hate crimes. While it’s almost certainly from an increase in actual hate crimes, he also believes the numbers are attributed to people finally coming forward about it. “People are finally reporting it,” he says.

Lee is grateful he has influential friends like Daniel Wu, Sung Kang, and David Lee (the Ferrari collector) stepping up and making their voices heard. “I told them, ‘You guys have such a big influence, you have to come out and make a stand,’” he says. “You're not doing it just for yourselves, it’s for your fellow Asian Americans here in the United States. You're also doing it for your kids and their future.” 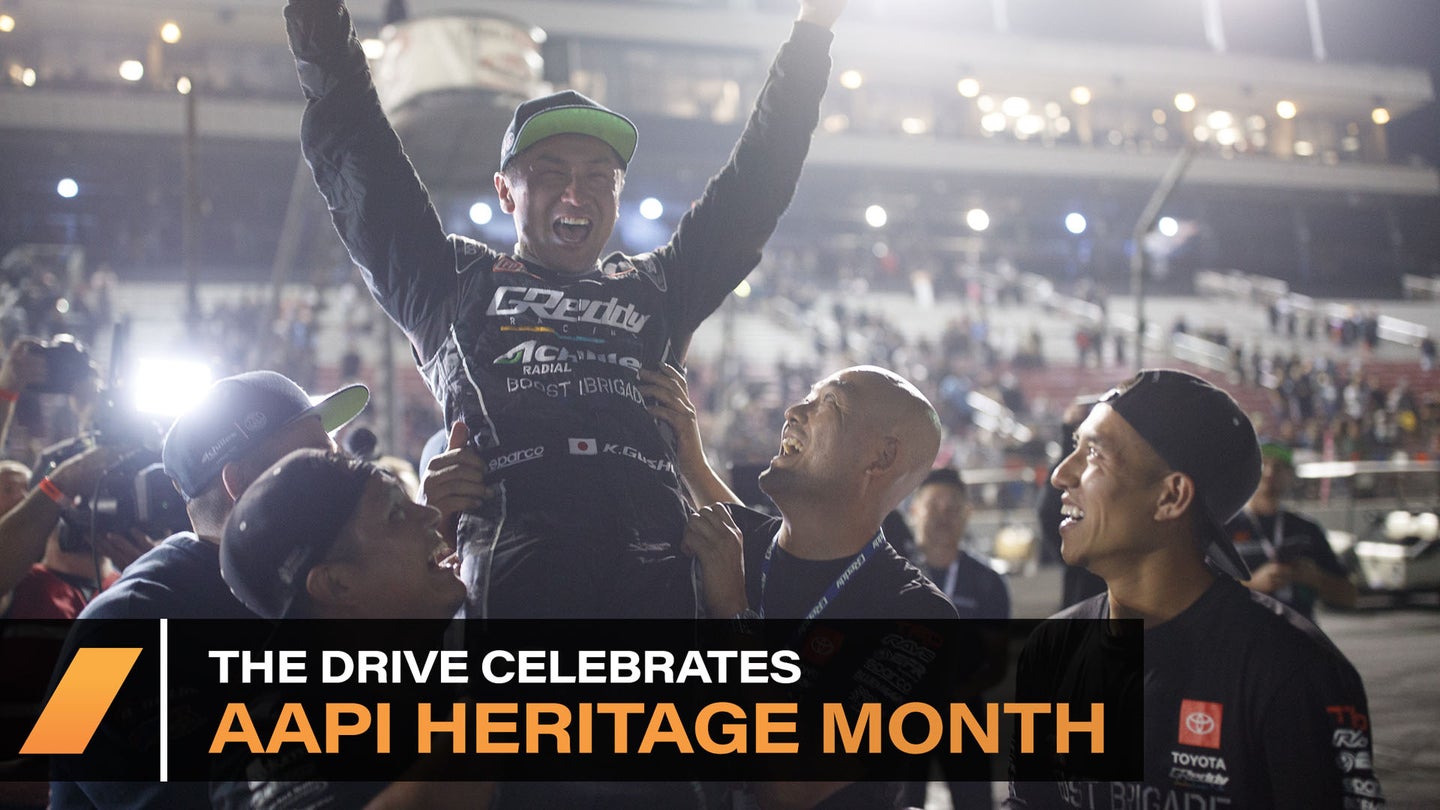 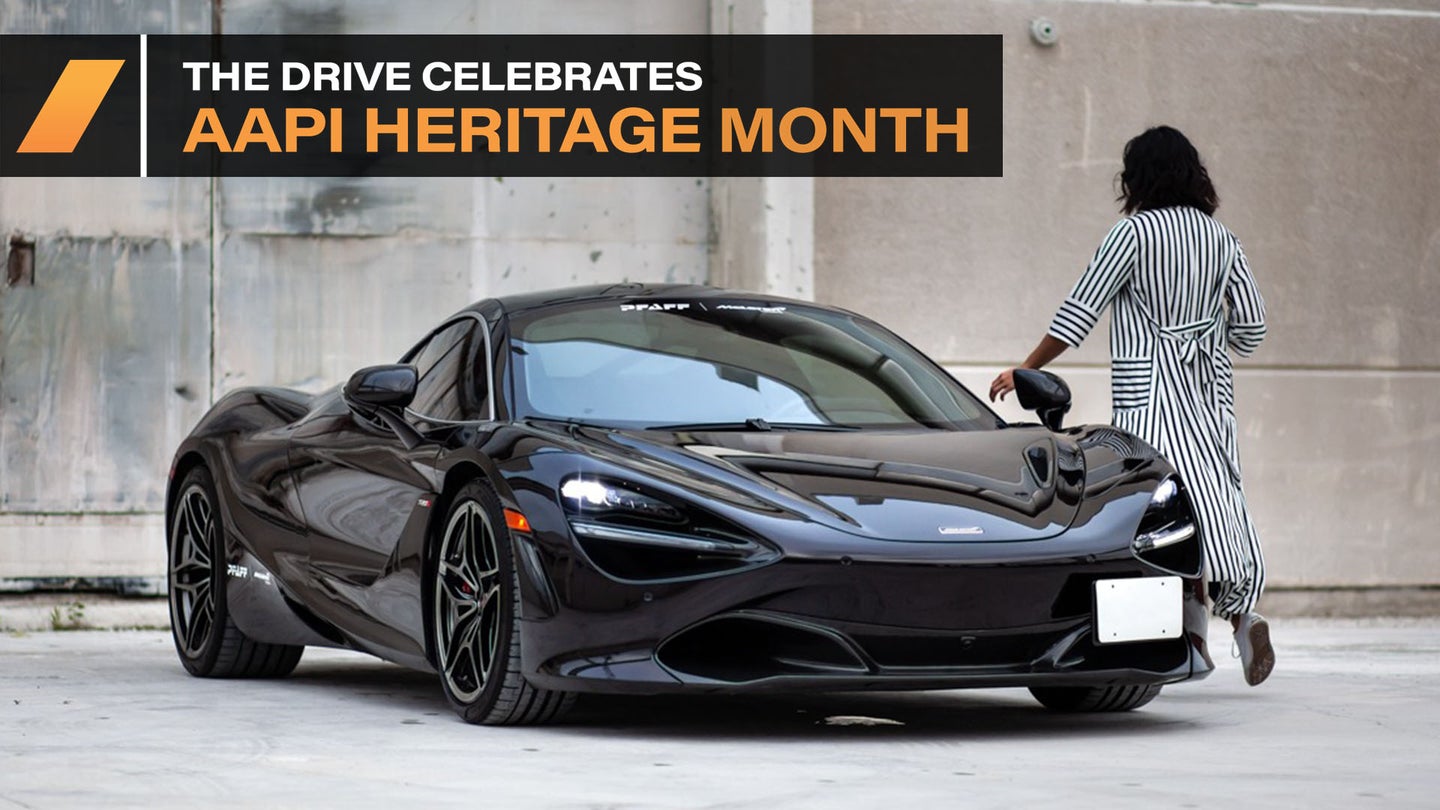 Jodi Lai Is Done Trying to Fit Into Car Media. She Doesn’t Want You to, Either

AutoTrader Canada‘s first-ever editor-in-chief talks gate-keeping, inclusion, and being an Asian woman in the automotive industry. 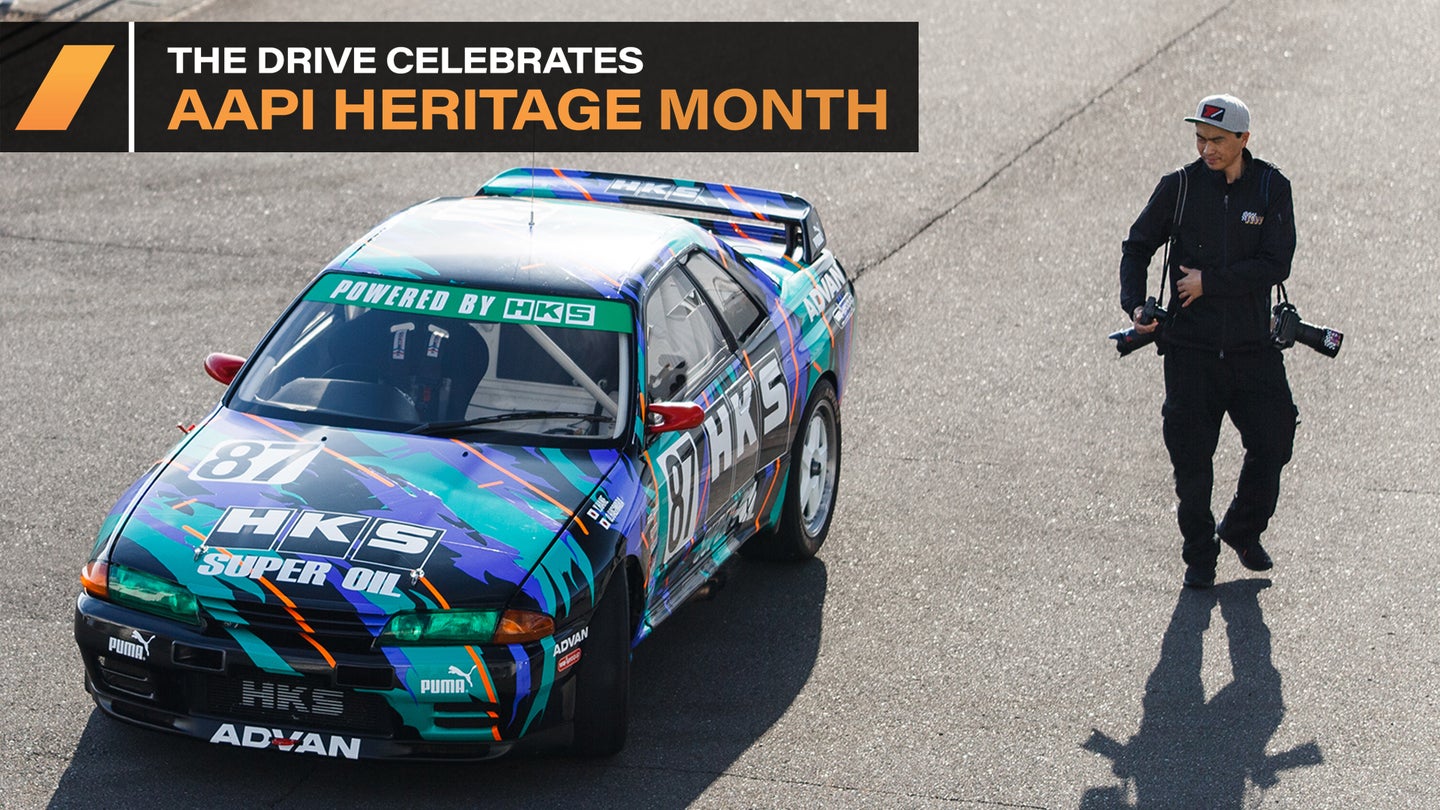 If you have any interest in automotive photography, you’ll be familiar with Larry Chen’s work. 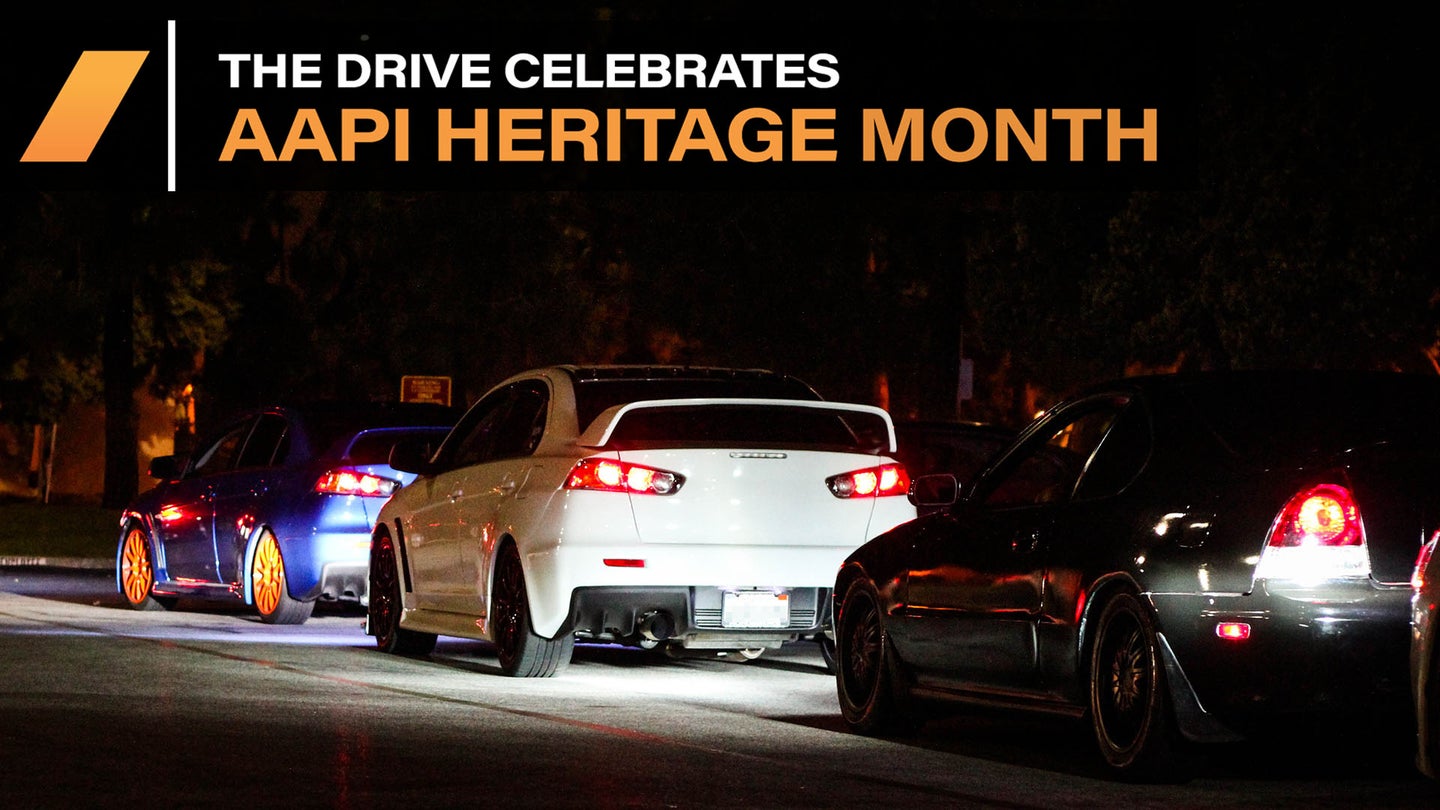