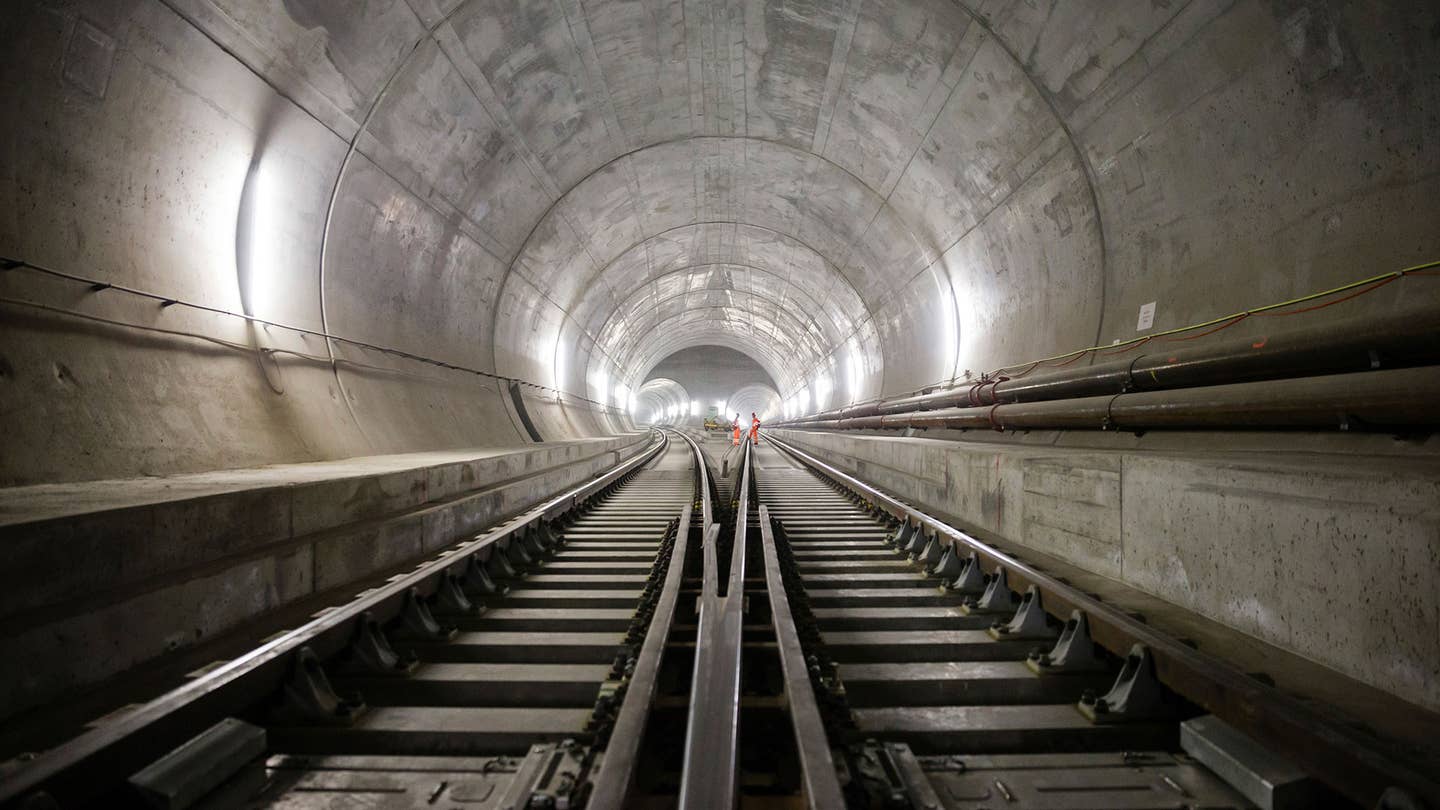 The world's longest, deepest train tunnel officially opened for business in Switzerland today, welding together two towns on either side of the Swiss Alps with a double-barrelled 35-mile link that promises to revolutionize passenger and freight rail across Europe.

The Gotthard Base Tunnel, as it is officially known, is more than two miles longer than the former record-holder, Japan's Seikan Tunnel. At its deepest point beneath the Alps, the Gotthard Tunnel lies almost one and a half miles beneath the surface.

Once the tunnel is operating at full capacity later this year, around 260 freight trains and 65 passenger trains are expected to pass through the tunnel every day.

The tunnel's benefits will stretch over to the streets, as well. Thanks to the tunnel's freight-carrying capacity of more than 400,000 tons per day, nearly a million fewer trucks will be needed every year to haul cargo around the Continent. It will also knock roughly an hour off the rail journey from Zurich to Milan, as passenger trains will able to blast through the 35-mile tunnel in as little as 17 minutes.

While Swiss president Johann Schneider-Ammann presided over the opening ceremony, German chancellor Angela Merkel, French president Francois Hollande, Italian prime minister Matteo Renzi, and Austrian chancellor Christian Kern all attended the tunnel's inauguration, in a sign of the route's importance to trade and travel across the European Union. The project, Schneider-Ammann said, was " [a] giant step for Switzerland, but equally for our neighbors and the rest of the continent," according to the BBC.

The Gotthard tunnel replaces a line traversing the Alps that sits thousands of feet higher in elevation; due to the outgoing track's winding design and spiral approaches to existing tunnels, only small trains of 1,700 tons or less can use it to cross the mountain range. The new tunnel is capable of accommodating traditional freight trains, which weigh roughly twice as much.

Excavation of the tunnels took 13 years, with roughly 31 million cubic tons of rock extracted from beneath the Alps by the four quarter-mile-long tunnel-boring machines. Enough concrete was used in building the tunnel to construct 84 Empire State Buildings, while enough copper wiring was used to stretch almost from Chicago to Los Angeles.

Oh, and the total cost of the tunnel? Around $12 billion. Which sounds like a lot...until you realize New York City has spent nearly $4.5 billion in the last 10 years digging out a four-mile tunnel under Manhattan for the Second Avenue Subway. Maybe Mayor de Blasio need to start hiring some of those Swiss engineers.