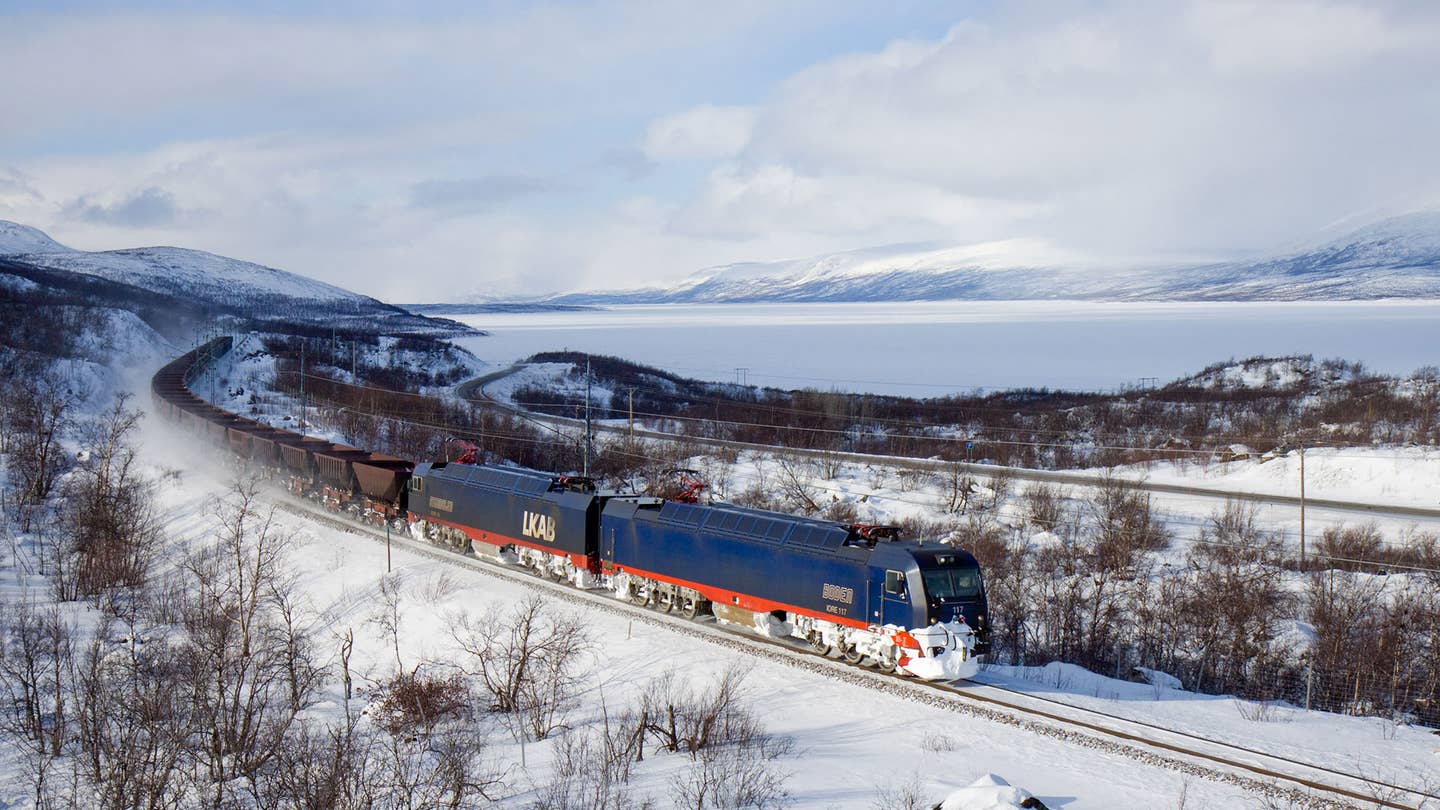 Though we’re currently in the thrall of another, newer mode of transport—the relatively cheap, small and free-ranging “car”—trains rolls right alongside Conestoga wagons as the vehicles that made America. When the Baltimore and Ohio railroad—the B&O of Monopoly fame—opened in 1828, it set off a frenzy of railway construction, itself facilitating an expansion towards and settlement of The West. Following the Stourbridge Lion, the States’ first steam locomotive, hundreds more soon sprang to life, eating coal, making steam and belching smoke.

Today, outside of train shows and historical reenactments have dropped coal in favor of electric, gasoline turbine or diesel power—sometimes, a combination of the three. Currently, the titans of the rails worldwide are, hands down, electric locomotives. While mid-century American bruisers like the General Electric DDA40X coursed with 6,600 diesel-electric horsepower, the contemporary electric motors from Russian and Chinese manufacturers can top 15,000 horsepower—as certain presidential candidates would have it, a geo-political diorama writ on parallel tracks.

International power struggles aside—if they can ever really be—machinery is machinery, and we will respect the numbers. Here are the nine most powerful locomotives in the world, almost all electric. Plus, one honorable mention, because every data spread needs a romantic denouement.

No, even a locomotive as charismatically-named as the GE Big Blow can’t stand against contemporary E-Trains. Still, when the locomotive debuted in 1955, it rocked (literally) with 8,500 horsepower emanating from a three-car set-up. The first held the control cab and a diesel generator; the second, an enormous oil-burning ten-combustion chamber gas turbine engine; the last, 24,000 gallons of fuel. That 8,500-horsepower rating was at an altitude of 6,500 feet and at 90 degrees. During cool months and at sea level, the Big Blow could push as many as 10,000.

As you’d expect for a train used by Swedish State Railways to pull iron ore south from the arctic circle to be processed, the DM3 is a mighty beast, making near 10,000 horsepower. Adorably, most of these locomotives are named: Viktor, Baron and Josefina still operate today.

Also used on the Malmbanan, or Iron Ore Line, the SLM just beats out the Dm3. Sibling rivalry?

After World War II, Germany needed a major infrastructure overhaul. Part of that plan involved fast passenger transport by rail. The DB Class 103s were originally built to go no more than 99 mph, but speed demands later found some models travelling at up to 120 mph—one even pulled a train up to 176.

For a time after it debuted at the Swiss Exhibition, the Ae 8/14 was the most powerful locomotive in the world. The reason the Swiss needed such power was because a major supply route, the Gotthard Railway, traverses the Alps; before the burly Ae 8/14, trains were split it half in order to get them over the mountain.

The VL85 is among the highest echelon of motors that patrol Russia’s famous East Siberian Railways. With over 12,000 horsepower, the locomotive can carry tens of thousands of political dissidents to icy work camps! (Just kidding.)

With so much grunt, the Datong HXD2s can carry over 7,000 tons of coal and are designed to do so even at temperatures of -40 degrees through the winter.

Iron ore is about as heavy a load as a train can bear. The IORE locomotives are built for Swedish mining company LKAB’s Malmtrafik division, in charge of railways, and spend their days hauling hundreds of tons of mined rock. The name comes from a combination of “iron ore” and “Eeyore,” spelled “I-or” in Swedish.

All hail Mother Russia: with 17,838 horsepower, the Novocherkassk 4E5K locomotive is the most powerful in the world. It seems like digital espionage isn't Russia's only path to power.

Two trains rammed each other head-on in the southern Italian countryside.

Two Freight Trains Have Collided Head-On in the Texas Panhandle

Russians Are Now Skijoring Behind Trains