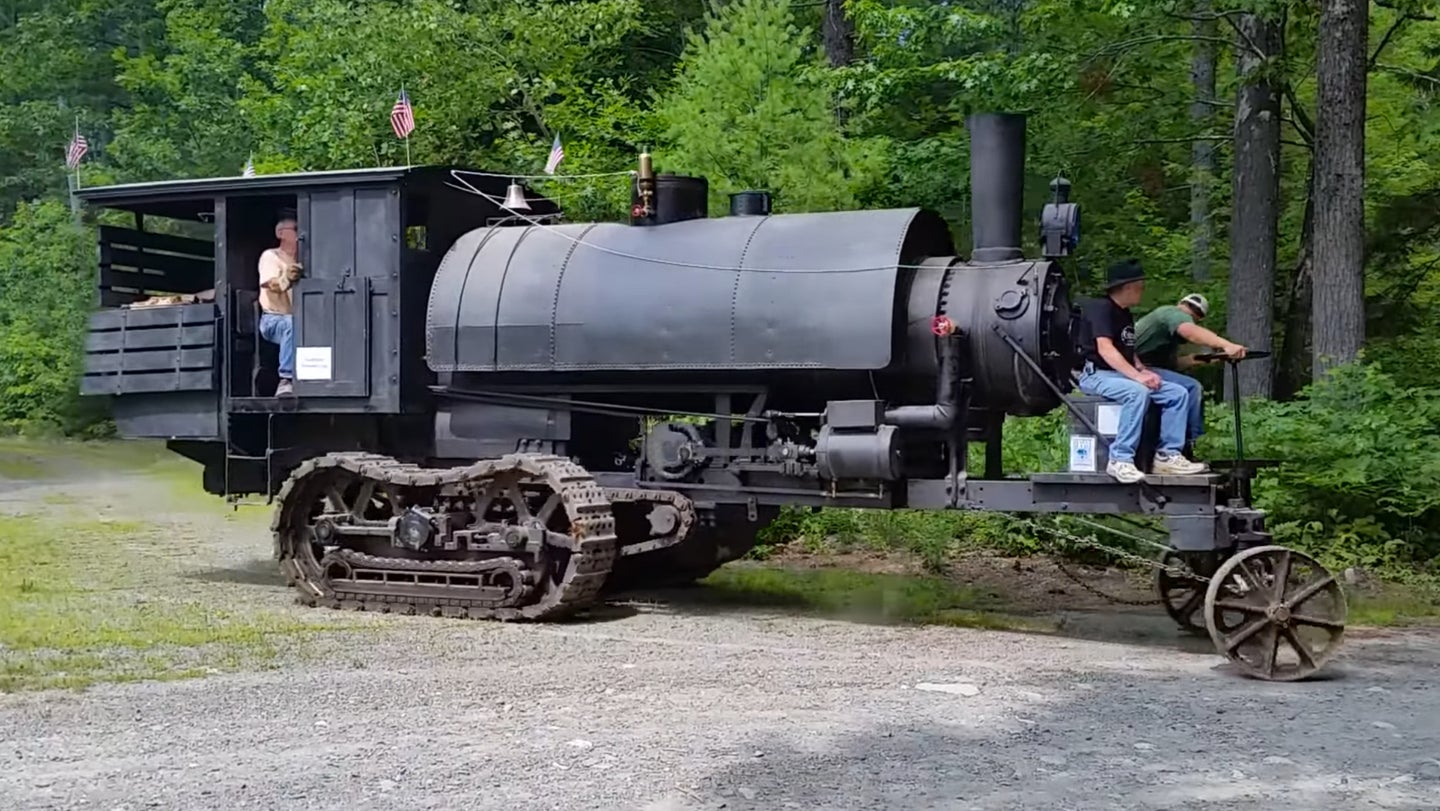 Before there were tanks, tractors, construction equipment and way too many

Some Lombard Steam Log Haulers have wheels up front, but most have sleigh-style runners, as the vehicle was designed to be used in winter snow.

According to Herb Crosby's video on YouTube, the vehicle weighs 19 tons, which is supported by roller chains on each side of the tracks. A steersman steers the Lombard Steam Log Hauler up front, and two others control the fire and speed of the vehicle behind the tank. Some built shelters for the steersman, as sometimes the ashes from the boiler stack could catch the steersman's clothes on fire, per Steam Culture. While it was built to be its own car-type vehicle, roads were built for it that were as wide and smooth as possible.

There is one steam cylinder on each side of the vehicle to power it. The Lombard Steam Log Hauler's boiler is only rated for about 100 horsepower, but the gearing allows it to carry an absurd amount of weight. The tank holds about 425 gallons of water good for seven to ten miles depending on what you're hauling. The steam was generated by a wood fire, where one cord of wood would take it roughly seven miles as well.

Believe it or not, this wasn't adapted from an existing locomotive, either—the entire vehicle is its own design.

This vehicle was, as its name suggests, patented in 1901 to haul logs—up to 300 tons of them, per Crosby. Archival footage shows it was pretty successful at just that, hauling multiple huge bundles of freshly cut logs at once, all on trailers hooked together like a train. This was a huge improvement over the oxen- or horse-drawn sleds that were used prior to the Lombard Steam Log Hauler's invention.

It also appears to have a real beast of a turning radius that makes my Lancer's look sensible. As Crosby explained, the steering ratio is 42:1, so the steersman also had to turn the steering wheel a lot for it to actually change direction. To put that in perspective, the average car steering ratio is between 12:1 and 24:1, per Car Bibles.

Fortunately, the Lombard Steam Log Hauler can also travel forwards and backwards. Unfortunately, it didn't have any brakes, which meant that sometimes log trains could jack-knife on hills, Steam Culture notes.

If you wanted to buy one, Crosby said they cost about $5,500 new, which would be about a couple hundred thousand in today's money. Just 83 Lombard Steam Log Haulers were built by Lombard's factory in Waterville, Maine, between 1900 and 1917, per the Maine Forest and Logging Museum. The design was later licensed to the Phoenix Company, which produced their own Phoenix log haulers. Many of the Lombard haulers were recycled for scrap during World War II, and only six are known to survive today.

According to Steam Culture, the Lombard Steam Log Hauler's continuous tracks were so successful that tracks made their way onto tanks in World War I, and the rest is history. All we're missing is a new 400Z on tracks. Your move, Nissan concept department.