Airlines Might Use This Basic Shield to Protect Passengers From Coronavirus

A low-cost solution or false sense of security? 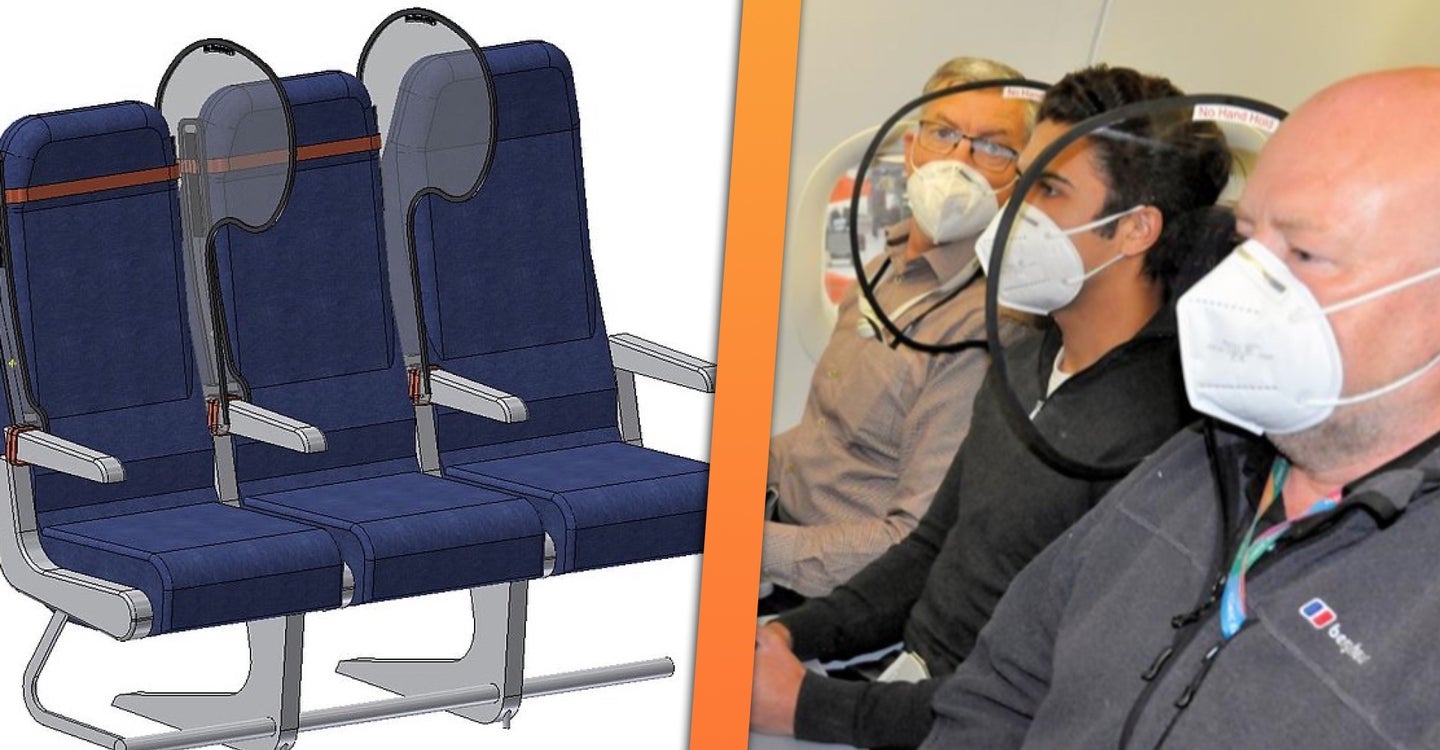 The world is slowly healing as the global Coronavirus pandemic—or, at least its first wave—winds down. Still, the population finds itself facing a more restrictive public environment in order to ensure that the curve of new cases continues to flatten and will need to adapt to what is being coined the New Normal. Of course, social distancing can't happen everywhere—especially in public transit—and accommodations need to be made. A company from the United Kingdom called RAS Completions realizes this need in consumer airplanes and recently developed a cost-effective physical barrier to allegedly help stop the spread of airborne infections.

You may recall a similar concept by a company called Avio debuting in April, meaning that the idea of a physical barrier between passengers isn't completely new. However, a revised product designed by RAS Completions is not only a more economical solution but undoubtedly more practical. Whether it is effective or not, that's up for debate.

The barrier works by mounting polycarbonate shields on the armrests of existing airplane seating, as out of the way as possible so as to not compromise the already valuable real estate. The transparent shields then extend to the top of the seat, forming a physical barrier between the faces of passengers to protect against person-to-person droplet transmission.

RAS says that this simple method not only allows airlines to continue transporting a large number of passengers but also provides an easily removable and minimally invasive solution.

"So far, protection solutions all remove the use of the middle seat, which isn’t a viable, long-term financial option for most airlines," said Roger Patrol, a business development manager at RAS Completions. "Our new PPW gives airlines a choice. We want to give people the confidence to return to the skies, and firmly believe this product will help them to feel protected while retaining much of the flying experience they are used to."

While it's fair to question the overall effectiveness of such a small barrier being the only means of personal protective equipment between passengers, both airlines and RAS recognize that something is better than nothing. However, that won't be the only challenge that airlines face—passengers also need to become comfortable with flying again.

"I think if you had the alternative which was nothing in between you and somebody you didn't know sitting a few inches away from you, I think I, for sure, would feel more secure if I had a little non-intrusive screen which gave me comfort that the airline, first of all, cared—and also gave me the opportunity to distance myself from somebody in very close proximity," Patrol told CNN Travel in an interview.

RAS says that its shields will be ready for airlines later this month and are currently undergoing testing by the European Aviation Safety Agency.