Lots of Testing, Lots of Masks: How Car Companies Hope to Restart Production

Today on Speed Lines: Unemployment soars in the auto sector. 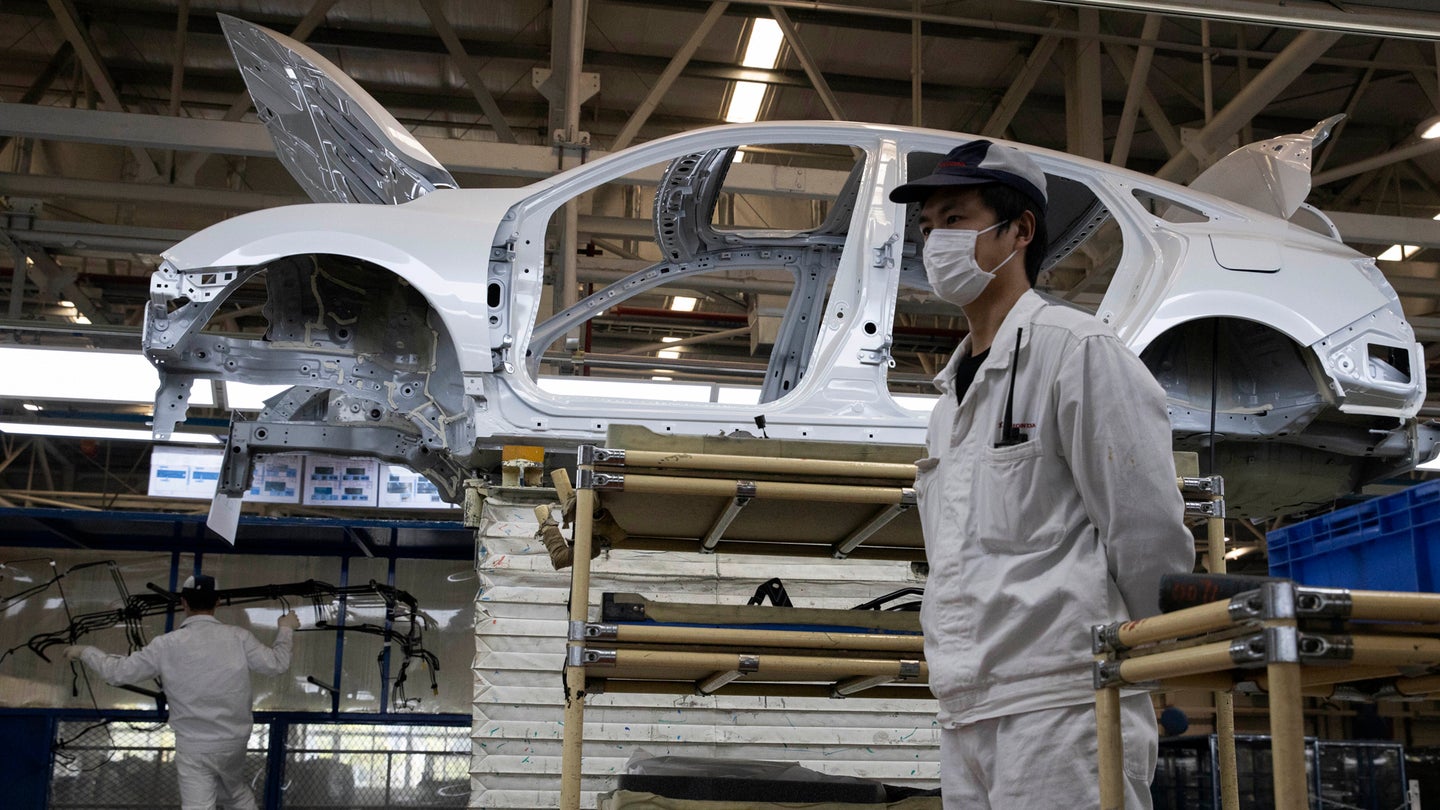 Welcome back to Speed Lines, The Drive's morning roundup of what matters most in the world of transportation. Today we're talking about restarting car production, unemployment, and Boeing. I'm just a ray of sunshine today.

Globally, only a handful of automakers—mostly in China, which is supposedly getting past the worst of it—have restarted new car production amid the coronavirus pandemic. In the meantime, this worldwide industry has ground to a halt at every level, from factories to suppliers to dealerships and beyond. The livelihood of millions of people is at stake.

Automakers are, obviously, eager to get production going again. But how do you do it without turning your factory into a coronavirus hot spot? The apparent answer, as Reuters reports, is extreme safety measures and lots and lots of testing. From the story, emphasis mine:

Certain safety measures differ from manufacturer to manufacturer. Italian sports car maker Ferrari NV (RACE.MI) said on Wednesday it would offer voluntary blood tests to employees who wanted to know if they had been exposed to the virus.

General Motors Co’s (GM.N) head of workplace safety, Jim Glynn, told Reuters on Wednesday GM is not persuaded blood tests are useful. But Glynn said GM has studied and adapted measures taken by Amazon.com Inc (AMZN.O) to protect warehouse workers, such as temperature screening to catch employees with fevers before they enter the workplace.

Auto manufacturers and suppliers are converging on a consensus that temperature screening, daily health questionnaires, assembly lines redesigned to keep workers 3 to 6 feet (0.9 m to 1.8 m) apart, and lots and lots of masks and gloves can enable large-scale factories to operate safely.

Anyway, as that story notes, the automakers have had smaller teams making ventilators, masks and other bits of medical equipment, so they've learned some lessons on how to do that safely while undertaking production. But this battle between protecting workers and getting manufacturing back up to speed will likely color the rest of this year in the industry.

Another 6.6 million people have filed for unemployment in the past week, bringing the grand total to more than 16 million and getting us closer to erasing the gains made since the last recession, the New York Times reports. It's a situation that's nothing short of nightmarish.

Of that, some 32,000 people come just from the Japanese automakers operating in the U.S. Honda and Nissan are doing worker furloughs, while Toyota just cut its temporary workforce, Automotive News reports:

Companies across the auto industry are taking measures to conserve cash as they face uncertainty both with regard to how soon they’ll be able to reopen operations and how long it will take for demand to recover. Tesla Inc. and BMW AG have also announced plans within the past day to furlough thousands more American workers.

Toyota is extending the shutdown of its North American vehicle and parts factories a third time, citing the coronavirus outbreak and weak demand. The automaker now intends to reopen the facilities on May 4, two weeks later than planned.

Again, even if they were back to making cars, who would be buying them with so much unemployment and general economic uncertainty?

Boeing's SNES-Era Computer Bit Them In The Ass

Now for a change of pace, let us turn to Boeing, the once-great American aviation empire under fire in recent years over the hundreds of deaths tied to its defective 737 MAX plane. Here's an interesting story from The Verge about how the MAX's lack of computing power has kept the planes from flying again (along with, you know, the fact that nobody's flying right now anyway):

Every 737 Max has two flight control computers. These take some of the workload off of pilots, whether that’s through full automation (such as autopilot) or through fine control adjustments during manual flight. These computers can literally fly the airplane — they have authority over major control surfaces and throttles — which means that any malfunction could turn catastrophic in a hurry. So it’s more important for manufacturers to choose hardware that’s proven to be safe, rather than run a fleet of airplanes on some cutting-edge tech with bugs that have yet to be worked out.

Boeing took that ethos to heart for the Max, sticking with the Collins Aerospace FCC-730 series, first built in 1996. Each computer features a pair of single-core, 16-bit processors that run independently of each other, which reduces computing power but also keeps a faulty processor from taking down the entire system.

Even by late-’90s consumer tech standards, the FCC-730s were behind the curve. By the time they went to market, Nintendo had already replaced its 16-bit SNES console with the Nintendo 64 (the first game console to use — you guessed it — a 64-bit CPU), and IBM had created the world’s first dual-core processor.

Though those computers are reliable, the story says, they simply cannot do all that's asked of them on the sophisticated 737 MAX. And while Boeing says it can fix the 737 MAX's problems with software updates, the hardware itself still significantly lags behind that of chief competitors at Airbus. As a reminder, we're talking about a federal bailout for this company as well.

‘What’s Safe to Do?’: NYC Museums Grapple With Preserving COVID-19 Artifacts (The City)

We’re on the Brink of Cyberpunk (Slate)

How to Get (Back) Into Biking During the Pandemic (Vice)

When does car production fully get back up to "normal" levels? I'm guessing the end of this year, maybe even early 2021.

GM will produce around 1.5 million masks per month on its own.

GM and Honda Will Build Electric Vehicles Together

And it sure sounds like they’ll be getting a version of Cadillac’s Super Cruise.

This Boeing 787 Just Set a Record for the Longest-Ever Passenger Flight, Thanks to Virus

Sudden airport restrictions and a half-empty plane meant flying from the South Pacific to Paris in a single shot.