That's one way to get your hands on one. 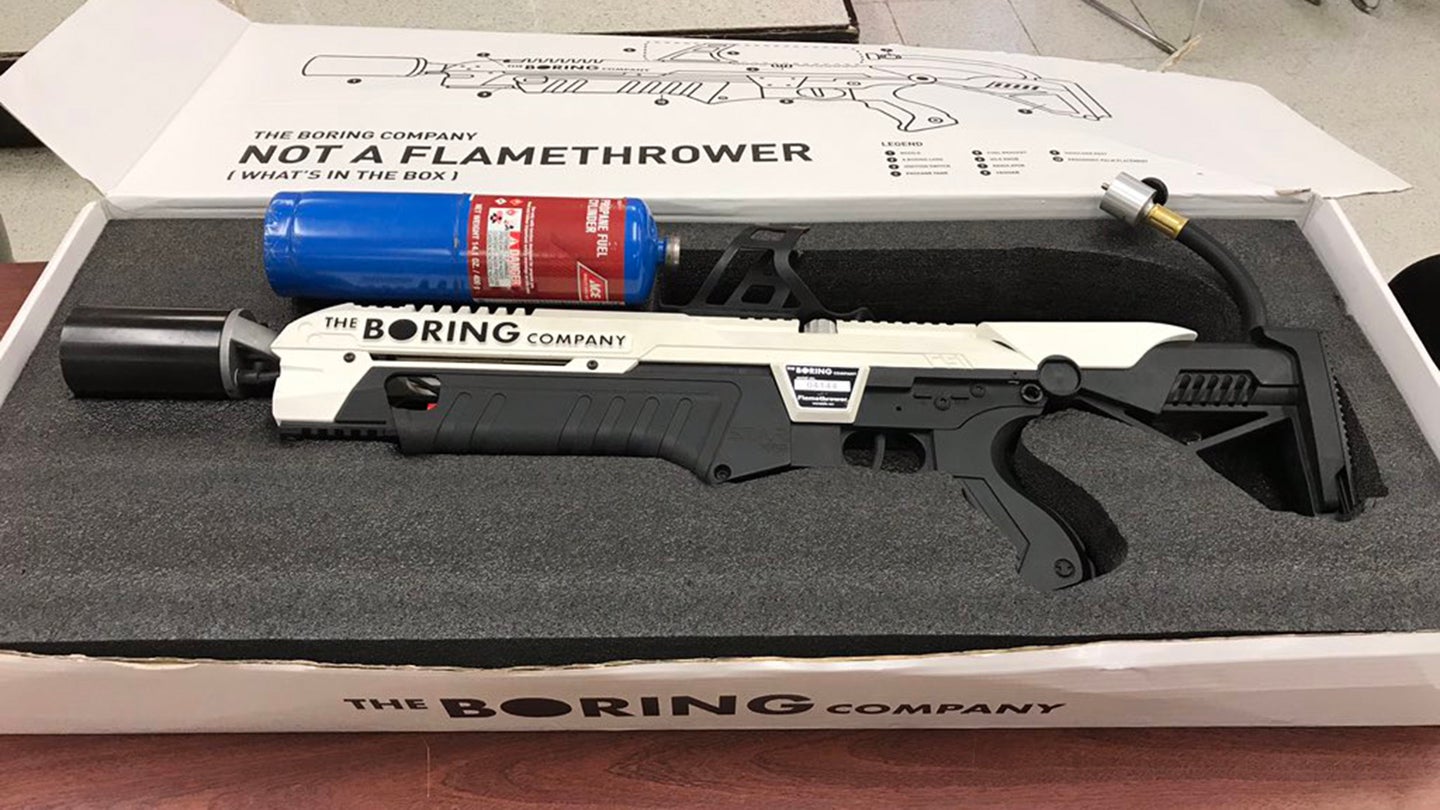 New York's finest are now in possession of a genuine Boring Company Flamethrower—sorry, "Not-A-Flamethrower"—after raiding a Queens building and confiscating it from a suspect barricaded in an apartment on New Year's Day.

News of the department's newest toy broke via Vice ​​​​after NYPD Commissioner Dermot Shea tweeted a photo of the coyly-named device, which was seized along with a Glock handgun, an extended magazine, and at least several pounds of marijuana. A novelty product dreamed up by The Boring Company (and Tesla) CEO Elon Musk as a wild promotion for his tunneling business, the Not-A-Flamethrower doesn't literally project fire and accelerant like a real one. It's essentially a glorified roofing torch, but one that's still capable of producing an impressive fireball.

As such, it isn't classified as a flamethrower by the Bureau of Alcohol, Tobacco, Firearms and Explosives, so it's not illegal to own on a federal level, nor is it illegal to possess in New York state. So we're not entirely sure why it was seized—given the circumstances, cops likely grabbed whatever looked dangerous from the scene. The other things in the photos are a little more problematic.

Still, lawmakers in New York have frowned upon Elon Musk's toy since it was first went on sale for $500 in January of 2017. Last June, the New York State Senate passed Senate Bill S1637 to try and target "recreational" flamethrowers, even calling it out The Boring Company by name. But as of this writing, the bill has not yet been signed into law.

As for The Boring Company itself, Musk's vision for underground mass transit has evolved since 2017 from parked cars riding on electric sleds to autonomous electric vehicles driving on a fixed track—just don't call it a subway. Projects are underway in several cities around the country, with a people mover system for the massive Las Vegas Convention Center due to be completed first in early 2021. There are some typically bold promises being made—using Model 3, Model X, and an unspecified 16-passenger vehicle built on a modified Model X platform, the system is projected to shuttle over 4,000 people an hour at speeds over 100 mph.

One thing the not-a-flamethrower has been successful at doing is igniting controversy. Musk has brought it out at various events, including the episode of the Joe Rogan Experience podcast where he infamously smoked weed on camera.

Even the brother of the late kingpin Pablo Escobar has chimed in, threatening to "take down" Musk over allegedly stealing the idea for the toy.

Despite it all, The Boring Company still sold all of its 20,000 novelty flamethrowers in just five days and netted a cool $10 million in revenue. While doing so, it also succeeded in creating a promotional hypebeast that is still lingering nearly two years later—used examples are selling on eBay for more than twice the original price.