This mid-engined test mule is being touted as “the rarest American muscle car in existence.” 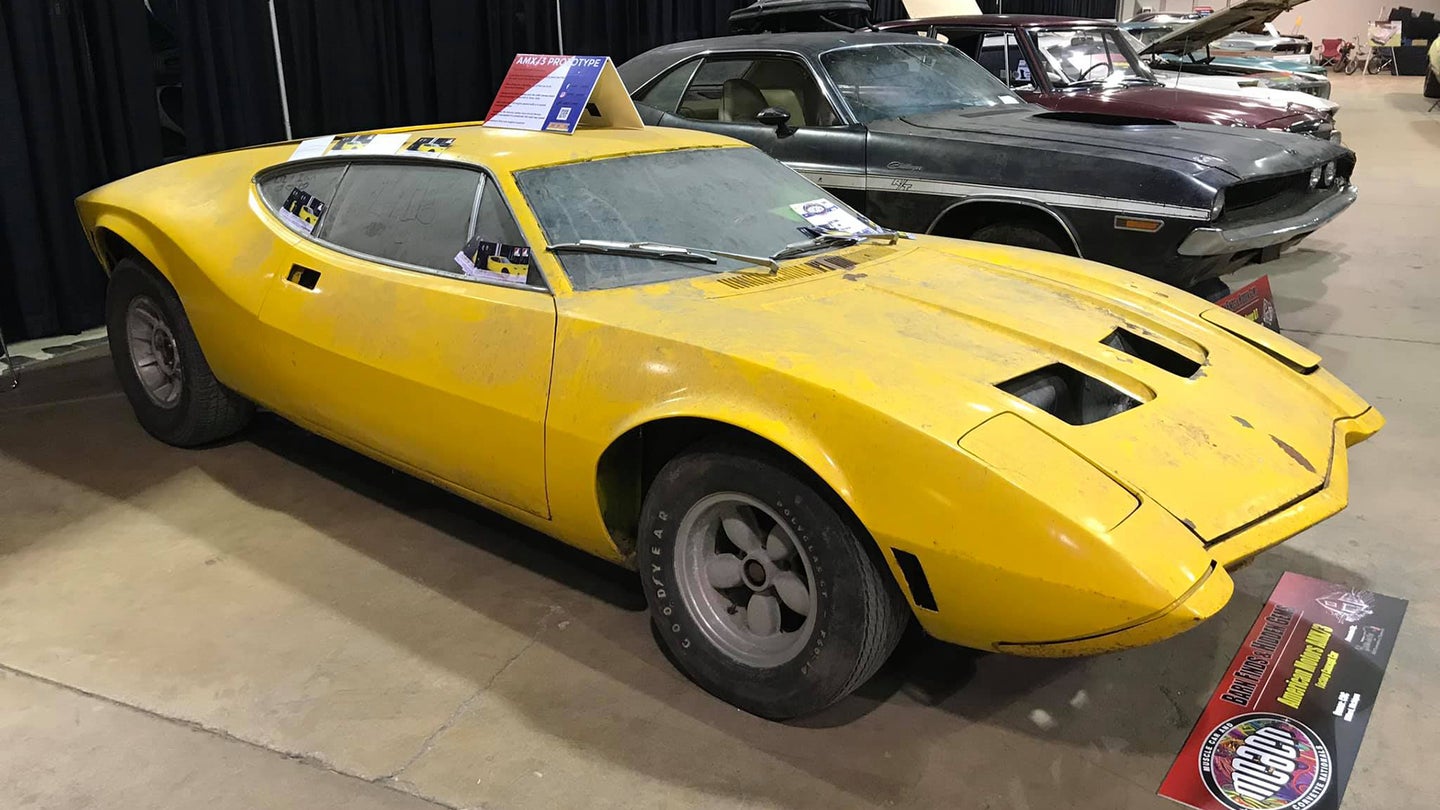 An incredibly rare AMC AMX/3 prototype that was recently unearthed in a Michigan barn will be getting an extreme makeover after sitting for nearly five decades. The prototype, which is being heralded as “the rarest American muscle car in existence,” is chassis No. 1 of just nine examples built as part of American Motor Corporation’s ambitions to produce a mid-engined exotic sports car in the late 1960s.

Chassis No. 1 was only just brought out of the woodwork and displayed at the Muscle Car and Corvette Nationals in Rosemont, Illinois for the first time since AMC canned the project long ago.

According to its history, this car was delivered to BMW engineers in Munich after AMC entered a gentlemen’s agreement with the German automaker. Famed automotive artists Giorgetto Giugiaro and Giotto Bizzarrini of Turin’s ItalDesign firm were even commissioned to pen the AMX/3. The plan was to produce a competitor to some of Europe’s greatest mid-engined sports cars of the era, following in the footsteps of the original Ford GT 40 as well as the DeTomaso Mangusta and Pantera.

ItalDesign was responsible for fabricating the bodies on the first set of prototypes while BMW was left to develop the chassis and suspension. BMW’s significant involvement with the project led it to designate the AMX/3 with the internal chassis code of E18. However, not everything went as planned.

After the first body came out of a small Livorno, Italy-based shop by the name of Autofficina, one Salvatore Diomante, an engineer for Bizzarrini, completed chassis No. 1 so it could go straight to Munich for testing. However, BMW’s engineering team noted that the car had serious flaws. It was poorly mended and Munich’s engineers found its frame flexed so badly under hard acceleration and braking maneuvers, it severely affected the AMX/3’s rear suspension and steering geometry and even broke welds.

That’s when ItalDesign took over to construct the remaining prototypes for testing and development. But before the project could even continue, BMW ended its testing program in January of 1970 and AMC called the program off altogether, leaving those nine prototypes, including the car you see here.

AMC then imported two of the nine cars already made for study while This example remained in Italy. It wasn't until October of 1972 that Dick Teague, AMC’s then-vice president of design, imported its shell into the states and then had it repainted from its original green color to the yellow hue that’s still on the car today.

Teague later sold it to a fellow AMC colleague, Scotty Dawkins, who then swapped in a 390-cubic-inch V8 from an AMX just to get the car to move. Dawkins moved to Alaska in 1981 and had it stored at the Gilmore Museum in Hickory Corners, Michigan where it sat awaiting a restoration until 1999, which is when he retook possession of the car.

Dawkins unfortunately passed away in 2016, leading his family to sell chassis No. 1 to AMX/3 specialists Michael Chetcuti and Kyle Evans.

It’ll now head to Classic Design Concepts in Milford, Michigan, which will perform a ground-up restoration.