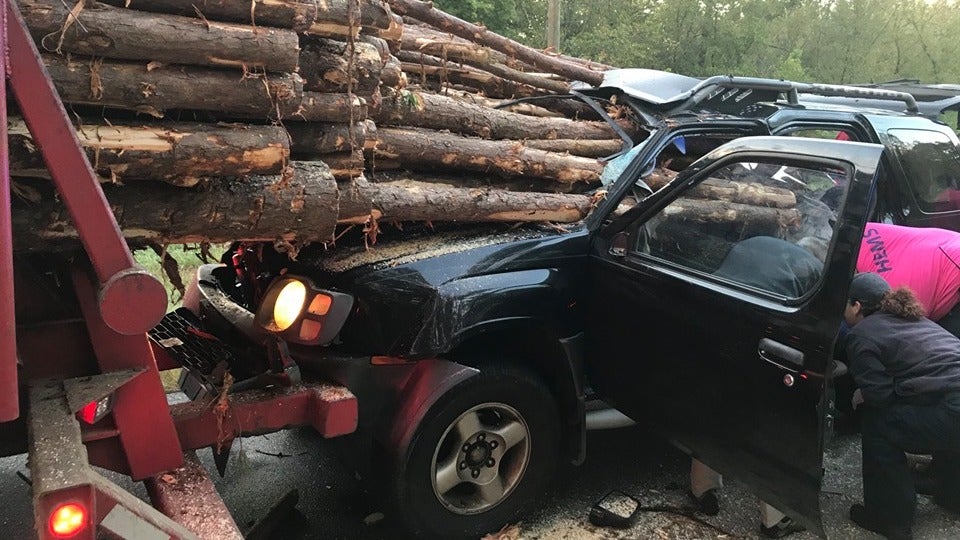 A Georgia man behind the wheel of a Nissan Xterra is lucky to be alive after rear-ending a trailer carrying logs. The massive logs, which as you can see on the photos below, speared the SUV through the windshield and then traveled the entire length of the vehicle all the way to the trunk.

According to a Facebook post by the Whitfield County Fire Department and details reported by CNN, the Nissan driver was traveling down Cleveland Highway in Georgia on the morning of Friday, Oct. 11. The unidentified man reportedly reached down for something he dropped and failed to see the truck in front of him slowing down. As a result, he collided with the trailer—and the rest is, well, pretty obvious. Because the driver was bent over, however, the logs deflected off the dashboard and left a space for his head.

"It was as if it was almost created just for his head," commented Whitfield County Fire Chief Edward O'Brien.

Though fortunate to be alive, the trapped driver had to wait out a lengthy extraction process. Firefighters reportedly had to cut between 30 and 40 logs with a chainsaw to even give their Advanced Extrication unit access to the driver's side of the vehicle, which reportedly took almost another 15 minutes to hack the roof support and doors out.

In the end, responders were rewarded with the relief that the driver was afflicted only with "minor injuries." Authorities reportedly have yet to confirm whether any charges will be filed in connection with the crash, though the Xterra driver will probably still feel the sting of his insurance premiums spike if he gets a ticket for distracted driving.