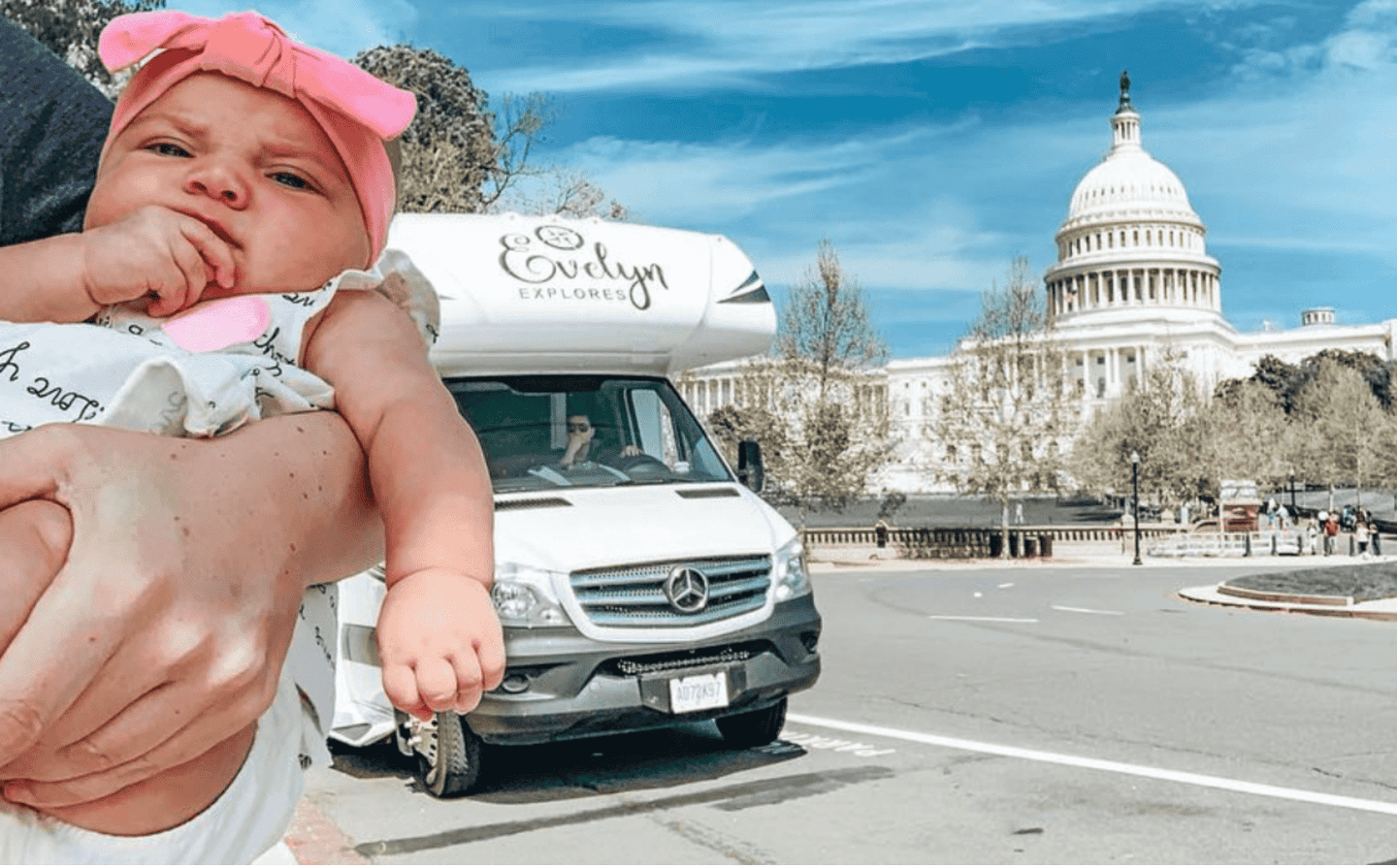 Road-tripping is, arguably, the best pastime for any adventurer—with nearly 3.8 million square miles of land to see in the United States alone, it's enough to keep even the most avid travelers entertained. While some have their dream route drawn up and are simply waiting to hit the highway and go, others make it a life goal to see as much as humanly possible. One California family falls into the latter category and, in the process, their five-month-old daughter is set to become the youngest person to ever visit all 50 American states.

Evelyn Woods is the baby in question here who's been traversing the U.S. of A with her parents, Jenna and Ryan, as well as their family dog, Bleu. They've done so in a Mercedes-Benz motorhome, which has served as their base for thousands upon thousands of miles during the journey.

The crew of four started from their home of Modesto, California and, as of June 14, only has one state left to cross off the list: fittingly, it's Alaska—the Final Frontier. They've been able to see the lower 48, as well as Hawaii, while spending at least one night in every state. Not too shabby for starting the long haul just a few months ago on March 17.

“We are so used to being entrepreneurs and making our own schedule,” said Jenna, who co-owns a pair of Californian distilleries with her husband Ryan, to Fox News. “So when I got pregnant, we started researching how to best spend my maternity leave and gain a little independence back and that’s when we got the idea for the 50-state challenge.”

Understandably, there've been plenty of challenges in making such a long drive with an infant as well as an eager-to-please puppy, not forgetting the couple had never driven an RV before purchasing the 24-foot Mercedes.

“It definitely has its challenges, but to get to watch Evelyn view the world with her own eyes is incredible,” Jenna added. "If she was a colicky baby, it would be much different."

From making memories and capturing them, like they did with Evelyn's first laugh on the Boston River Walk, the Woodses say they've come away from the trip with a few favorite destinations. “We loved Manhattan and Yellowstone,” said Jenna. West Virginia, however, gave them some fits when it came to GPS signal and general mishaps.

Now, the Woods family is looking to complete their journey on June 20, which would place Evelyn ahead of the current record-holder Harper Yeats, who managed the feat at six months old and helped inspire their trip.

You can follow Evelyn, Jenna, Ryan, and Blue's journey on their Instagram page as well as their blog which they set up for the round-country excursion.

Each state has its pluses and minuses.

Road Trips: This Is the Worst Part

Chevrolet’s poll of U.S. drivers found that the most stressful part about family road trips isn’t the kids.