"We never, ever, want to do this again," said the team. "It was horrible." 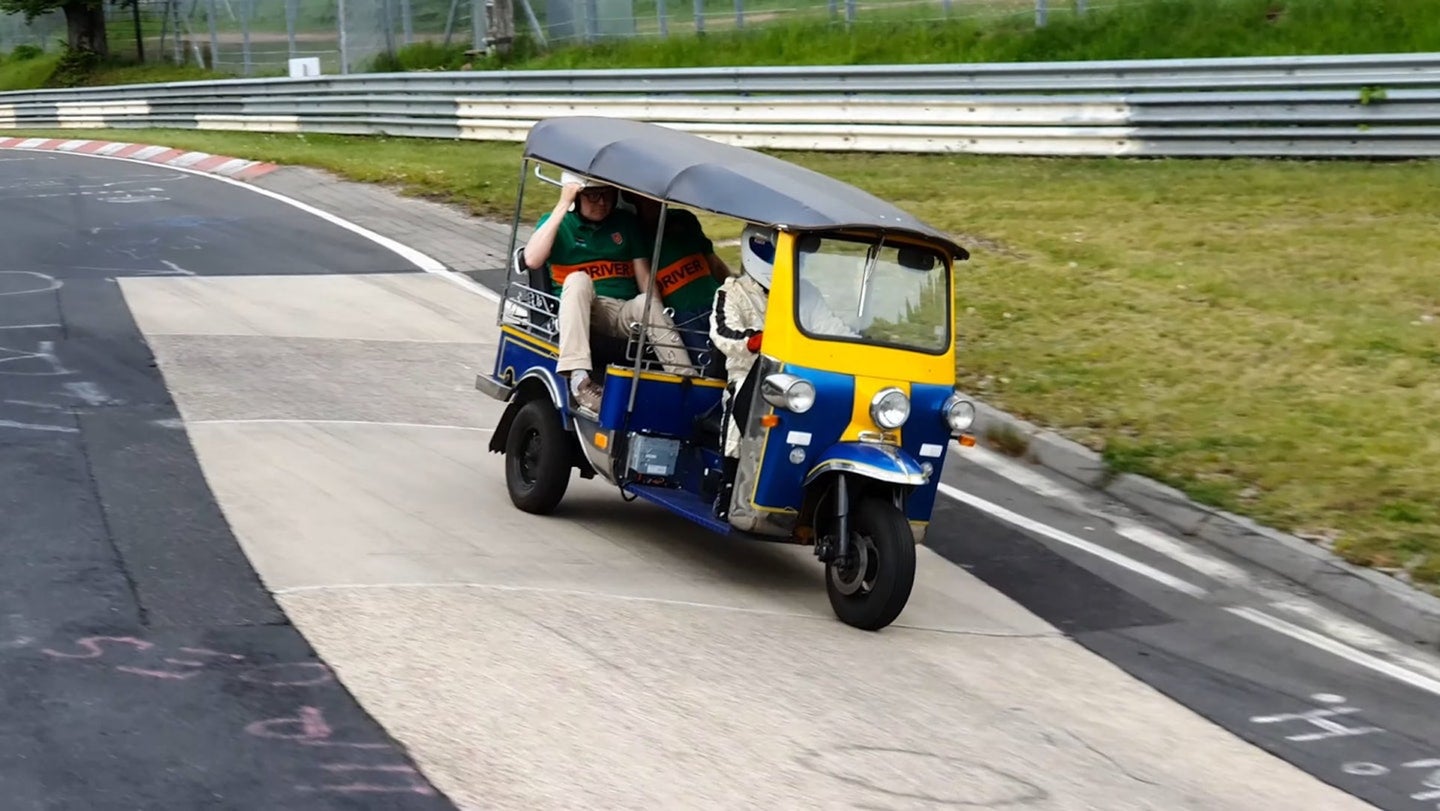 Three years of extraordinary effort and heartbreak finally resulted in an all-time record of 31:49.46 for three-wheeled tuk-tuks around the Nürburgring's grueling 12.9-mile Nordschleife course. In case you're not familiar with this particular vehicle, a tuk-tuk is a three-wheeled vehicle often used as a taxi in southeast Asia—and man, was this ever an incredible ride.

Björn Lagercrantz and Peter Ternström rode along on the record-setting tuk-tuk's back bench as an unnamed racing driver in Stig-like getup lapped the Nordschleife for over half an hour. While most 'Ring records only have a driver onboard, I have to appreciate their approach to tuk-tuk authenticity by setting this lap record with passengers.

This tuk-tuk was imported from Thailand over three years ago for this specific purpose, according to a post from the Granturismo Events team behind the lap.

Ternström, who answered the questions about the lap on r/cars, explained that they chose to run the tuk-tuk in part because no one had done a 'Ring lap record attempt with one before. Whatever time they would set would be the record.

This wasn't this tuk-tuk's first attempt to set a 'Ring lap record, either, as Nürburg-based YouTuber Misha Charoudin explained in his vlog of the weekend. The team tried to set a tuk-tuk lap record last year, but it broke down at the Hatzenbach section of the track. That's when the tuk-tuk's owners roped in the company that makes engine components for Koenigsegg to make newer, beefier forged pistons for the tuk-tuk, which helped it go the full length of the Nordschleife this year.

The tuk-tuk didn't have to contend with any traffic for this year's record attempt as the track had been rented out for a Granturismo Events track day and the organizers had set aside some time for the tuk-tuk lap. Nürburgring staff even verified their record time, according to the team.

Having the track to themselves didn't exactly make the lap feel any less sketchy, though, as the team explained:

Riding the tuk-tuk was a very scary experience. The little three-wheeler was flimsy and very unstable. Some corners were made on two wheels! We never, ever, want to do this again. It was horrible.

The panic when our racing driver went full retard downhill in the Fuchsröhre section will haunt us forever.

International acclaim was surely worth the moments of sheer terror, though. Congratulations, Lagercrantz, Ternström and the Stig's Thai Cousin!

That being said, because this is a 'Ring record posted to the Internet, we're going to have to demand a full onboard video now. That's just how this works.