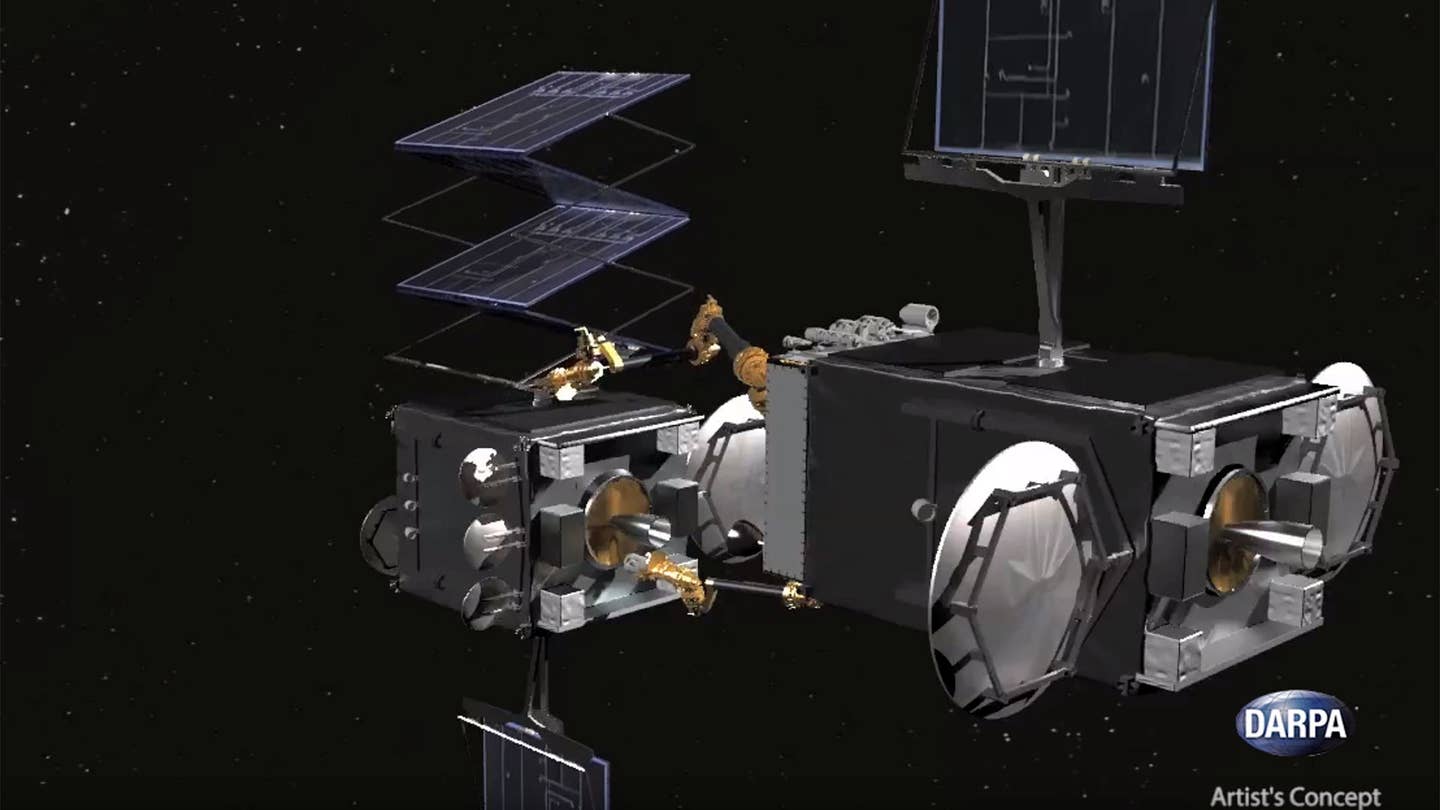 About 22,000 miles in space you’ll find hundreds of satellites on station above the Blue Marble. Most of them work. Many of them don’t – maybe they ran out of fuel after years of service, or got out of position, or something didn’t deploy correctly after launch so they never got a chance to work. The Defense Advanced Research Projects Agency (DARPA) wants to address this matter of billions of dollars in space junk by working with a commercial partner on a program called Robotic Servicing of Geosynchronous Satellites (RGS) – essentially an outer space multi-tool kit controlled by ground personnel that could repair, reprogram, restock, refuel, and reposition our errant mechanical moons, even ones not originally designed to be fixed.

DARPA’s contribution is the centerpiece of the system, the Front-end Robotics Enabling Near-term Demonstration (FREND) robotic arm. In the works for more than six years, FREND is a two-meter-long, multi-segment arm that can carry a 22-pound payload, grip a satellite not configured for docking, deploy numerous implements, and has an accuracy of ±1 millimeter. For RGS, the agency is upgrading FREND with new sensors for high-fidelity spatial orientation, machine vision, and autonomous operation.

The FREND arm would be attached to a servicing vehicle created by a commercial entity. That private company would also develop the satellite to launch the whole module – expected to stay in space for years – and manage the repair on behalf of a paying client, while DARPA would pay for launches. After receiving a fix request, the mechanic-bot would fly to the broken satellite and examine it so the mission controllers can configure and practice a fix on the ground, then apply the fix 22,000 miles in space.

Having access to a flying Pep Boys would dramatically alter the designs, longevity, and expense of satellite operations. DARPA will make its open call for commercial partners soon, with an eye on RGS operational readiness within five years.

NASA is doing exactly the same thing with its Restore-L craft that uses an evolution of the FREND arm. The space agency’s 22-year-old Satellite Servicing Capabilities Office is focused right now on its various space exploration systems, but has been considering commercial partners since at least 2013 and plans to launch in 2019. With both government agencies in the game, you might be able to get an estimate from NASA for your satellite fix, then head over to DARPA for a second opinion – and a lower price.

Write Your Name Using Satellite Images of Streets and Warehouses