Few things can still inspire wonder, reverence, and awe in today’s populace. We’re deeply cynical animals, especially when staring down the current threats we face as a species. However, if there’s one industry that can still make us all stop, hold our collective breaths, and cheer when it's successful, it’s the space industry. Promoting those reactions, Jeff Bezos’ Blue Origin space venture dropped audience's jaws when it previewed the company’s New Glenn rocket, lunar lander, lunar rover, and plans for space travel in the very near future.

The presentation had been shrouded in secrecy for weeks as the company released a few teasers via its social media channels. The payoff was much greater than anyone expected. Most believed that Blue Origin would give more details on its new rocket capable of reaching the Moon. And in fact, it did that. The conference released further details about the New Glenn, which according to the infographic displayed during the press conference, is slightly smaller than a Saturn V. It’s also in stark contrast to Blue Origin’s much smaller New Shepard rocket, which is scheduled for its first human tests later this year. Both the New Shepard and New Glenn rockets—like SpaceX’s own—have been designed to be reusable to ensure that space travel costs are brought back down to Earth. Forgive us for the pun.

New Glenn’s first stage rocket has been designed to be reused up to 25 times. It’s often forgotten, but Blue Origin demonstrated that a rocket could be reused before SpaceX. Blue Origin is serious about space. New Glenn delivers 3.9 million pounds of thrust from its rocket and will feature a refueling cost of less than $1 million. Yet, while the company’s New Glenn rocket is worthy of its own press conference, Bezos had a far more interesting piece of the space puzzle to debut: a lunar lander.

Taking up most of the stage, the mockup of the lunar lander—dubbed Blue Moon—has been carefully designed in secret for the past three years. It was known that Blue Origins had lunar ambitions—it was recently reported that it had paid NASA $50,000 for detailed plans for previous lunar landers, as well as NASA’s observations and technical knowledge gained since those first missions. Yet, given that recent addition, many in the space field assumed that the company was still years away from showing off a concept or semi-functional prototype. That’s obviously not the case, as while on stage, Bezos announced that Blue Origin would begin testing Blue Moon’s BE-7 landing rockets this summer.

According to the presentation, Blue Moon is powered by liquid hydrogen fuel cells—similar to those found in Toyota’s Mirai—while the rocket is a liquid hydrogen/liquid oxygen hybrid engine. The liquid hydrogen fuel cells were designed to not only be more easily and cheaply refueled here on Earth but be refueled by lunar ice when refinement can be conducted on the Moon’s surface. Blue Moon features a large enough interior compartment for up to four rovers, which can be deployed simultaneously, as well as a larger rover attached to its roof. It can also accommodate a payload between 3.6 and 6.5 metric tons, as well as enough room for astronauts and research equipment as the true goal of Blue Moon is to return humans to the Moon.

Additionally, Blue Moon’s exterior can be configured for differing missions, including a squat design or a more stretched look. Blue Moon will also feature a gigabit bandwidth communication system for faster Earth-to-Lunar messages. Lastly, the lunar lander will have an ascent stage which is designed to transport specimens and astronauts to and from the lunar surface. Though a rover took to the stage and sat next to Blue Moon, it didn’t get much of the attention, nor were details released about its capability or if Blue Origins developed it in house.

We’ve been following other recent developments in space travel, but there hasn’t been a real moonshot for some time, other than a few rovers in the last few years. Blue Origin’s ambitions are the first to have us truly excited. The company has also taken a much more cautious approach versus SpaceX’s more theatrical debuts, which lends itself to the seriousness of those ambitions.

Ahead of the presentation, Blue Origin played a short clip with interlaid communication from the Apollo missions cut to a video of concept art. Bezos took the time after it played to tell the crow, “If that doesn't inspire you, you are at the wrong event.” We concur. 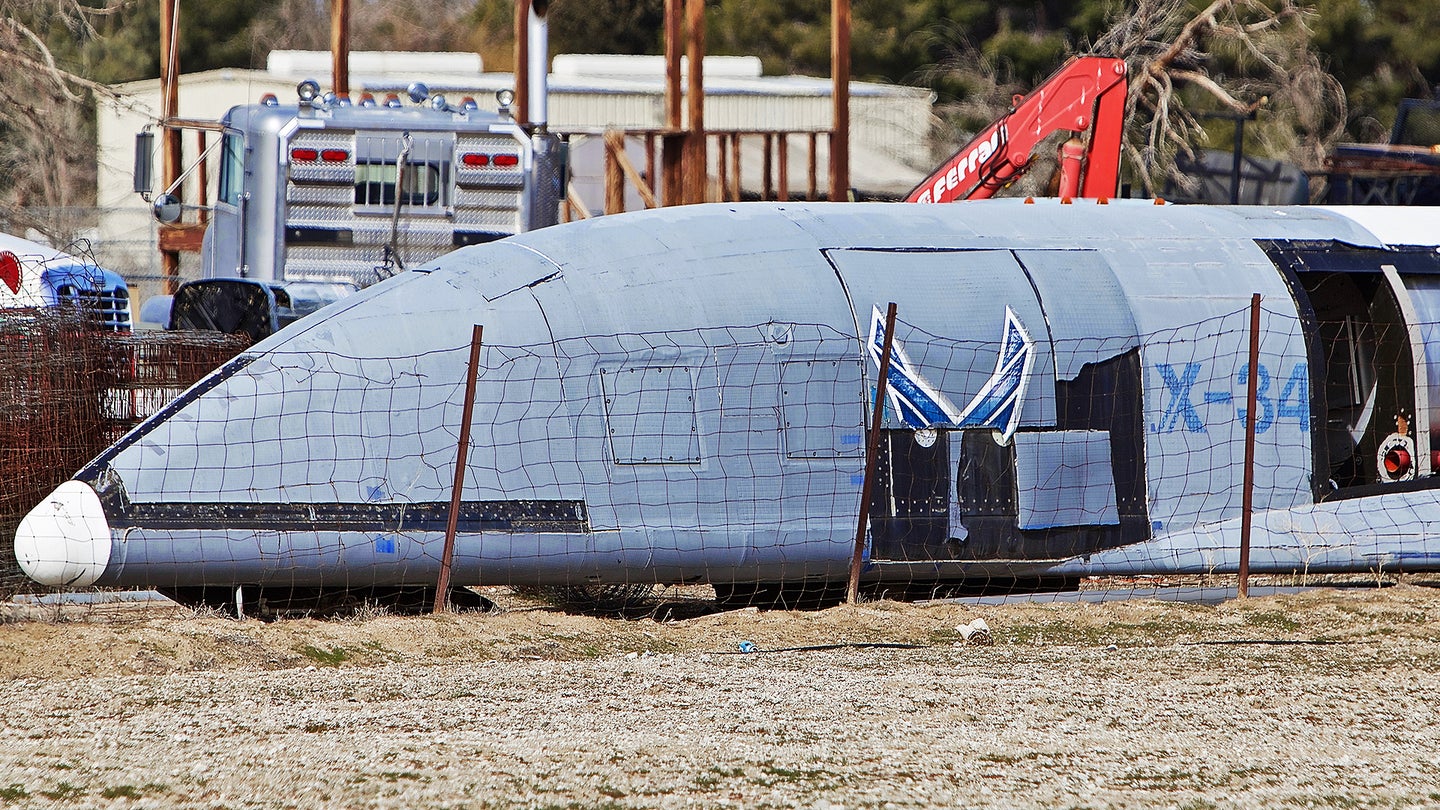 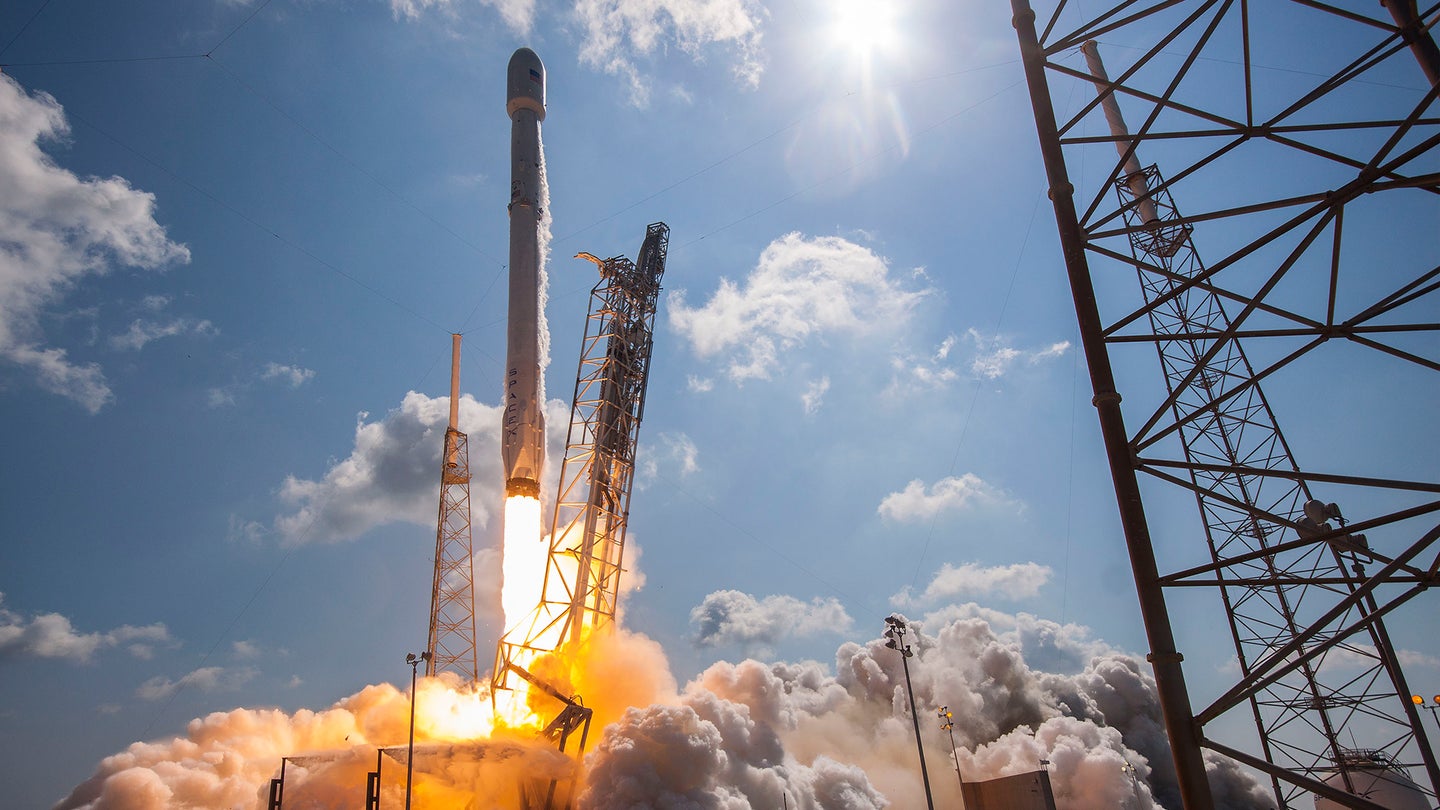 A 3,523-pound payload of supplies will be sent to the ISS on SpaceX’s Dragon spacecraft, which is making its second launch in just 48 hours. 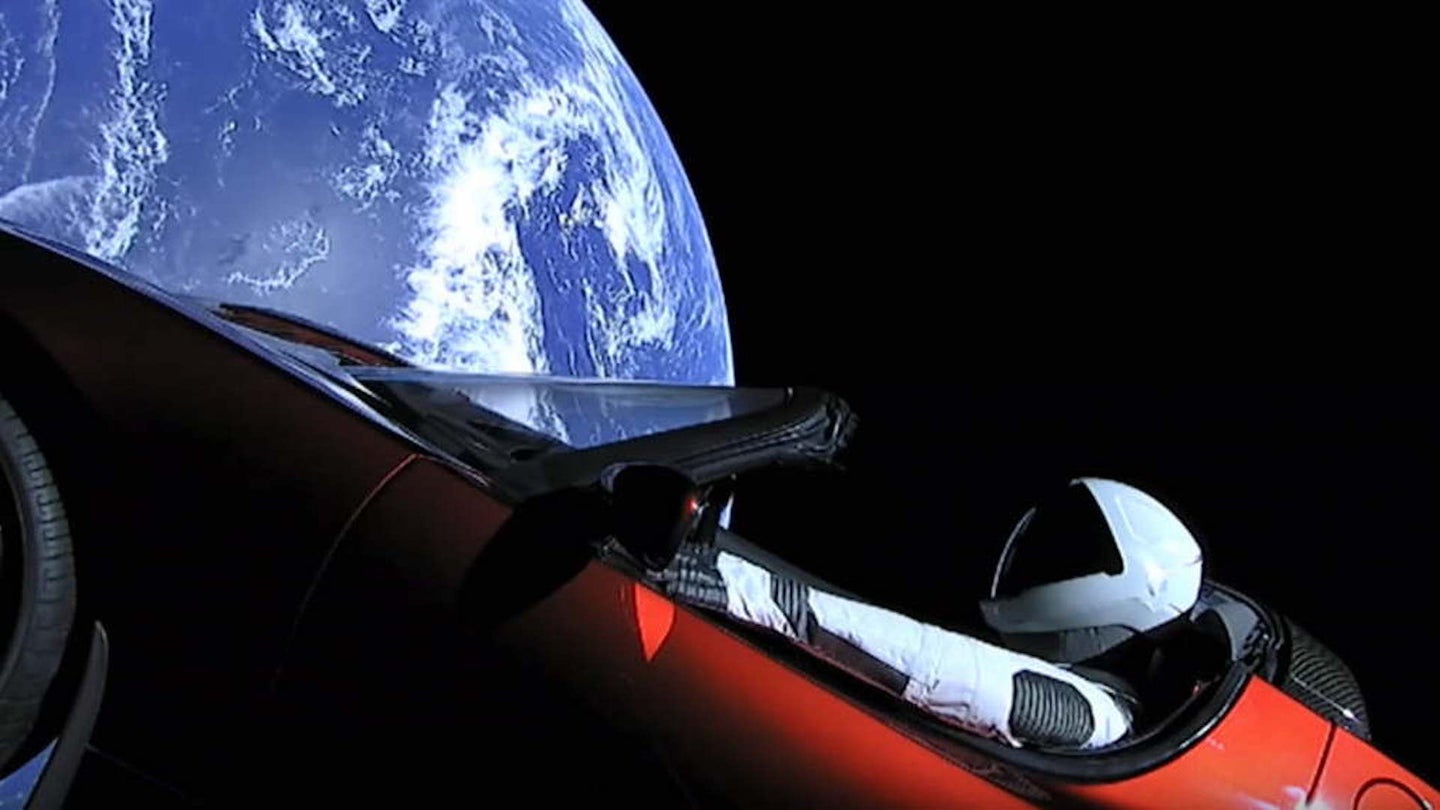 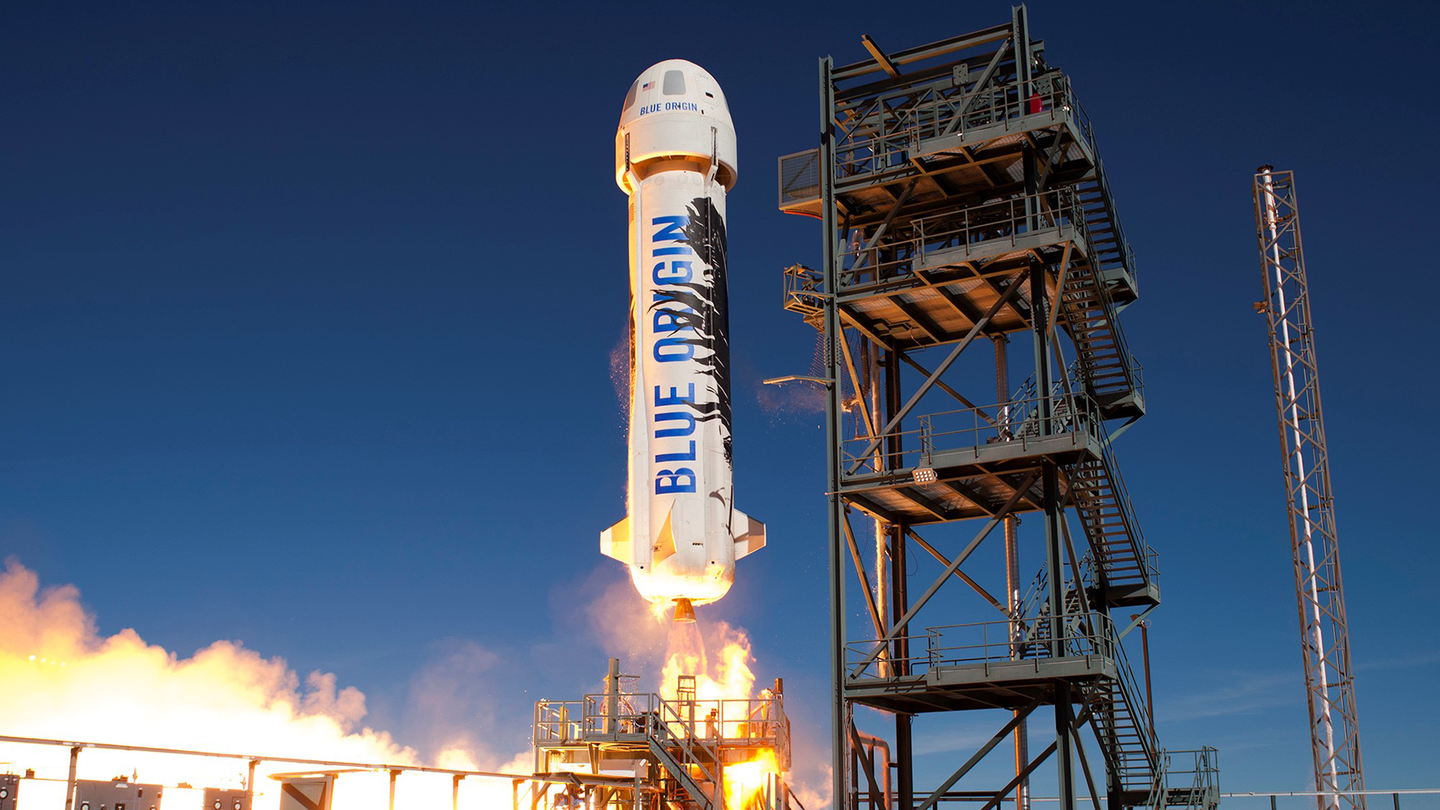 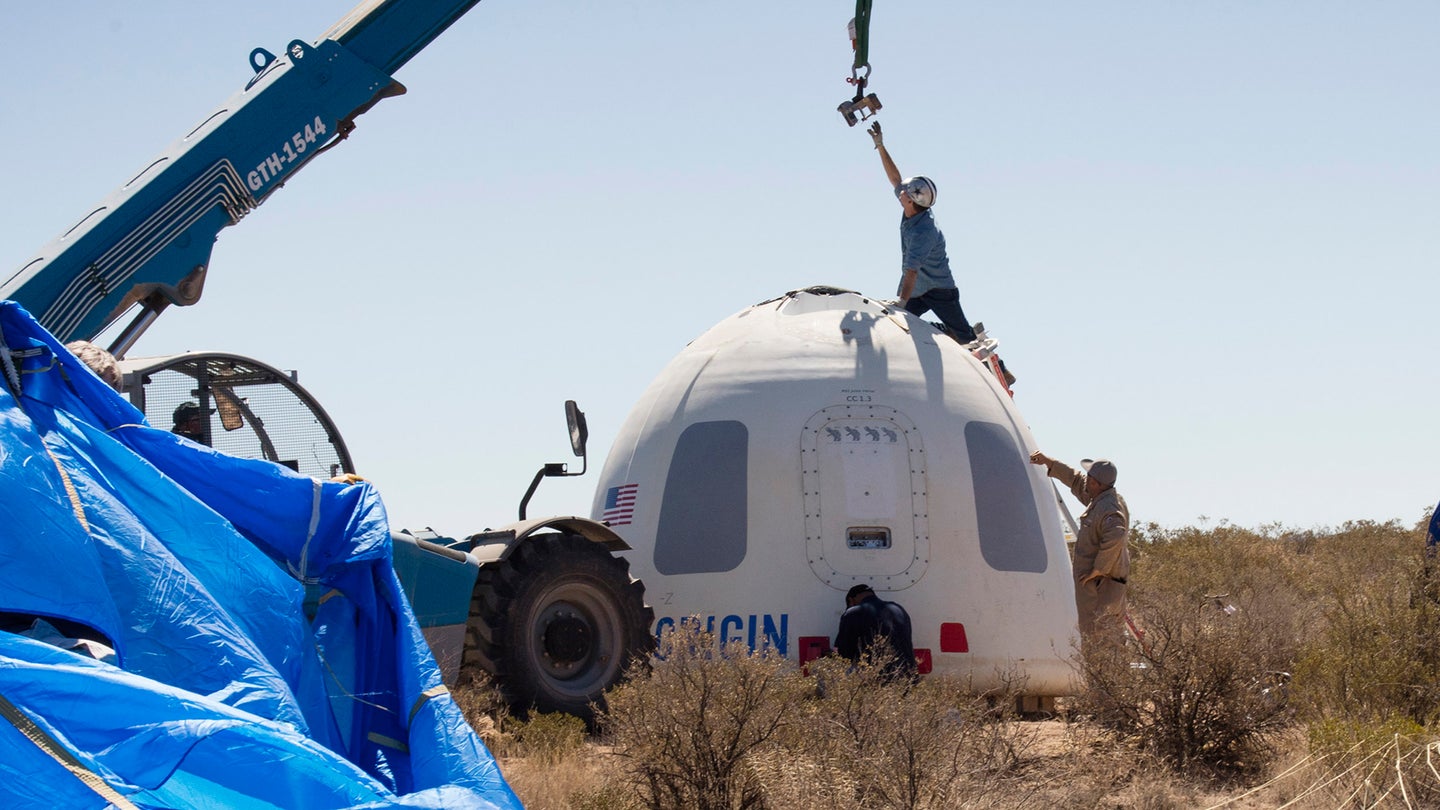