Concerned citizens armed with a large board and Alberta's loudest Hawaiian shirt held the arsonist down until police arrived on the scene. 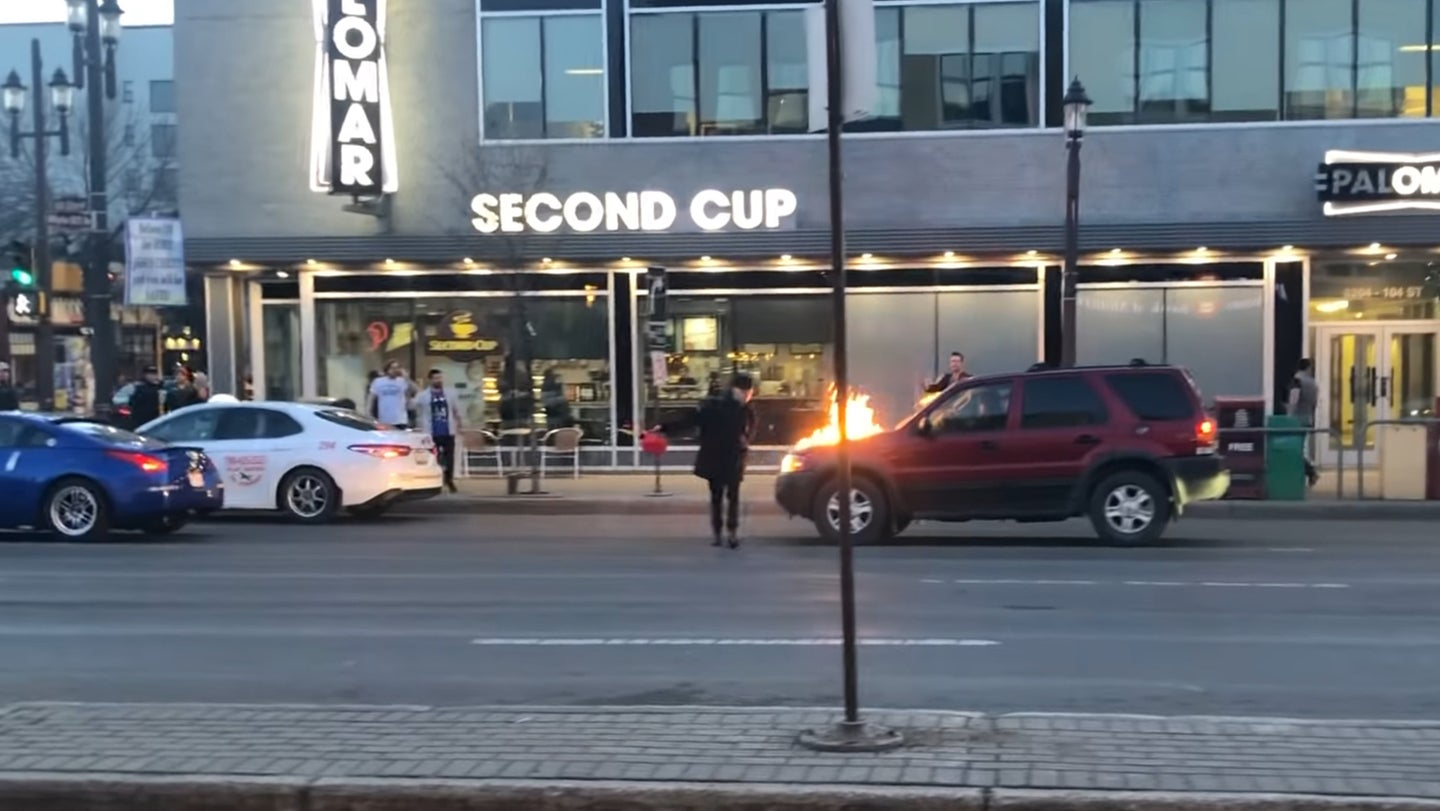 An arsonist in Edmonton, Alberta, seemed pretty proud of his quick work setting 13 cars on fire until a pair of heroes chased him down and tackled him right down to the floor in the middle of a nearby Starbucks. Meet your new heroes: two men the Internet has dubbed "Hawaiian Shirt Guy" and "2x4 Guy."

The bizarre string of arsons happened near Whyte Avenue and 104 Street in Edmonton on the evening of April 12, reports the Edmonton Journal. Videos show the man throwing gasoline from a jerry can onto vehicles he passes and lighting them on fire, targeting parked cars as well as a Ford Escape which occupants inside of it.

[Fair warning: Canadians drop the stereotypical politeness in these videos, so you'll want to pop headphones on if you're at work.]

Jessica Venne, who was driving the Escape at the time, described the terror of seeing her running car set ablaze to the Edmonton Journal:

I noticed on my right there was a ton of smoke and I kind of very, very briefly saw flames on the sidewalk and that was all I could see. Then there was a man standing on the sidewalk with a jerry can in his hand and there was a bunch of people around him with their arms up trying to calm him down and before I knew what was happening he turned around.

Inside me I went, "No, don’t you dare," and he poured gasoline all over my hood and lit it instantly.

Venne and her passenger ultimately extinguished the flames by driving around the corner onto Whyte Avenue to catch more wind, parking, and then dousing what was left with water.

"I basically fell to my knees and had a little cry because I was just in shock,” she told the Edmonton Journal. “It was very scary to be in my vehicle with my hood on fire.”

Fortunately, the damage to her Escape was just cosmetic, although the parked cars that were set on fire weren't as lucky, suffering damage to the front and rear wheels. Vice notes that another person appears to have been following the arsonist and putting out the fires with a fire extinguisher.

A video taken by Redditor spincrisis shows the end of the man's fire-setting spree, starting with that moving but lightly flambéd Escape. The man, seemingly proud of his work, flings his presumably empty gas can in the air and shrugs off his backpack onto the street.

That's when two men who witnessed the arson took chase: one wearing a bright red Hawaiian shirt followed by Jeff Halaby, who was carrying a section of baseboard. The men were deemed "Hawaiian Shirt Guy" and "2x4 Guy" by internet fans accordingly.

Halabay's baseboard wasn't really a 2x4—it was just what was handy when he saw cars getting set on fire along the busy street. An employee at Halaby's new restaurant Spotlight Cabaret alerted him of the man setting cars on fire, and that's when he sprung into action.

"I was so scared that one of those cars was going to explode because it was right in front of the restaurants across the street," Halaby told the Edmonton Journal.

Spotlight Cabaret had been recently renovated so, fortunately, this meant that Halaby found a wide section of baseboard to grab when he ran down the stairs to chase the arsonist down.

"I thought, well I can’t go out there without anything in my hand,” he told the Edmonton Journal. “I found a four-foot piece of baseboard and thought well, this is better than nothing. I ran across the street to cut him off because I didn’t want him to continue walking closer to Whyte Avenue."

The suspect, 22-year-old Malice Sutton, not only has a bizarrely appropriate name, but was charged with eleven counts of arson to the property of others (damage), three counts of arson to property (disregard for human life), four counts of possession of an incendiary material, and assault with a weapon, per the Edmonton Police Service. No citizens were ultimately harmed by the blazing cars.

Meanwhile, Halaby doesn't see himself as a hero—he just did what he had to do.

"I don’t feel like I was any kind of hero, Halaby said to the Edmonton Journal. "I feel like there was a lot of people on Whyte Avenue yesterday who had the same instinct that I did. I just kept thinking this guy can blow up a car. That’s all that was in my head."