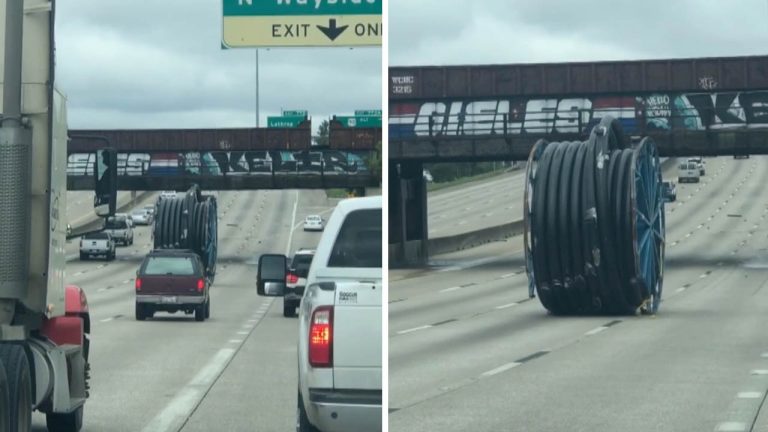 Motorists in Houston traveling on Interstate 10 encountered a bizarre roadblock Wednesday during their commute. A giant spool of steel cable fell off of an open semi tractor trailer and rolled slowly down the highway before coming to a stop.

One motorist, Dennis Lewis, was en route to his daughter's soccer game when he noticed traffic slowing ahead. He managed to record the giant wire spool rolling and eventually slowing to a stop.

It's the second time in two weeks that an unsecured load has caused trouble for motorists. Last week a trucker in Seattle unwittingly let loose a torrent of metal balls that wreaked havoc on a a steep downhill suburban street.

Thankfully, nobody was injured in either incident, and despite happening on a highway with much faster average speeds, no accidents were caused by the rolling spool of wire. In Houston, however, some cars may have been damaged by debris.

While two incidents hardly represent a trend, it does draw attention to the importance of properly securing loads. While it's rarely the drivers themselves that load the trailers, they are held responsible by law enforcement if they are seen driving with an improperly secured load. After incidents like the ones in Houston and Seattle, we can understand why that's so strictly enforced.

Motorists who spot a potential problem can help by calling the state highway patrol in their area if it's safe to do so. While a ticket may sour a trucker's day, it can keep things from getting a whole lot worse for both the trucker and their fellow motorists.