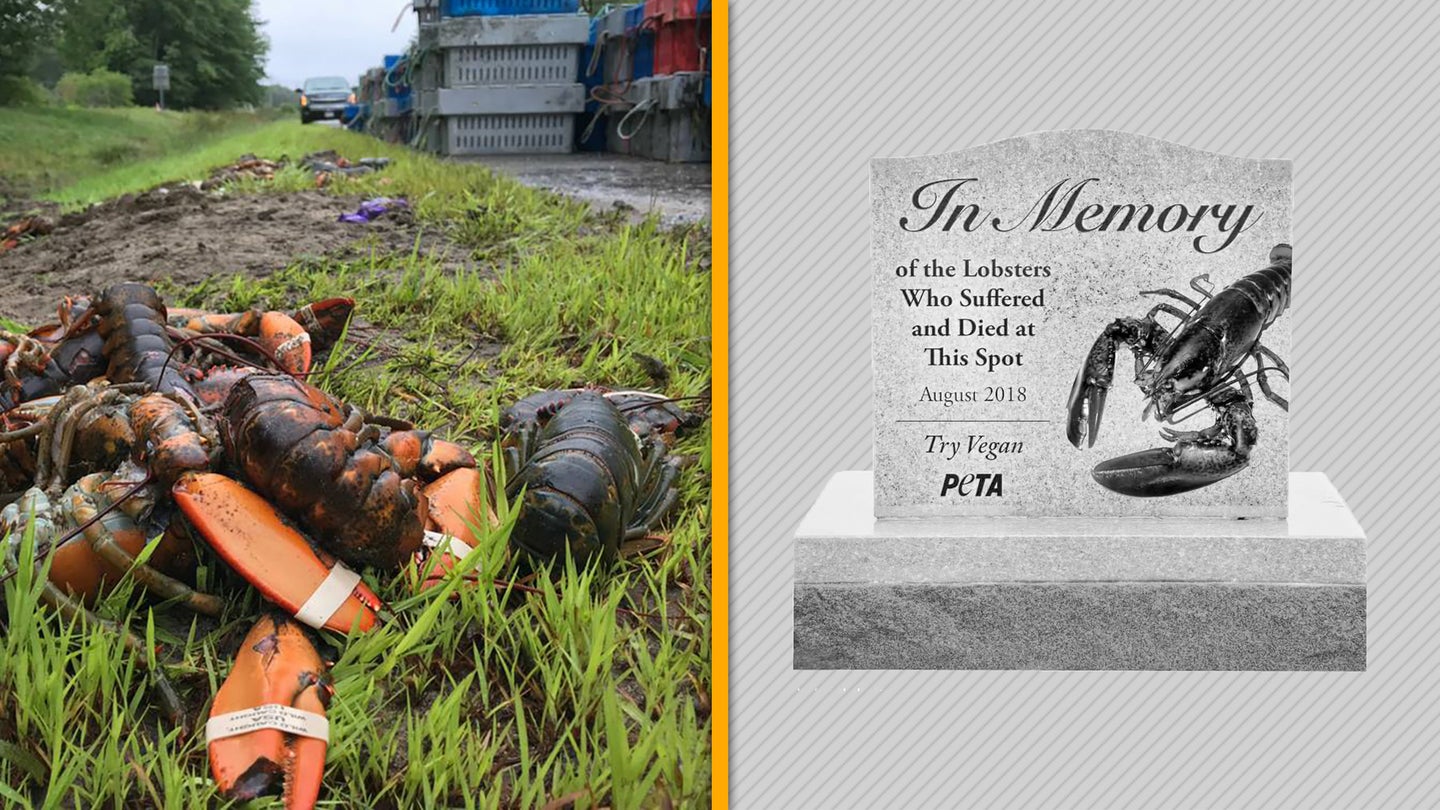 PETA, that infamous vanguard of animals large and small, wants the people of Maine to forever know just who died along a nondescript stretch of Route 1 outside the town of Brunswick last month: a bunch of lobsters, their carapaces crushed when a seafood distributor truck rolled over and spilled its delicious cargo of thousands of crustaceans onto the roadway. The group recently applied to build a five-foot-tall roadside memorial to the deceased, and as you might guess, Mainers aren't totally on board.

In late August, live lobsters joined the ever-expanding list of weird highway spills when a box truck carrying 7,000 pounds of soon-to-be sweet meat drifted off the shoulder of Route 1, rolled over, and launched its cargo all over the road. Some of the lobsters were killed outright in the crash, but authorities had to dispose of the entire shipment because the animals went too long without being properly cooled.

WGME News reports that when People for the Ethical Treatment of Animals caught wind of the tragedy, it announced it was applying for a permit to install a five-foot tombstone at the site of the accident with a picture of a lobster and the words "In Memory of the lobsters who suffered and died at this spot, August 2018. Try Vegan."

"Countless sensitive crustaceans experienced an agonizing death when this truck rolled over and their bodies came crashing down onto the highway," PETA Executive Vice President Tracy Reiman said in a statement. "PETA hopes to pay tribute to these individuals who didn't want to die with a memorial urging people to help prevent future suffering by keeping lobsters and all other animals off their plates."

As you might guess, it's going to take more than a tall rock to stop the people of Maine from eating lobster. Comments on the WGME Facebook page range from logical (Seriously though weren't the lobsters all headed to a pot anyway??) to philosophical (I think a memorial bench at any Lobster eatery to sit and ponder whether butter or mayo makes the best lobster roll would be more appropriate) to the downright Downeast (hauled up a trap yesterday n there was 10 15 lobsters in it an a great big hard shell female b 4 cud get it out of the trap it pinched a smaller male lobster almost cutting it's tail off pretty sure it's gonna die so should there b a floating memorial in that spot for that lobster? good question for the tree huggers).

All were united in their common belief that this is a waste of time, money, and effort. Fortunately, the unlucky bureaucrat at the Maine Department of Transportation who drew the short straw and had to respond to the group's application turned it down last week over various safety concerns.

PETA is said to be looking for other ways "to reach the people of Maine," according to CNN. Maybe consider something other than the lobster.