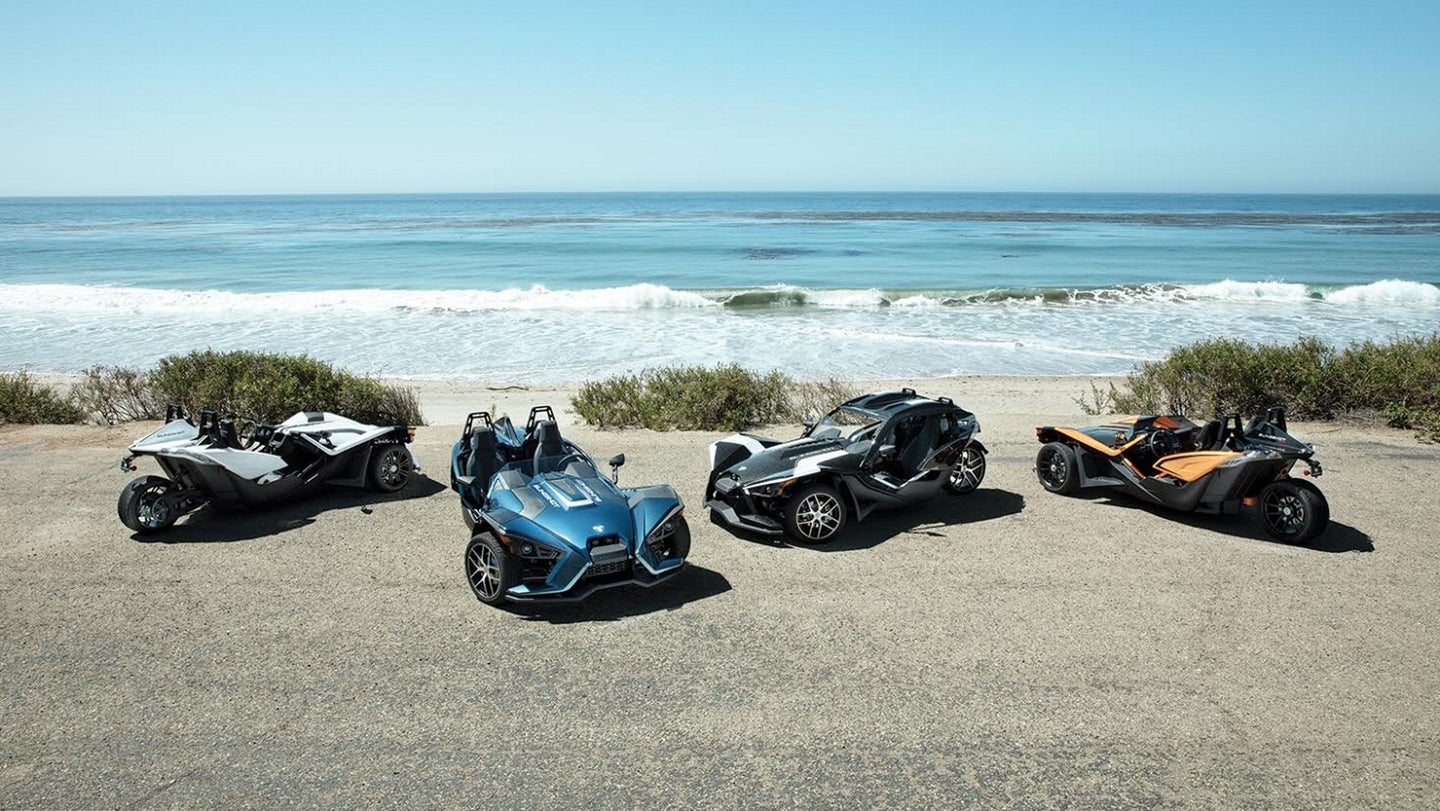 Polaris is bringing a little more cohesion to the Slingshot lineup for 2019. It has done away with the confusing “LE” moniker that it added to the end of a couple of its trims and instead has four clear, easy to understand models in the Slingshot family.

Mechanically, all 2019 Slingshots are unchanged and powered by a GM 2.4-liter Ecotec-derived engine making 173 horsepower and 166 pound-feet of torque with the only transmission option being a five-speed manual.

“Since its ground-breaking introduction in 2014, the desire for a one-of-a-kind joyride has been answered by the three-wheeled, open-air experience of Slingshot,” said Josh Fulkerson, Slingshot senior director, in a press release. “The new 2019 lineup continues to deliver a high fun-factor while elevating the overall product experience.”

It begins with the entry-level Slingshot S which starts at $19,999. For the first time, the base model is available in a striking white paint job which gives it a nice contrast over the previous all-black Slingshot S. Standard features are a little light and this is the only Slingshot that doesn’t come standard with the excellent Ride Command infotainment system, but it’s a pretty affordable way to get into the open-air fun.

If you upgrade to the mid-range Slingshot SL, which starts at $25,499, you get the added niceties of Ride Command, 100-watt Rockford Fosgate premium audio, a backup camera, a windshield, bigger, nicer-looking wheels, and premium paint. The paint options for the 2019 Slingshot SL are black and a lovely Orion Blue which kind of reminds us of the Blue Denim paint on Harley-Davidson’s 115th-anniversary models.

For peak Slingshot performance, you can upgrade to the Slingshot SLR which starts at $28,999. While there are no upgrades to the engine, this is decidedly the sportiest Slingshot with a wider rear tire, two-piece composite brake rotors, more aggressively bolstered seats, and Sparco steering wheel, shift knob, and pedal covers. It also comes with a tinted windshield, Ride Command with navigation, and a pair of wild two-tone paint jobs that Polaris calls Afterburner Orange and Red Pearl. These paint jobs are great if you’re concerned about your Slingshot not standing out enough in traffic.

About halfway through the previous model year, the luxurious Grand Touring LE model was added to the Slingshot range. This year, it’s just the Slingshot Grand Touring and it starts at $29,499. As its name implies, this Slingshot is intended for long-distance touring with Ride Command with navigation, a taller windshield, quilted comfort seats, and most notably, this is the only Slingshot that comes standard with the popular Slingshade removable roof option. That makes the Slingshot a lot more versatile and comfortable when the weather gets nasty. The only paint option is two-tone black and white.

Notably absent this year is the Slingshot SLR LE which was the craziest of them all. It had everything the SLR had plus the addition of Bilstein 10-way adjustable suspension, 200-watt Rockford Fosgate audio, and a crazy gray and lime green two-tone paint job. 2018 was the only model year for the SLR LE and it was the most expensive with a starting price of $30,999. Don’t worry, you can still spec a Slingshot SLR with the good Bilstein suspension and the louder stereo if you want.

From affordable to luxurious to sporty, the 2019 Slingshot lineup has something for everyone who could want a three-wheel roadster.