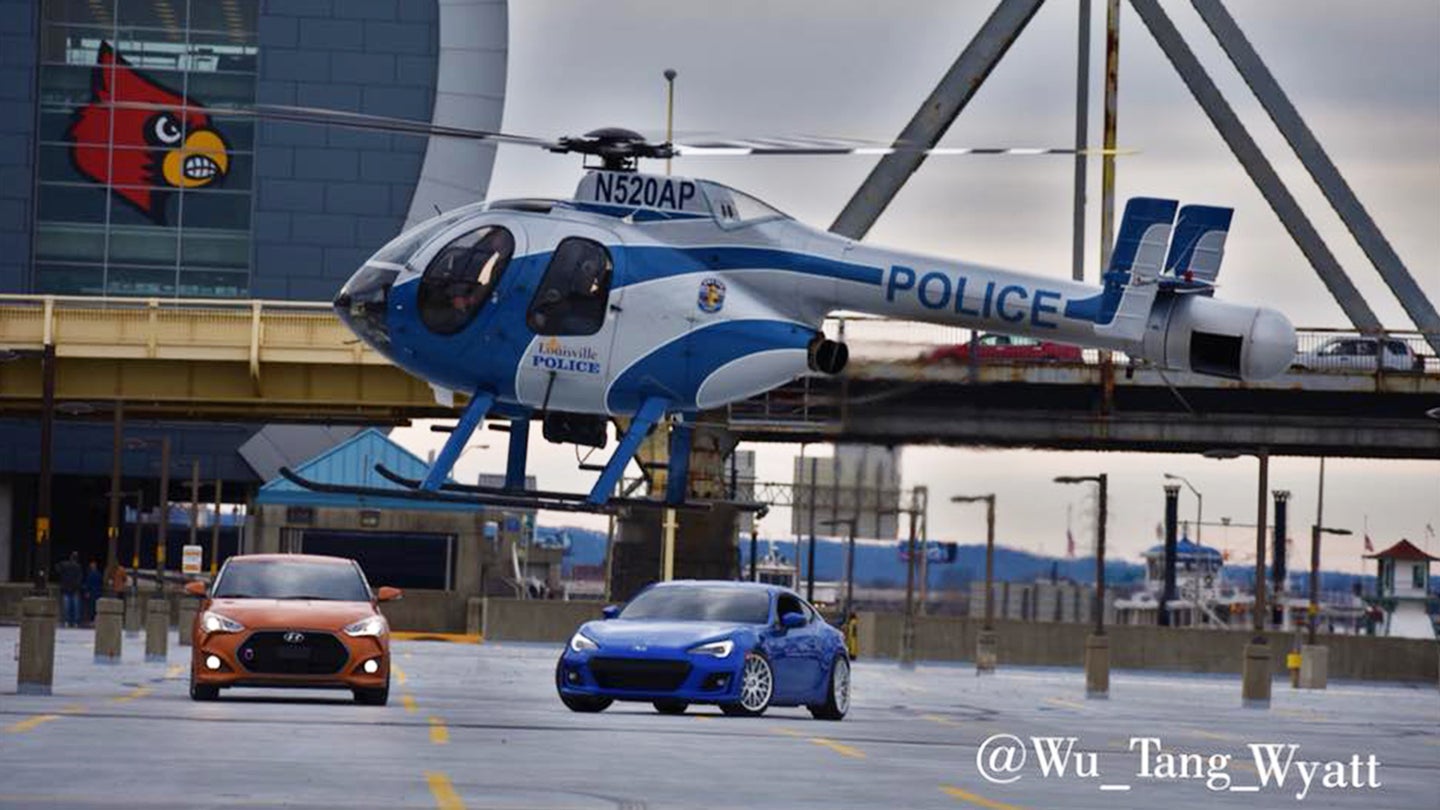 Over the past week, millions of Americans have been pulled over by the police. But only one of them was stopped by a police helicopter—an aerial unit randomly confronting an individual driver—and he shared his incredible story with The Drive.

Kentucky resident Zack Bell wasn't looking for anything but a view of the floodwaters in downtown Louisville on Sunday when he drove his Subaru BRZ up to the roof of an empty parking garage next to the arena for the University of Louisville basketball teams. Unfortunately, that's not how the crew of a police helicopter circling above saw it.

Bell told The Drive he was on the roof for less than five minutes, talking with the owner of the Hyundai Veloster seen in the image up top, when suddenly he noticed a small helicopter rapidly descending toward him. He watched in amazement for a few moments and tried to record the scene on his phone, but the wind from rotors was so severe that he had to duck into his car as it landed about 20 feet in front of him.

"When I got in my car, the officer jumped out and told me not to move, so I stayed there and rolled my window down. That’s when he walked up and accused me of doing donuts and burnouts on the parking lot," Bell said.

The officer was referring to a series of old tire marks visible nearby. Bell immediately began defending himself, telling the skeptical cop to check every camera in the vicinity to prove he had just arrived, and that he couldn't possibly be the guilty party. In a defense that matched the ridiculousness of the situation, he even asked the officer, "Why would I do that in the daytime?"

After the officer realized he was mistaken, Bell said he simply gave back his driver's license, got in the helicopter, and "flew away." Bell stood on the roof, wondering if that all really just happened. That's when he got his second surprise of the afternoon: An amateur photographer named Wyatt Keys, who also happened to be there to see the floodwaters, walked up to him and showed him an amazing shot he captured of the helicopter taking off in front of the cars.

"I really thought it was jut a news heli taking video of all the flooded water. Then it started to get lower and turn toward the building, then just landed like it was nothing," Keys told The Drive.

We called the Louisville Police Department to see if this kind of aerial traffic stop is department policy, and a public information officer confirmed that helicopter crews are allowed to land and confront drivers or suspects at their discretion, though he called it a "rarity." He also laughed when we mentioned Bell's case and said the story was already well-known internally.

In a sign that there aren't any hard feelings on either side, the police department's Facebook page shared Keys's photo and the post where Bell originally told his story. That makes this closing detail all the more ironic.

"Before the cop walked away, I asked if I can take one photo of my car beside the helicopter, and he said no," Bell said.