The Many Cars We’re Most Thankful For 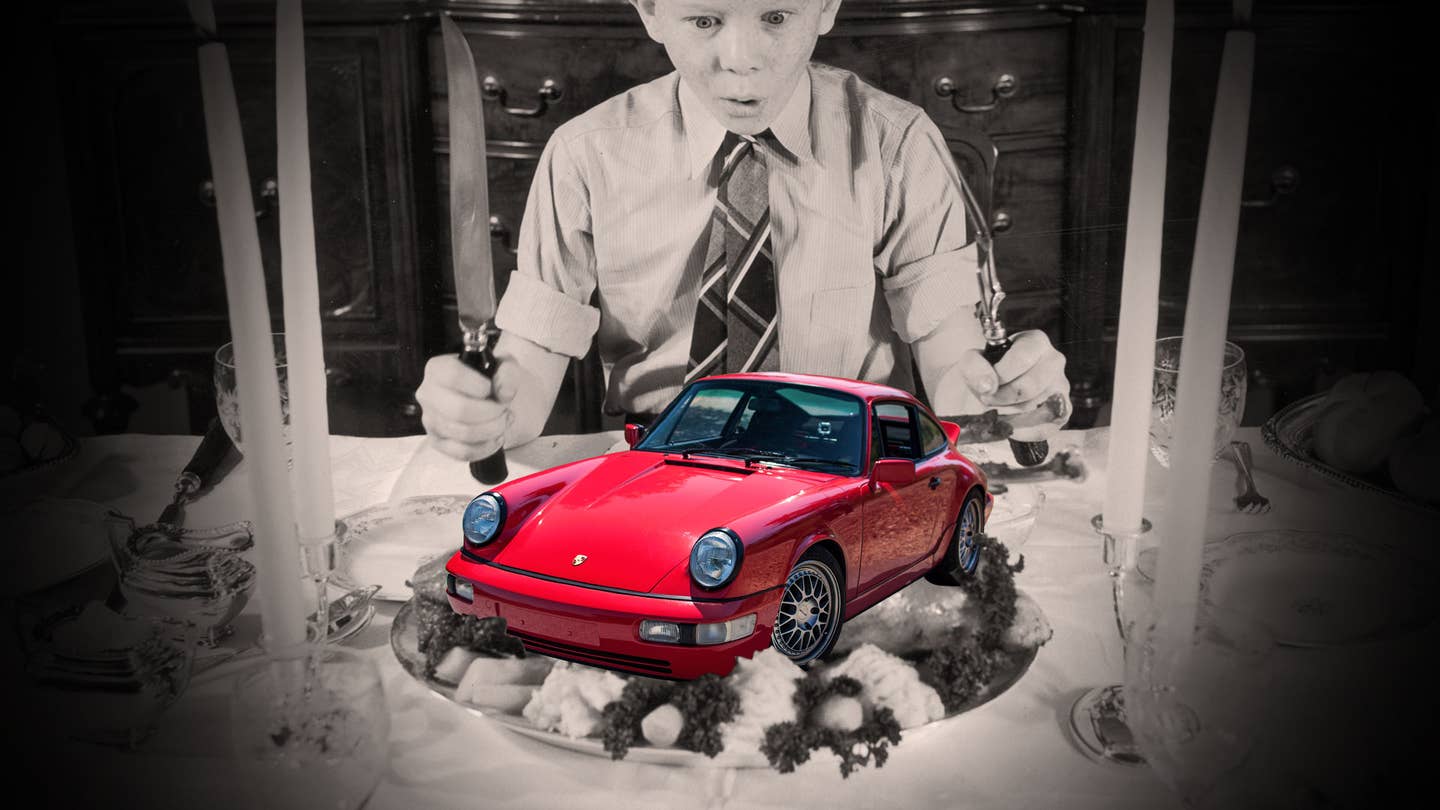 Sure, we're thankful for the health of our family members, for better angels of our nature, for the general welfare of the world, for the entire pumpkin pie we're about to eat while slowly falling asleep on our living room floor.

But really we're thankful that there are so many goddamn great cars out there, passing over showroom floors, zipping along suburban streets, screeching down the corkscrew at Laguna Seca, or nailing the kink at Road America. It's been a tough year—certainly the toughest yet for all you Gen-Z types out there—so to brighten your feast weekend, our staff gathered 'round and listed the cars they're most thankful right now.

To most car fans, a Ferrari or even Porsche is like Thanksgiving dinner in a fantasy lifestyle magazine: It looks gorgeous, but it’s too complicated, too expensive, and you know you’ll never enjoy a bite. The Volkswagen GTI and its AWD side dish, the Golf R, are for true automotive pilgrims, a perennial gift of hot-hatch design and performance that’s affordable enough to be shared with all. Just $26,415 gets you in the GTI’s door with a 220-horsepower turbo four, seasonally friendly tartan-plaid seats and the buttery six-speed manual transmission for which we give thanks. The Golf R is richer at $40,195, but it might as well wear an Audi badge, with 292 frisky ponies and all-weather traction that’s guaranteed to get you to grandma’s on time.

This selection feels like a filthy confession. I drove 100 different cars this year—the rare, the pricey, the perfectly maintained vintage—and could have chosen the Porsche Cayman GT4 or the Ferrari GTC4 Lusso, both of which gave me pleasure chills. Or Ford Focus RS, the sweetest hatch I've ever driven.

But I have two daughters now that require trundling about. So when I spent a week in the new Kia Sedona, I suddenly cast aside a lifelong disdain for people-moving minivans and discovered a car that exceeded all expectations for family comfort, style, a touch of performance and overall pleasingness. Sure, the Sedona is a minivan, but it's lower and less boxy than any of the others and it steers with something like a performance feel. The interior has two ridiculously well-articulated and reclining middle-row captain chairs and an exceptionally well-crafted cockpit. I was stunned. I'm a changed man. A Kia!

Listen, it's not going to get me anyway faster, and if I go sideways both of my kids will vomit all over the place, but I'm thankful for the fact that the Sedona makes me not miss the GT4 or the Focus RS too, too much.

The Model S is the car that launched a thousand blogs. It’s hard to imagine any vehicle more hotly debated than the Model S. Love it or hate it….despite all its flaws and faults…it’s the most fascinating car of our time. For writers, it's a never-ending source of news, and for some reason readers find an updated battery design interesting and worthy of 500 words.

Back in 2011, the Scion FR-S, née Toyota GT86, aka Subaru BRZ, came joyously ass-shaking into a world made both porcine, by generations of rising SUV sales, and mercenarily power-focused thanks to the ongoing muscle car horsepower wars. At the time, the Toyobaru was genuinely shocking—an all-new and affordable two-seat, three-pedal RWD sports car that made no effort towards boastful top speed or acceleration or lateral-g figures, focusing instead on things like balance and feedback and feel. It was a simple love-letter to driving enthusiasts, and it seemed to suggest the automotive landscape was changing.

It was not to be. Five years later, the Bavarians are now making their own over-motored pony cars, the apex predator of the ascendant SUV category costs over $200,000, and the only "new" entry in the pure sports car category is a rebadged Miata. Sure, the FR-S/BRZ was hardly blameless in its inability to set the world on fire: the interior felt needlessly chintzy; the shifter moved with the grace of a slot machine lever, and the engine was not only charmless but actively annoying. And yet, there’s something about the fact that a pair of major manufacturers committed to a low-volume loss leader, just to make the world a more fun place.

There are low-cost enthusiast machines I’d choose over the car now known as the 2017 Toyota 86; the Volkswagen GTI is an eminently more grown-up and well-executed vehicle, the Fiesta ST provides an objectively better driving experience, and the Mazda Miata not only remains the pinnacle of the everyman's sports car, but is now actually attractive. But in a world now almost entirely dominated by automatic transmissions and all-wheel drive, the fact remains that I can still go down to a Toyota dealership with $26K and drive away in an old-school sports car, rowing my own and letting the back end get squirrelly at legal speed limits. Toyota took a chance on the driving enthusiast, and for that I’m thankful.

A car that can do almost anything is a good car. The Subaru WRX STI is one of those vehicles. Drive to the local Sheetz for some last-minute milk and frozen dinners? Sure thing. Pick your kids up from school? Just watch the jaws drop on the other students' faces. Multiple track days in one month? Totally. Long-distance road trip? Yep. Throw a rallycross in there? Why not. Then add a snowy nor'easter component on each of those. Yeah—with the right tires—an STI would still be able to navigate almost any road with ease. The STI is one of the most reasonably priced, confidence inspiring performance cars on the market in America, and has been for the past 12 or so years. For that, I am thankful.

Puritanical as a pilgrim, the Ginetta G4 subscribes to the same regimen as sportscar legends like the Lotus 7: Simplify and add lightness. Unlike the Lotus, though, the Ginetta is wrapped in a slinky body that evokes a Jaguar D-Type in miniature. There’s a coupe and a roadster. The roadster is better—and lord, is it ever good to drive.

Shifter kart-low and typically powered by a Lotus Twin-Cam, driving a G4 is perfect simplicity—and the experience is simply perfect. A side-exit exhaust keeps the wail of the Twin-Cam on your mind. The view over the swells and valleys of the backwards-opening hood allows for perfect tire placement. It’s just tense a bundle of good steel and soft tire and high-strung engine; but the Ginetta G4 is everything you need to be forever thankful of the car.

I’m thankful for the uproariously and capable Cadillac CTS-V. A rear-wheel-drive family sedan that can easily kill the family isn’t a necessary thing, but, man, is it a welcome one. Those 640-horses in the supercharged V8 (the very same LT4 plucked from the Corvette Z06) lurking under the bonnet, waiting to be unleashed, will catapult you from a dead stop to 60 in 3.6 seconds. That’s proper for a 4,100-pound car. This four-door missile boasts 630 lb-ft of twist at 3600 rpm and feels like it’ll keep pulling all the way through the 6500 redline. Those six-piston front brakes, the five traction control modes, and the performance data recorder are all marvelous reminders that this is a grocery getter that is capable of destroying the groceries, should a lead foot get the best of you. This legitimate 200 MPH car will rearrange your face on its way past 100 miles an hour...into a broad smile. Simply sink back into those Recaro race seats, mash the accelerator and leave one helluva set of elevens.

Like many a car nut out there, this year, I find myself thankful for the Porsche 911R. Granted, I haven’t driven one yet, and with only 991 in existence and press loans available about as frequently as dates with Kate Upton, there’s a good chance I never will. But in an era when supercars and sports cars are becoming increasingly automated, increasingly digitized, and increasingly more concerned with prioritizing absolute performance over driver involvement, the simple fact that Porsche saw fit to build the widebody, rear-wheel-drive, manual-gearbox-equipped 911 Porschephiles have been dreaming of for years is enough to make me smile. I may never tear ass through Topanga Canyon in one…but knowing I could is enough to make me happy.

I'm thankful for the persistent and inexplicable survival of Morgans. Any Morgan. Every wood-framed Morgan sold is an investment in analog engineering, human skill and a future in which our grandkids can still control their destiny, free of government surveillance, driver "assistance" and regulatory coddling. Human driving forever.

There are so many cars to be thankful for – the '74 Olds that shuttled my friends and I across the country in 40 hours and the '65 Chevy I drive to the beach, for starters. But I must give credit where credit is due, to my 1987 Subaru GL 4WD wagon, the stolid workhorse that has carried so many tools and Craigslist parts – not to mention my wife and I – back and forth across the Mid-Atlantic and even the continent time and time again. It's not fast and not many people think it stylish, but it gets the job done and in any kind of weather.

Come Thanksgiving, I would like to give thanks for my 1998 E300 Turbodiesel. There is plenty of nostalgia having ridden in and driven it over the past 19 some years. When it was new diesel racked up at $.89 a galloon. Fuel prices have changed, but 700 miles on one tank will still take you places. You may be stuck with a cassette player, but that and the dings are what people these days call character. At the end of the day, road trips have been taken, moves have been made, and the old Benz is doing just fine.

This is the car that cemented the strong relationship I have with my Dad. Primed with anecdotes about driving and owning air-cooled Porsches during his earlier, pre-married years when I was a kid, I spotted this car on a Toyota lot in Chicago and made him test drive it. He bought it when I was nine, drove it for a few years, and then it sat. In the past year, though—after incessant begging—it has undergone a bit of a resto-mod, and now runs powerfully, oozes with charm and character, and is something my Dad and I both cherish greatly.