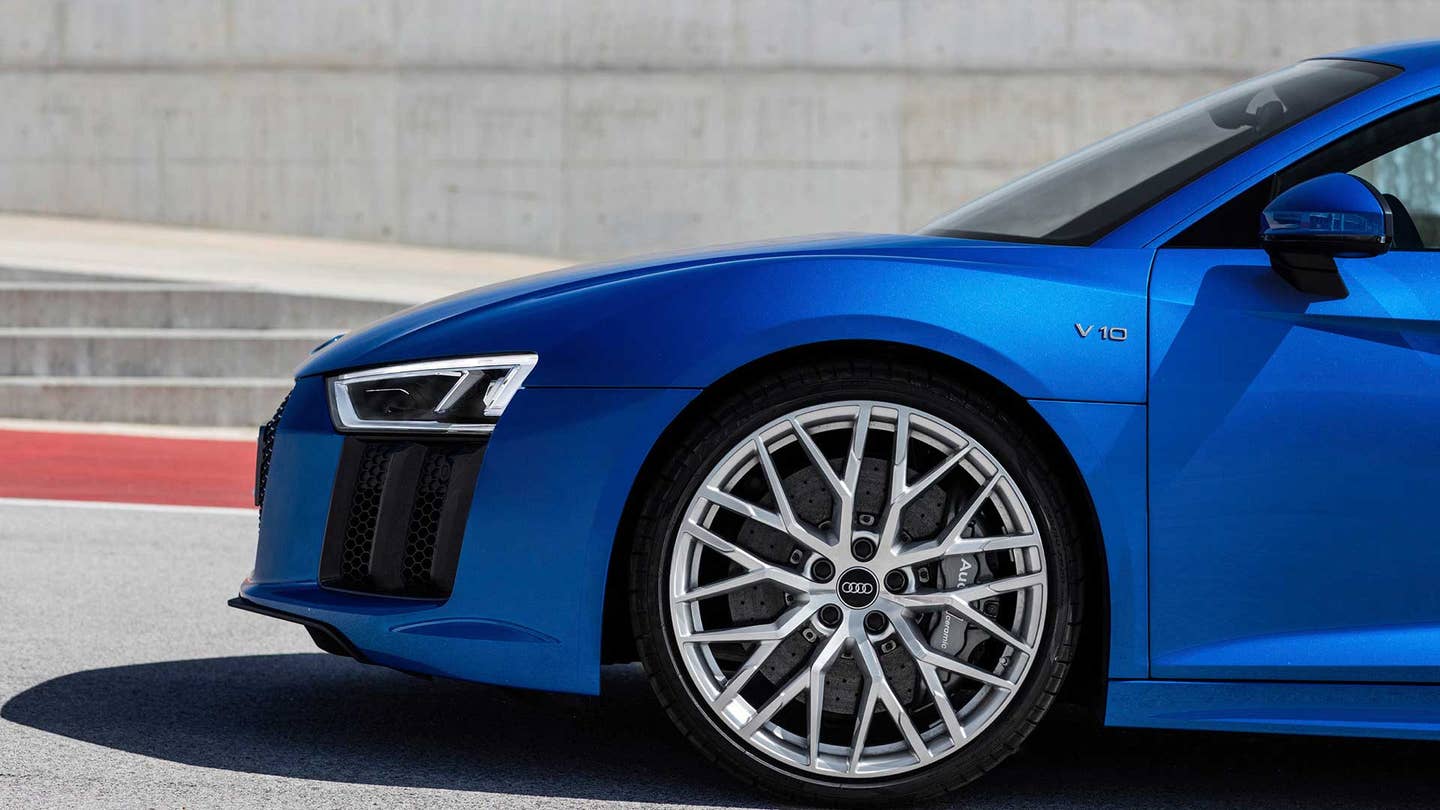 Dealing with powerful, exotic machinery on a regular basis, things can go wrong. Really, really wrong. So when we were offered a quick drive of a European-spec, pre-production 2016 Audi R8—of which only two exist stateside—we promised to treat it like a little German fawn. Everything will be fine, we said. Trust us.

This is a car worth bargaining for. Since appearing in 2007, the R8 has held a unique place in the pantheon of sports cars. Great styling, star power—a killer Super Bowl ad, then a cameo as Tony Stark’s ride in Iron Man and The Avengers—plus the cache of Audi’s gazillion Le Mans victories to back it all up. And while the R8 doesn’t have the performance of, say, a Ferrari 488 GTB, it doesn’t carry that hefty price tag, either. Oh, and it’s still naturally aspirated, too.

When the all-new, second-generation R8 launches this fall, it’ll come in two flavors: V10 (5.2 liters, 540 horsepower) and V10 Plus (610 hp). The latter is the most powerful production car Audi has ever offered. We had the former, a sky blue beauty that stank of sophistication. Expectations couldn’t be higher. But before trying this new R8 out, we had to turn it on.

Trust us. Stuck in a Whole Foods parking lot at midnight, we were eating our words. Smack-dab in a strange Atlanta neighborhood, we’d switched off the car to take photos under a streetlight. Then we, uh, couldn’t get it started again. The dash interface said to reposition the key in a certain place. The spot was listed in the owner’s manual. Which was auf Deutsche. Because Euro-spec pre-production.

Panic. Seething, drawn-out minutes. What to do? Leave the car in a random neighborhood overnight as a canvas for local graffiti artists? Ask the homeless guys commiserating on the corner if anyone speaks German? Who from Audi would pick up the phone at this hour? Then, salvation: a tiny emblem embossed on the steering column, nearly impossible to see at night, but worth a try. We placed the key fob next to it and said a little prayer.

We tore out of the lot, two fat rubber stripes in our wake.

The R8 does that. In V10 Plus guise, it’ll hit 62 mph from zero in 3.2 seconds. Faster than the last generation by a half-second, though the styling isn’t much changed—smart, since it’s wonderful as is. Official figures for the American-spec car aren’t available yet, but Audi claims fuel economy and emissions are improved. Thank the cylinder-on-demand system, a first for the R8, which shuts down one bank of the engine under low revs, alternating between 5 and 10 cylinders for efficiency. Credit, too, a lighter curb weight, more than 100 lbs off the previous generation. That’s because the frame is all-new, an aluminum/carbon hybrid chassis pinched from Lamborghini’s Huracán LP 610-4. The cockpit is pure modern Audi, all high-quality leather and brushed aluminum and virtual dashboards—enough to make you feel a bit like, well, Tony Stark.

Our drive time with the R8 V10 was short, mostly in Atlanta's abhorrent morning traffic. Admittedly, we weren’t able to experience this automobile’s full capabilities. But we can report what we know: It’s a seriously hot car. Like previous R8s, it is unmistakably a mid-engine, rear-biased all-wheel drive setup. You can corner hard, never feeling like your feet are coming out from under you; all the weight’s stacked in the center. The ride is appropriately stiff, the magnetic dampers’ control adjustable. Sadly, the old gated manual shifter is dead, but this seven-speed dual-clutch marches on and delivers quick shifts. Engine? Operatic. There are numerous driving modes, and even more ways to tweak the settings within each one, so you can custom fit this ride to your liking.

Mostly, this short date with the new R8 left us eager to take it out again, especially once the fully realized U.S.-spec version is ready. It’s a long-awaited update to an already laudable car, and early signs say Audi hasn’t messed with a good thing. Pretty straightforward. Well, except the key fob.

(Note: We also got an exclusive drive of the Audi’s new R8 LMS GT3 race car at Road Atlanta. Stayed tuned for that story.)