Driving an Electric Snowmobile Is a Blast, but Range Could Be a Dealbreaker

The 2022 Taiga Nomad is awesome, full stop. You just have to look past its lower range and high price. 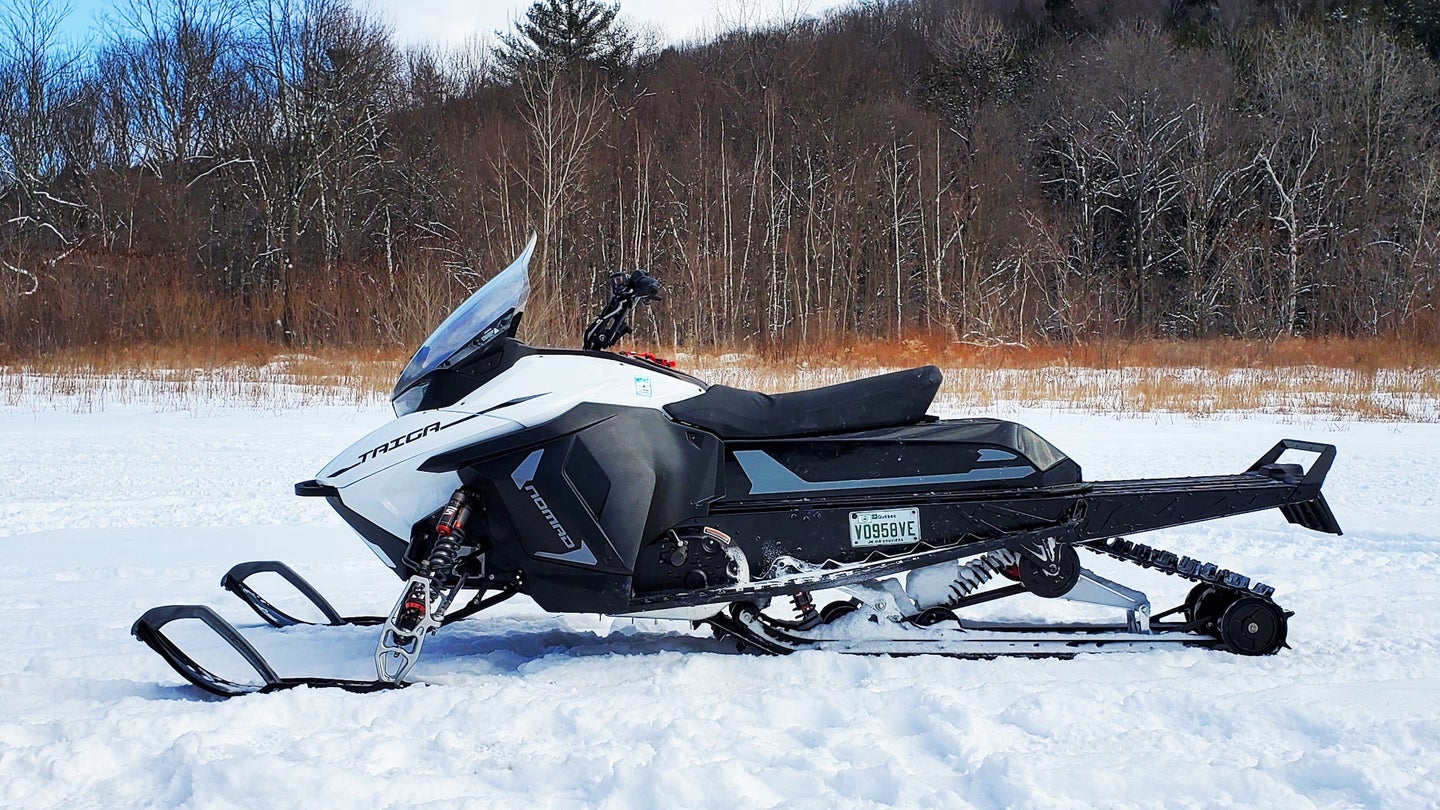 Electric cars—at least to me, a person who's enthusiastic about cars—make sense. Cars roll across the surface of the Earth and can operate in warm places where charging infrastructure can readily exist. (Note: "can" doesn't necessarily mean "does.") But an electric snowmobile? Giving battery power to something that's inherently inefficient and meant to be driven in cold temperatures? That's like tackling Level 10 of the electrification game. Yet, a Canadian company called Taiga has gone and built just that with the 2022 Taiga Nomad. Riding it gave me a glimpse of what emissions-free and (relatively) quieter outdoor adventuring could soon be like. It's certainly fun but not without its compromises.

Though still only available to pre-order at the time of this writing, the Nomad will be the first production, all-electric snowmobile when initial deliveries commence this winter, according to Taiga. [Update Mar. 18, 2022: Deliveries began today.] It's a good few thousand dollars more than even some of the nicer, gasoline-powered snowmobiles out there, but what you're getting is something that's the first of its kind.

Looking at the Nomad, it's not that different from a conventional snowmobile—which was perhaps the entire point. You can eventually expect three different snowmobiles from Taiga: the Atlas for trail performance, the Ekko for mountains, and this, the Nomad, for more all-around tasks like trail-running and towing stuff. That's why it has an especially wide, 42.3-inch front track and a towing capacity of 1,125 pounds.

The Nomad does offer regenerative braking in low and high modes—here controlled via some toggles on the left-hand handle—which is cool. Just like in a car, however, you cannot swap out the battery for a fresh one if you deplete it. It is completely sealed against the elements—Taiga used its knowledge in personal watercraft here—so if you get stuck somewhere, you do have to figure out your own charging situation. A thermal management system uses a separate, 12-volt battery to bring the coolant up to temperature and sends it through the battery pack, and has a rear heat-exchanger to cool the powertrain back down.

The biggest adjustment you have to make while riding the Nomad is there really isn't any obvious indication that it's on (just like an EV). There's no idling engine to hear or vibration to feel. You have to check that the LED driver information cluster is glowing blue to know when it's go time. After that, operating it is largely the same as operating a gasoline-powered snowmobile. The accelerator is on the right and the brake is on the left. It is very easy to get the hang of.

Like all vehicles powered by batteries, the Nomad benefits from instant torque but is still very friendly to a novice rider like myself. The less-insane range mode—designed to conserve the battery—still delivers a fair thrill as you punch the accelerator. Sport mode is the one you want when you're really trying to fly, though. Hit the accelerator when in that mode and it'll kick a mighty snap to your neck (in a good way). But at speed and on the forested trails of Stowe, Vermont, the Nomad felt extremely stable, no doubt owing to its wide track and length. I have no problem imagining a two- to three-hour cruise in this fashion—provided the battery doesn't deplete first.

And despite it having no engine, the Nomad isn't silent either. In addition to the grinding noise from the track, a persistent and high-pitched whir emanates from it that becomes more furious the faster you go. I frankly did not mind this; I liked it, actually. EVs sound cool and it's unfortunate that you can't really hear anything that isn't piped in when you're driving a car. Here, though, the noise is on full aural display. I don't know how it sounds from far away, however. I'm also curious if an electric snowmobile would be less disturbing to local wildlife, but this is what it sounds like from the saddle.

Letting off the accelerator means the Nomad stops pretty abruptly, so unless you have to panic-brake, I don't imagine you'll need that left-hand lever very much at all. I spent a few minutes learning how to balance the accelerator with how the snowmobile naturally slowed down and found myself acclimating to its one-handle driving almost instantly. Whether I was creeping forward or using the power to maneuver a chicane, I didn't need to touch the brake once. At one point, a crowd of gasoline-powered snowmobiles roared past, spraying the 19-degree air with acrid exhaust fumes and I was powerfully reminded of another of the Nomad's advantages: no emissions from a two-stroke to stink up the trails with.

The one thing I had to be mindful of was the steering. At close to 700 pounds and with a wide track, there's no power steering, so turning the Nomad at low speeds demanded more than my pandemic-lockdown-atrophied muscles could adequately deliver. My advice? Read the trail signage and don't accidentally go up a path you aren't supposed to and be forced to attempt a K-turn, fail, and instead let the nice Taiga rep finish off the turn for you. Everything's dandy once you're moving, though!

Fast or slow, the Nomad proved to be a comfortable ride. I got the feeling that not much would upset its unflustered demeanor. But I will note that the trails I rode on were groomed, so I'm curious as to how the weighty Nomad would fare on ungroomed trails and in much deeper powder.

Seeing as no one else makes an electric snowmobile, the Nomad is kind of in a class of its own. But I know those of you out there reading these stats will have rightfully noticed that the Nomad's estimated range, even in ideal conditions, is on the low side. And seeing as the Nomad is meant for trail-running, the range is pretty important. Who knows how far away those trailheads can be? And it's not like there are chargers readily available out there in the great wilderness if you deplete the battery.

Then there's the price. When it goes on sale, the Nomad will start at $17,490, which is a lot more expensive than most gasoline-powered snowmobiles on sale today. This, by the way, does not include the 2,000 performance suspension with Elka dampers. The all-electric and zero emissions aspects are cool, but are they worth ponying up an extra few thousand for? Especially when the Nomad's reliability and ability to handle unmanicured trails are still unknown factors? I don't know.

Perhaps the reason why there aren't more electric snowmobiles is that the whole concept is a catch-22. Cold temperatures are the enemy of battery-powered anything, and you cannot drive a snowmobile unless it's cold out and there's snow on the ground.

If I were to fabricate a viable and realistic situation for the Nomad in my head, it would be one where they're being used as utility vehicles (so you can dip into the towing capabilities) on places like ski mountains, wilderness lodges, or national parks. Or, some sort of facility where there are dozens and dozens of miles of groomed trails. Just someplace where a charging base isn't terribly far away. An open-ended exploration chariot this is not, I think.

But don't let those compromises from how fun the Nomad is to ride. The power is extremely smooth when accelerating and decelerating, it looks cool as hell, and you can do a motorized outdoor recreational activity without emitting smelly fumes. True, for the average snowmobiler, its price puts it out of reach for now. But if you've got the cash and a burning desire to own the first production electric snowmobile, the Nomad beckons. Who knows? Maybe with the price of fuel the way it currently is, you might even wind up breaking even.