Think camping with kids is a pain? Not with the Roofnest Falcon rooftop tent. 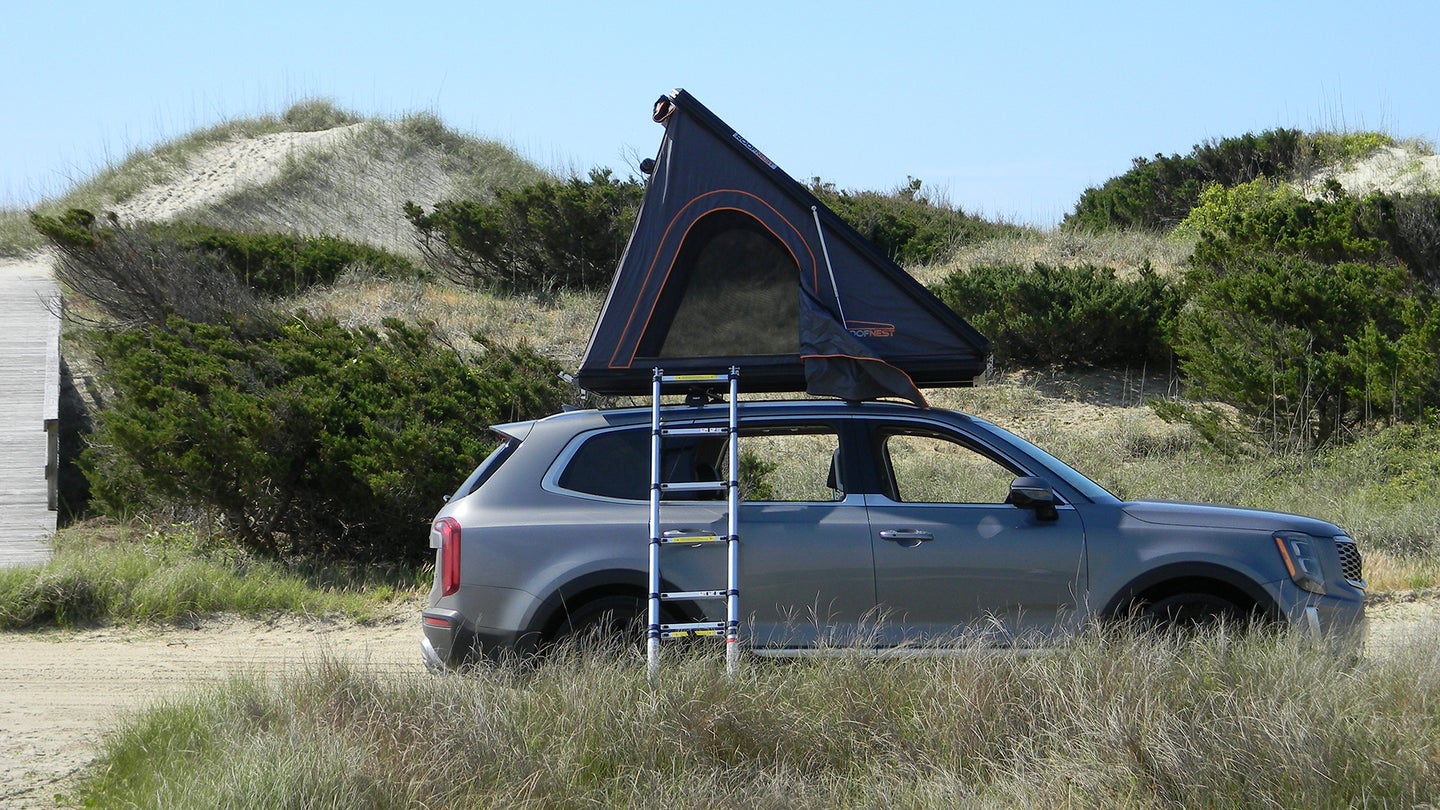 We’re not a camping family.

Don’t get me wrong: It’s not like we hate nature. My wife and I both spent considerable time in the great outdoors when we were young. We may have even been a camping couple at one point in our pre-child years. But we're not a camping family because let's face it, the hassle of doing so with kids tends to outweigh the benefits. It's just more trouble than it’s worth, pretty much every time.

Sleeping under the stars, making s'mores over the open fire, stepping out from your tent into a boundless wilderness—these are all dreamy ideals for a family adventure. But when it comes to the actual work of camping, the adults are left to do it all, while simultaneously squashing interminable complaints about dirt, WiFi and air conditioning like so many bugs. At the end of the day, we need another vacation from our vacation.

So, no, we're just not a camping family. But when the opportunity came along to test out a rooftop tent, the kind that requires little to no set-up or breakdown and keeps campers up off the ground, away from the bugs and the dirty dirt, we thought perhaps this was our chance to show our kids how much fun camping can be, pandemic be damned.

2020 Kia Telluride, By the Numbers

The New Breed of Tent Camping

Car camping is having a moment. Rooftop tents have been around for years, of course—but RTTs have become particularly popular in the topsy-turvy year that is 2020, and aptly-named Roofnest is one of the most popular manufacturers. For this expedition, we loaded up a 2020 Kia Telluride, slapped one of the company's marquee products on top and made for North Carolina's Outer Banks.

The 88″L x 48″W Roofnest Falcon ($3,395; XL, $3,495) that was provided is the company’s largest rooftop tent. Made of lightweight aluminum, it weighs just 140 pounds despite its size and mounts to existing crossbar racks in minutes with four bolt-on u-clamps. The XL versions of all of Roofnest's tents gain an extra 10 inches of width. It's a no-brainer in my book.

The Falcon pops up from the back like a clamshell, with easy, one-hand actuation. Just flip the two clamps open and give it an easy push, and the Falcon raises on hydraulic struts to reveal a fully-operational RTT with 60 inches of headroom at its peak. Simply extend the included telescoping ladder and climb right up; your tent is ready to use in a matter of seconds. A three-inch-thick waterproof pad makes it comfortable, so all you need is a sleeping bag and a pillow. It's so easy, you could be resting comfortably in your RTT within minutes of pulling over.

The advantage of this on multi-day road trips is obvious and undeniable. Who wouldn’t love to be able to take a rest almost anywhere alongside the road? And in a proper campsite, being up off the ground where you can survey your domain from on high and feel the breeze, makes the camping experience far less of a hassle than ever. Even with kids.

Up Off the Ground

Sleeping in the Falcon was comfortable in the gorgeous, rustic confines of the sand dunes at Cape Hatteras National Seashore. It was particularly neat to be high enough to see the ocean over the dunes; the sea breeze flowed through the screens and kept us cool and comfortable all night long. The ladder even provided the unexpected benefit of knocking (most of) the sand from our feet as we climbed up, keeping the tent floor relatively clean. Campsite set-up was easy and fast, and packing up was relatively simple, too.

It's no exaggeration to say that our setup was the envy of the campground. Folks walking by kept pointing and a few even stopped to ask about it. Most expressed how much simpler the Falcon was to set up than their old-fashioned pole-and-stake tents. It’s definitely easier, and far more comfortable than sleeping on the ground.

Many passers-by went so far as to look up the Roofnest on their phones, and some even stumbled across Roofnest’s active and passionate Facebook user group. People really love their Roofnests, and for us and everyone in the campground at Cape Hatteras, it was plain to see why.

If car camping is indeed having a moment, Roofnest is ideally positioned to make the most of it. If you’re thinking about joining the RTT movement, we can’t imagine a better option than the Falcon. Fit and finish is superb, materials are solid, components are purpose-built and carefully considered, and (most of) the actuation is far easier than we imagined. That said, the Falcon isn’t without a few drawbacks.

Roofnest claims the Falcon—and indeed, all its RTTs—will sleep two adults. Frankly, that’s a bit presumptuous. At just 50 inches wide, the Falcon is narrower than a double bed. I’m fairly average-sized (5’11”, 185 pounds) and was able to sleep up there with one child pretty comfortably. But two full-grown adults? Whoever you’re camping with better be ready to snuggle up.

Also, while raising the Roofnest is a cinch, securing the Falcon shut isn’t easy for one person. Standing on the ground, I just couldn’t get the metal clamps to close securely. Ultimately, I clambered up on top and sat on it, like an overstuffed suitcase, directly above each clamp. And even then, I had to pound on the clamp pretty hard with the butt of my hand to get it to fully engage. Of course, the Roofnest is super tight-fitting for obvious reasons; there is no way this thing is coming undone on the road, and that’s reassuring. Still, I wished I’d packed a rubber mallet.

The telescoping ladder is sturdy and simple to use. But at about 2’x3’ when collapsed, it does take up valuable space in your trunk or cargo hold. Even with a large SUV, moving it out of the way and searching around it every time we looked for something made us pine for a way to stash it inside the Roofnest. (As tight as it is, the tent has to be completely empty in order to clamp shut; you can’t even leave your bedding up there.) I'd love to see a cargo box-shaped version of a Roofnest to accommodate a bit of storage. Failing that, I'd settle for a small bubble in the shell (or perhaps an indentation at the foot of the sleeping pad) in which to store the ladder.

Finally, it needs to be said that any rooftop tent wouldn’t be ideal on a luxe SUV like the plush, fully-featured Telluride.

The platform of the Falcon covered the entire roof of the Kia. As a result, the kids couldn’t see out the rear moonroof, and with an open sunroof at highway speed the wind noise in the cockpit was unbearable. It even blocked a clear signal from the satellite radio. And relatively light though it may be, the Roofnest docked us about three miles per gallon on the highway; for a full-size SUV that barely makes 25 mpg anyway, that’s not insignificant.

So even though the Roofnest is designed for “getting away from it all,” many of the creature comforts that make the Telluride such an impressive highway machine were rendered useless by the very device that got us onto this road trip in the first place. It would have been nice to drive the Outer Banks Scenic Byway listening to Willie’s Roadhouse while enjoying as much fresh air as possible.

This isn't something I'd want to keep on the roof of my daily driver for an entire camping season, and taking it off after every trip might get old. Thankfully, it's a cinch to install.

Car Camping In The New Reality

Roofnest makes four distinct tents. The full-size Falcon is ideal for large pick-up trucks, Jeeps and SUVs; if you’re going off-the-grid for an extended period of time, it’s worth the extra money. For CUVs, the fold-out Condor ($2,995; XL, $3,195) is the right choice. It extends off the side of the vehicle and is supported by mounting poles. The square pop-up Sparrow ($2,895; XL $3,095) is perfect for larger autos, and the Sparrow EYE ($2,895) is a car-friendly clamshell tent that’s ideal for solo travelers in small cars. All of the Roofnests mount easily, fold up flat and are simple to use, even for one.

I have to admit that despite a few drawbacks, the Roofnest Falcon is an ingenious device that worked exactly as advertised. It’s well-made, easy to use and a great conversation starter. We got a ton of eyeballs and questions from curious campers, a few long stares at gas stations, and several thumbs-ups while on the road. The girls really enjoyed camping (and playing) in the Roofnest, too, and they had a lot of fun showing it off.

The Falcon is relatively easy to use, far less work than a ground tent and innovative and cool enough to make camping fun—even for my kids, and that’s saying something. Perhaps we are a camping family. We’ve just been doing it all wrong.

Disclosure: Roofnest provided a tent as well as a fully gassed-up Kia Telluride for the purposes of this review.