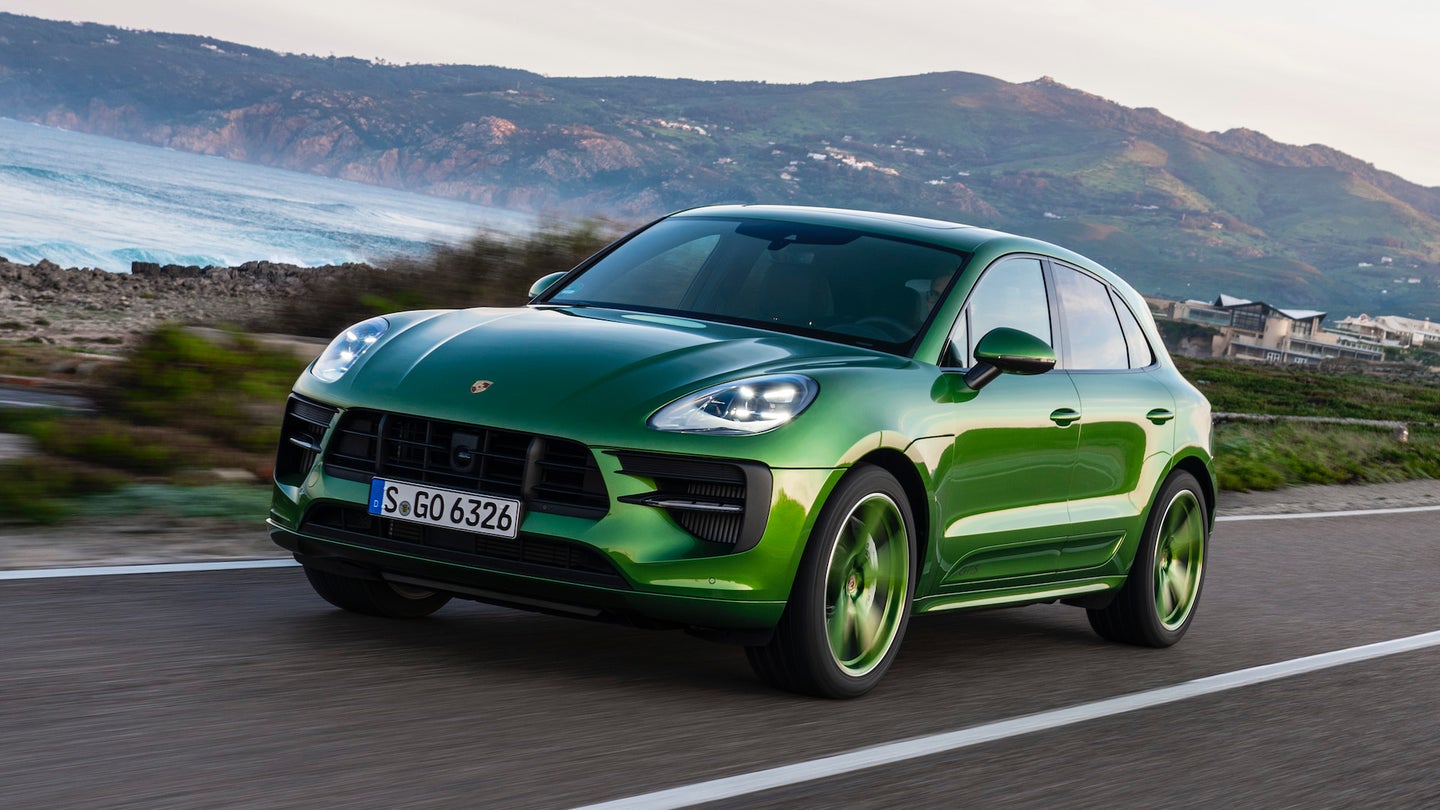 Few automakers can elevate the driving experience with gimmicks like Porsche does. You might be poking through traffic in Bayonne, New Jersey or zippering into one lane on I-94 between Milwaukee and Racine, but one look at the Macan GTS’s Carmine Red tach and you’re Jacky Ickx on a midnight lap at La Sarthe. Or, at the very least, Jacky Ickx on his way to pick up the kids at soccer practice.

Indeed, the GTS is the most stage-managed version in the Macan line. Alongside the telltale tach, various blackout trims, accents and tints introduce Zorro-like theatrics that telegraph its performance-minded profile: slotted midway between the Macan S and the Macan Turbo. (Want more presence? Order it in the resale-defying Mamba Green Metallic with matching body-color wheels, like our test car.) Theater isn’t everything, of course, and the GTS has traditionally been the best to drive of all Macans. But does fiddling with the GTS formula yield an even better-to-drive Macan for 2020? Let's see.

(Disclosure: Porsche flew me to Portugal and paid for all my food and booze. I did pay for my own Pastéis de Nata, and I wasn't anywhere near a PR person's credit card for that.)

The 2020 Porsche Macan GTS, By the Numbers

Like the stalwart older brother in an Irish rite-of-passage drama, the larger Porsche Cayenne absorbed blows from purists forced to share the family crest with an SUV. The smaller, stealthier Macan snuck through without much resistance, and has since stood as the most fun to drive in the didn’t-know-we-needed-it compact crossover SUV category. And the GTS is indeed the most fun-to-drive entry in the Macan line—more so than the last Macan Turbo I drove, which felt like too much engine for that particular chassis.

Porsche's GTS strategy inspires my inner product-planning nerd with its elegance; it's a three-pronged masterclass in packaging. First, bundling options at a retail discount provides the enticement of value for money. Second, including unique features unavailable on the Macan S offers a “value add,” an enhancement that increases the value of a product or service. Third, positioning-wise, the GTS sets a standard for handling dynamics. With most compact crossovers that claim would ring hollow, but the Macan has always aimed higher than its counterparts.

The Show Must Go On

Snaking along unnervingly narrow B-roads inside Portugal’s Sintra-Cascais Natural Park, the GTS’s steering is precise and (are we dreaming?) offers up more feel than the previous version seemed to do. This is odd. No one’s expecting Cayman-level feedback from a 4,400-pound crossover, but it’s possible the Macan’s new engine mounts help create a more direct, better-controlled connection between engine and chassis. Even diving deeply into corners, the chassis settles promptly, and you're back on the power with almost unsettling quickness.

All of that could have more to do with the amount of performance gear loaded into the GTS. The latest Macan follows the template of past GTS models, costing around five grand less than a Macan S if you bothered to option one with similar equipment yourself. Some big-ticket items are standard, like adaptive air suspension ($2,750), sport exhaust ($2,930), and LED headlights that swivel into turns based on steering angle and road speed ($1,730). Other cosmetic add-ons like the Alcantara-covered GT Sport steering wheel ($1,190), Sport Design side skirts ($1,000), and various black and brushed-aluminum trim pieces, all running in the hundreds of Porschebux, are also standard.

Considering how much Porsche pockets in transaction profits from some of these options, value is no small part of the package. Now, this is Porsche, so there’s plenty of room to push the price ever higher, with a range of goods from premium paint to elaborate upholstery stitching, to ceramic composite brakes, and more. While the Macan GTS starts at $72,650, you’re never more than a few ticked boxes away from smashing the six-figure ceiling with extreme prejudice.

The third leg in the GTS tripod comprises stuff you can’t get on a Macan S. If you want the attractive, 20-inch RS Spyder Design wheels on a Macan S, for example, you’ll have to choose 21’s and shell out $3,370. Also, the GTS’s specific engine and chassis tune are unique to the model; the lower ride height, more aggressive air-suspension calibration, and extra power can’t be had on the Macan S at any price.

I’ve always thought it odd that Porsche doesn’t make the Sport Chrono package, with its Sport Plus shifting protocol with launch control, and performance-enhancing stability tune, standard on the Macan GTS (a similar Sport Chrono package is standard on 911 and 718 GTS models). After all, it’s only a  $1,360 drop in a very large bucket, and it adds notable sparkle to the Macan’s driving dynamics. It also shaves the base model’s zero-to-60 time by two tenths to 4.5 seconds.

The extra quickness, plus the added responsiveness of the latest active air suspension and sport-tuned PASM active damper setup, with 25 mm lower-than-standard ride height (and subsequently lower center of gravity) give the Macan GTS even more of a tall-hot-hatch sensibility than the previous version had.

Like the Macan Turbo, and also the Cayenne S (and Audi RS5), the new GTS gets the corporate 2.9-liter twin-turbo V6. Even at the GTS’s state of tune, 375 horsepower and 383 pound-feet (15 hp and 14 lb-ft more than its predecessor), it’s potent at all engine speeds, and its later torque peak compared to the previous GTS’s 3.0-liter V6 (now at 5,000 rpm instead of 4,000 rpm) gives it more dynamic range and some needed aural activity in an otherwise quiet and drama-free experience. In fact, the biggest downside to the Macan GTS is how deeply hidden its iron fist is beneath the plushest of velvet gloves imaginable. While its performance capabilities are vivid, it’s light on the sensory inputs to match.

Here's What Else You Get

Naturally, if you’re looking for the most exhilarating driving experience from the Macan GTS, you'll flick the rotary knob into Sport Plus mode (if you’ve got the Sport Chrono package) triggering PDK to hold shifts longer. You'll engage the stiffest damper setting, and otherwise keep all systems operating at their most conspicuous, with roll resistance more acute, and the ride least absorptive. Even then, you find yourself pushing harder and harder, trying to get it to talk back, and it never does. Eventually, you'll bang up against the limits of mechanical grip, which are high, and—also owing to a set of comfortable, supportive sport seats—you'll give up and just enjoy the deprivation chamber. That overall lack of drama could be why improvements in steering feel are so noticeable.

Choosing the optional GTS interior package (in Carmine Red or Chalk gray) adds embroidered script on the front and rear outer headrests, similarly colored seat belts, tacho dial, seat seams, the center console and upper control panel, the door panels and floor mats (see images above). A cynic might say Alcantara trim in a crossover SUV (available with the optional eight-way adjustable sports seats) is just more motorsports gimmickry, and in most cases they'd be right. Still, strategic accents in faux-suede add tactility and character to the Macan's sea of supple leather. Sure, inside there are a lot of console buttons, especially in models equipped with the Sport Chrono package, but that's no hardship once you get used to their placement. The standard multifunction sports steering wheel with rotary mode dial upholds the Porsche DNA, the eight-way-adjustable sports seats with side bolsters are supportive, and the current Porsche infotainment gear feels visually and operationally up to date.

Overall, the GTS again stands apart with its well-tuned suspension that matches a pleasing ride and rock-solid body control. Assuming a track test would reveal the usual degree of mechanical grip, precise calibration of its brake-based stability control (front-wheel standard, four-wheel optional) and pleasing rear-biased traction breakaway, the GTS will again take center stage as the enthusiast’s choice in Macans. One lingering question remains: Who needs an $80,000 compact crossover with this level of performance and extra gear? Nobody, but if you do, you probably already have one.