Critic's Notebook takeaway: AMG can't transform the SLC-Class into a proper sports car, so leave the SLC43 and go for the SLC300 instead. 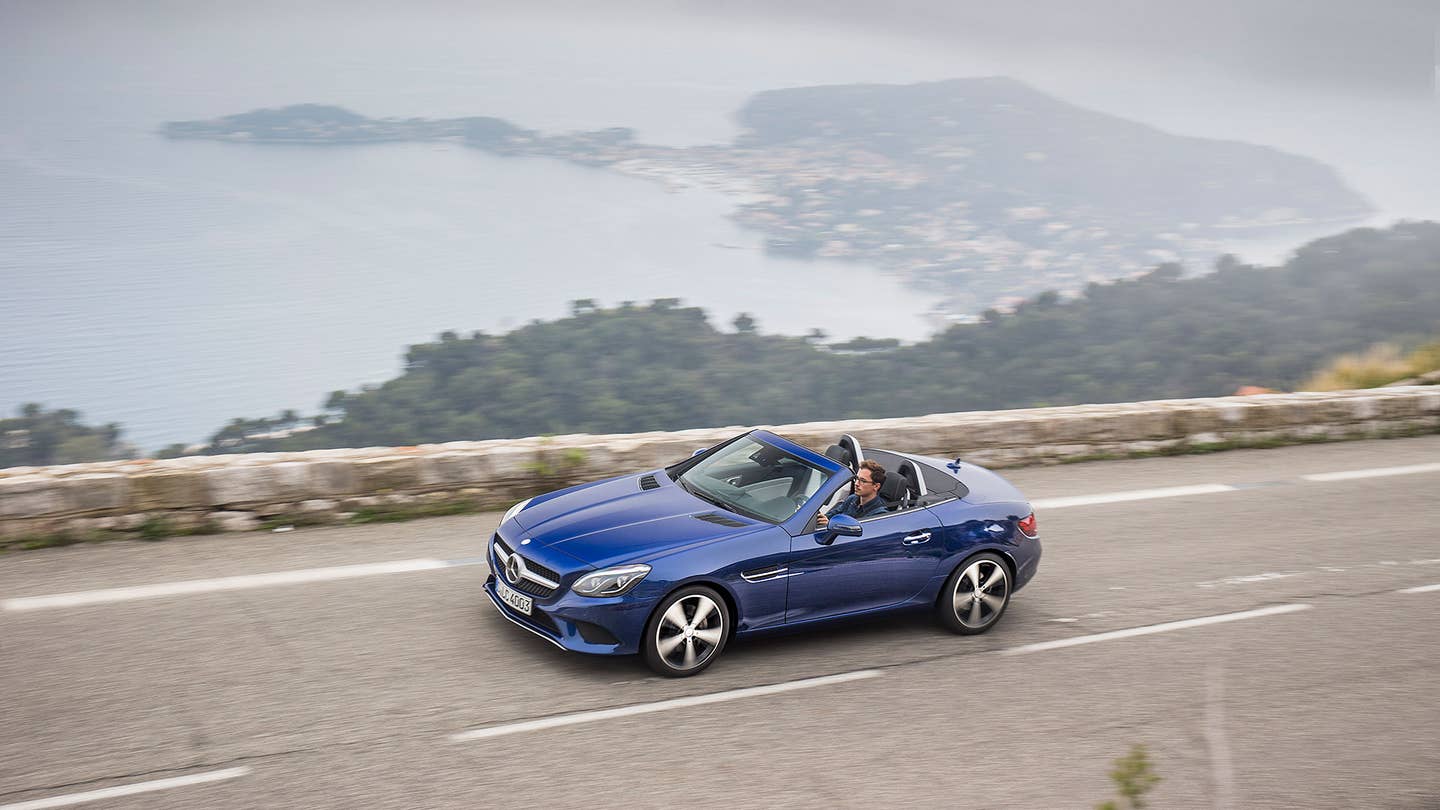 Welcome to Critic's Notebook, a quick and off-the-cuff collection of impressions, jottings, and marginalia on whatever The Drive writers happen to be driving. Today's edition: The new 2017 Mercedes-Benz SLC-Class.

Across the dinner table, the AMG engineer leaned forward on his elbows, looked me square in the eye, and said: "The best way for me to answer a question about brand dilution is to have you drive the car tomorrow. I think, when you see what we've done with the car, you'll understand why it's not something I'm worried about."

It was a good answer—a confident answer. But it seemed practiced and a bit too dismissive, and if I were facing him at a poker table I would have read it as a bluff. After all, the shift in nomenclature—appending "AMG" to the Mercedes name to make Mercedes-AMG—suggests that Mercedes' famously bonkers and slightly unhinged tuning division will have to start playing nice with the idea of using its name to add some performance cred to mainstream models but without the ability to go full Frankenstein on them. The fear, which must have run through that engineer's mind at some point, is that "AMG" will eventually become akin to BMW's "M"—a performance division, yes, but also a cynical, branded upsell for headrests and floor mats and shifters even for cars that get no performance bump whatsoever.

Case in point: the 3.0-liter, twin-turbo V6 in the new 2017 Mercedes-AMG SLC43 is raucously tuned, a snarling and eager 362-hp motivator that wrings the most out of its 384 lb-ft of torque starting at just 2,000 rpm. (Thank the nine-speed auto gearbox for allowing that down-low punch.) It's a good thing, but it's still a stock Mercedes mill with some AMG programming—a far cry from Affalterbach's famous "one man, one engine" ethos, of which the previous-gen hot-rodded Merc roadster, the SLK55 AMG, was a beneficiary. That tiny car had a naturally-aspirated and more powerful 5.5-liter V8 with 416 hp and 398 lb-ft crammed under its svelte bonnet. It was nose-heavy and overly muscular and more than a little weird; in other words, it was very AMG.

The SLC43 has a wonderful barking exhaust, is properly quick—from a standstill, 62 mph comes at just 4.7 seconds—and has some of the AMG characteristics, like light and fast steering, extra stiff dampers, and surgical throttle response, that define more dedicated performance models like the AMG GT. But it's an odd fit in the SLC, which is not so much meant as a tossable, corner-carving sports car in the Miata mold as it is a lite-luxury C-class coupe made smaller and open to the sky. Beefing up the performance aspects but without letting AMG properly get its freak on only serves to highlight the car's workaday nature; the engine begs you to push, and so you do, only to have the bulk (the car weighs 3,518 pounds), harsh ride, and mute steering come to the fore. It's like watching a fit actor playing an athlete in a movie: he looks right, and he sounds right, but once he starts swinging a bat or throwing a football, the disparity destroys the illusion.

I much preferred the non-AMG models, which don't encourage delinquent behavior and so allow you to enjoy what on its own terms is a fun and charismatic roadster. The SLC300, with its 241-horsepower, 2.0-liter turbo inline-four-cylinder, gets to 60 mph in 5.8 seconds—not slow, not blazing—but unlike the SLK43 the ride lets you engage with what the car can do, rather than forces you to notice all the things that keep it from being better. The sporty stance, like a tiny chihuahua butt on wide bulldog legs, kept things balanced but still allowed for a bit of rear-wheel play on the winding, dusty mountain roads of southern France, and the brakes held up quite well under hard work.

(My favorite of the lot was probably the 250d—a turbodiesel model that won't be coming to the US—with the caveat that the oil-burning mill lacked any aural personality whatsoever. Gunning the engine through a long, empty tunnel produced...nothing. No indication of acceleration whatsoever.)

If you're familiar with the C-Class's upscale, considered interior, you'll find more of the same here. It's a comfortable and usable cabin that makes the most of its small space, and has considered details like the Airscarf, which blows heated air from the below the headrest onto the back of your neck, to combat open-roof chill. There's also the transformable panoramic glass, a cool bit of technology that turns the sunroof opaque or clear at the touch of a button (note that I mispronounced the name in this video):

If you get into this car expecting a Lotus Elise you'll be disappointed, and no amount of butching up by AMG fixes that. But if, like the 670,000 people who purchased some variety of SLK during that model's 20-year run, you want a handsome and luxurious open-air two-seater that can provide a bit of fun when asked, the various SLC-Class models are really just competing amongst themselves.