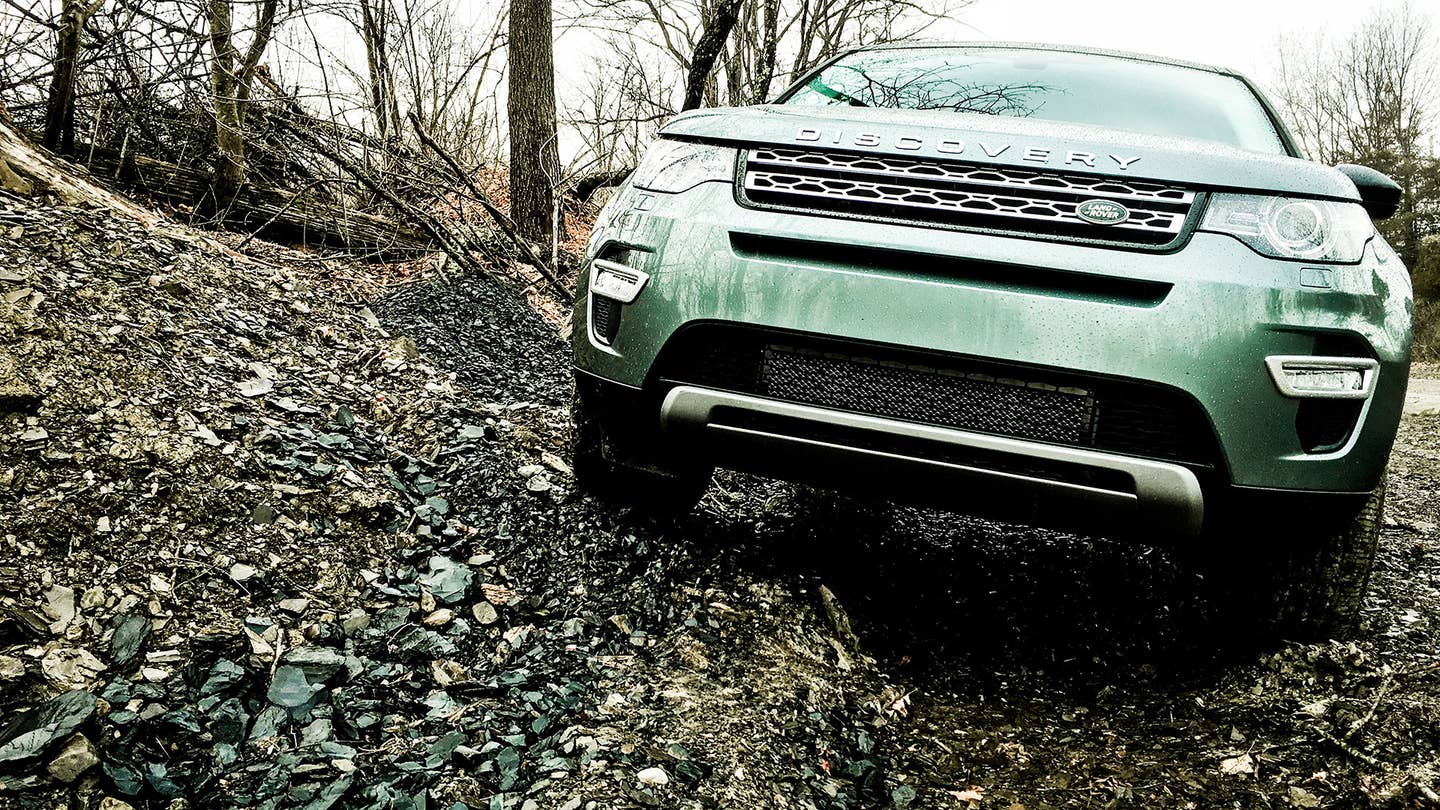 Fair warning that I am about to make an extended moot point. To wit: The 2016 Range Rover Discover Sport HSE is not only an absurdly capable off-road vehicle, but it is in nearly every way superior to the only other vehicle on the road as capable for 4x4ing and priced competitively with the Disco, which would be the $36,895 Jeep Wrangler Unlimited (JWU) Rubicon edition. That model in particular because it’s the cheapest Wrangler Unlimited with a hard top and leather seats, and both of those upgrades make the Unlimited at least slightly more livable as a daily driver.

Yep, JWUs, like most Discos sold in the U.S., are in fact 99 percent daily transport. Consider that 42,000 Wranglers (including Unlimited models) have sold through the first quarter of 2016. No way in hell most of those will touch dirt on a regular basis. By comparison, barely 4,000 Discos sold in that same period, and likewise the vast majority of those buyers aren’t headed for the nearest mud pit.

I know what you’re thinking: Most Discos aren’t selling at the $37,455 base price. The Luxury model we drove starts at $45,955 but with options, including seating for 7 rather than 5 passengers, it penciled out to $53,368. But if you can live without Windsor leather (which is nice but not astonishing) and cosmetics like optional paint, you can keep the sticker reasonable.

Even without the top-of-the-line options you’ll find a base-price Disco profoundly civilized. First, thanks to a nine-speed autobox the transmission never strains. The turbocharged 240hp, 2.0-liter four actually delivers enough mustard to keep the Land Rover from feeling pokey, and all the while the cabin remains church quiet. Yes, the Sport can still wade through nearly two feet of standing water (23.6 inches, to be precise), but for regular on-road duty, standard independent suspension keeps it steering safely, and with some agility to boot. Stock dynamic/roll stability control yields just a hair of toss-ability, too. No, the Disco is not an Evoque: it’s a family barge that won’t terrify you in case you need to take evasive action to avoid colliding with a deer—or the random texter I found driving toward me in my lane during my test drive.

Offroading is, as is seemingly the case with every Landie these days, cake. I threw a bunch of shin-deep mud at the Terrain Response system (also standard), steered onto a berm at 30 degrees, and just generally hooned around in the muck, and never once felt remotely concerned about the capabilities of a vehicle with 25 front/31 rear approach and departure angles, over eight inches of ground clearance, and full-time AWD. It's far more capable than anyone throwing over forty grand at a luxury SUV will need it to be. But so is living with the Disco because it’s comfortable for passengers, too, with an airy, modern, and sleekly British aesthetic inside the cabin, with heft and strength to key touchpoints, whether that’s the IP or a door handle.

In that sense, it's a century ahead of the Jeep Wrangler Unlimited I drove last winter. The Wrangler was only recently updated to a mere five-speed transmission, which is still too widely spaced not to find it hunting on a long uphill, and the 3.6-liter V6 is a thirsty beast, yielding a mere 16 mpg city/21 highway.

Ignore all of that if you want, but consider instead the user experience: The JWU is just crude. It corners scarily and vaguely when pushed, it’s LOUD at highway speed with the tires roaring, the blind spots are huge, and the rear seats are brutally uncomfortable. All of that’s neat-o if you’ve shed the top and are bombing around on a sand dune or rock-crawling high in the Cascades, but nobody gobbling up Unlimiteds in the ’burbs is getting their Jeeps dirty. They’re driving them…well, exactly the same way Discos are being driven: to Costco and to soccer practice.

P.S. Bro, please don't play the 'Merica card with the Unlimited okay? You're aware Fiat owns Jeep, si? A Honda made in Ohio is as "patriotic" as a Jeep made in Toledo.

The short version: For certain, macho poseur rigs are cool. But with my own dough I’d vote Disco every single time.