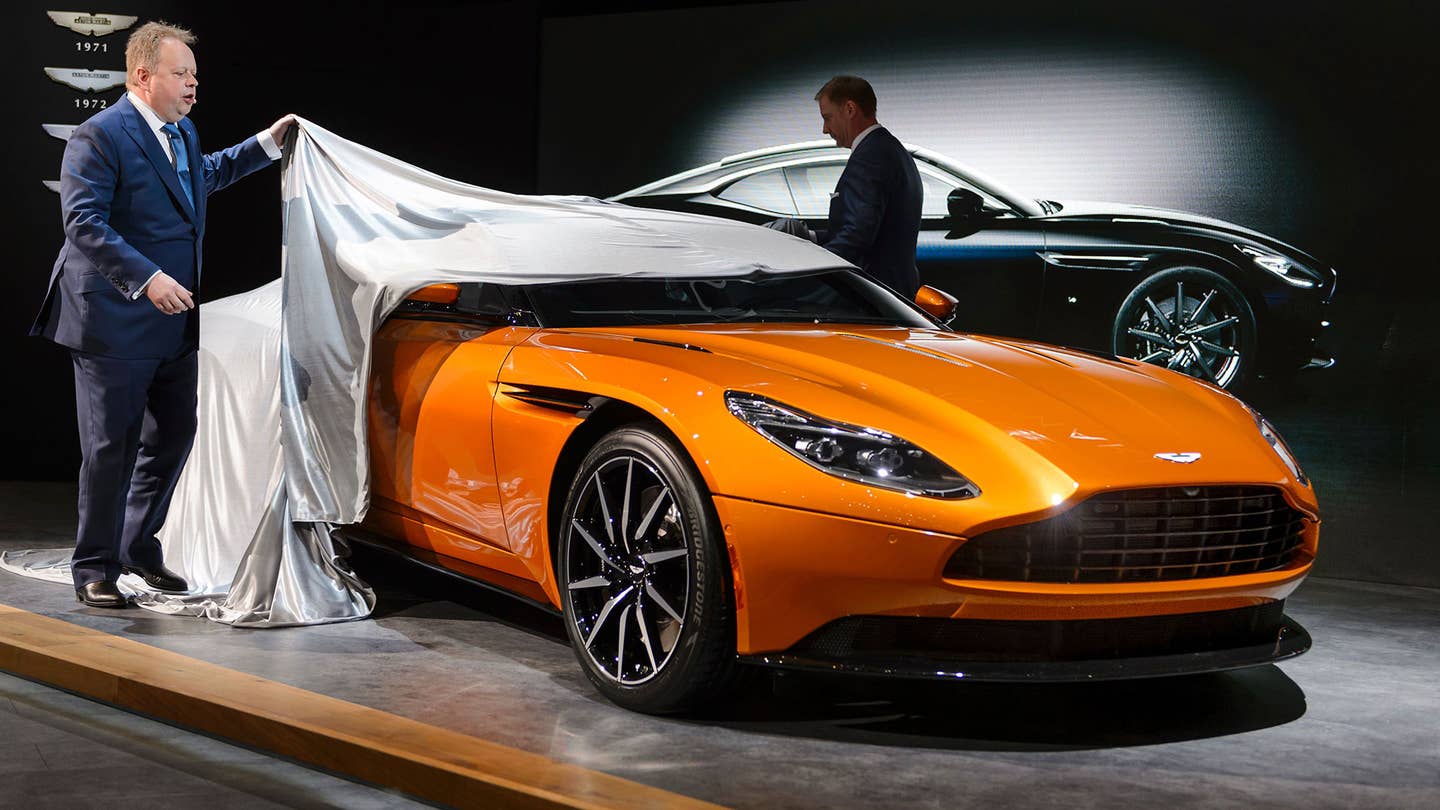 The Aston Martin DB11 has a Quiet Start mode. Press and hold the red button and the V12 comes whirs to life with the exhaust valve closed, muffling its typical full-rev bark. It's a lack of theatricality out of step with the entire DB11 program, which at every point reminds you that this is the first all-new Aston Martin in at least a dozen years!

Given the significance of that statement, we say give each cylinder in the new, 5.2 liter, twin-turbocharged, 600 hp V12 its own vuvuzela or air raid siren. This is cause for celebration, not subtlety.

"DB is who we are," says Aston chief creative officer Marek Reichman, who penned the new car. "It's our 911 in many ways. To replace a DB, for me as a designer, is an unbelievable moment."

The new design signals a new direction for Aston, at once sharper and more fluid. The openings are deeper and more aggressive, with an increased visual presence from the combination of less pronounced cut lines and bulkier musculature. Much like recent trends at competitors Ferrari and Lamborghini, the move is away from carbuncular and spoilered baffles and toward a graceful incorporation of aerodynamic aids.

On the DB11 this trend finds its most poignant application in the new AeroBlade™ system, wherein air is ported through a c-pillar opening and forced upward—like an invisible spoiler—through a slot on the trunk. Similar venturi-venting areas are located above the front wheel wells and in sliver-edged slots in the hood.

The DB11 is only two inches longer and an inch-and-a-half wider than the outgoing DB9, and is immediately recognizable as an Aston. And while the subtlety of change across recent Aston Martin cars has been a sign of limited resources as much as a devotion to heritage, the new exterior language signals a definite generational changing of the guard.

The only garish element is the aluminum roof strake that over-accentuates the type of “floating” roof design ubiquitous across lesser cars like Nissan Maximas and Opel Astras. Fortunately, this feature can be toned down by ordering it in body color, or in black.

As stunning as the exterior is, the interior is where the DB11 truly shines. Unlike all other modern Astons, the DB11 has the design, materials, and execution truly befitting a sporting, 21st century ultra-luxury vehicle. It retains the waterfall-style center console and crystalline push-button transmission controls tied to an 8-speed ZF automatic. But the seats, trim, ornamentation, and controls are all new—and exquisite. We're particularly drawn to the leather broguing, reminiscent of high-end wingtips, and the light open-pore woods. (We’re less fond of the chunky “chip strand” carbon trim, which despite being quite original still looks a bit like the faux-mica laminate in our grandma’s 1970s Ft. Lauderdale condo bathroom.)

Notably, the electronic architecture has finally been freed from its archaic, Flintstones-era prison with assistance from new investor Mercedes-Benz. The HVAC, navigation, entertainment, and dashboard systemshave been borrowed from the Germans, though we're guaranteed that these have been suitably “Astonized.” A glimpse at the digital analog tach/speedometer, inspired by the ersatz one in the Bond Car DB10, suggests it to be true.

"Though the underpinnings of the electronic architecture, the series of computers that run it, are the Daimler system, we have created our own custom graphics for every interface, so the point of contact is uniquely ours," Reichman says. "For example, we use the Daimler TFT screen in the dashboard, but we have placed an analog metal binnacle over it, like a piece of fine jewelry, because that's who we are. We are makers of fine bespoke automobiles."

Mercedes will also provide AMG V8 engines for future products, but here, gloriously, there's an all-new Aston Martin V12 engine under the hood—along with an Aston novelty in the form of dual twin-scroll turbochargers. It's a 5.2-liter mill with a 60-degree vee arrangement boasting—for the first time ever on an Aston Martin—conveniences like cylinder deactivation and auto stop-start. Aston claims that 60 mph will arrive in less than four seconds, that the GT will reach a top speed of over 200 mph, and that it will be quieter and far more efficient than any prior car. “An iron fist in a velvet glove,” as one Aston insider stated. The brand also claims that first deliveries will occur by the end of this year. (We assume one is already earmarked for The Drive’s first night of Hanukkah celebration on December 24.)

And this is just the beginning of a product offensive over the next several years, one that will involve a complete replacement of the current product line, the addition of all-new vehicles like the DBX crossover, and greater differentiation between the Aston models. "Our goal is that if Andy [Palmer, Aston CEO] and his mom walk into one of our showrooms," Reichman says, "she should be able to distinguish immediately between all of the different models." He points at imaginary cars in an imaginary dealership: "That's a DB, that's a Vanquish, and so on."

Fittingly, the first new model leading the company's charge will be the DB11.