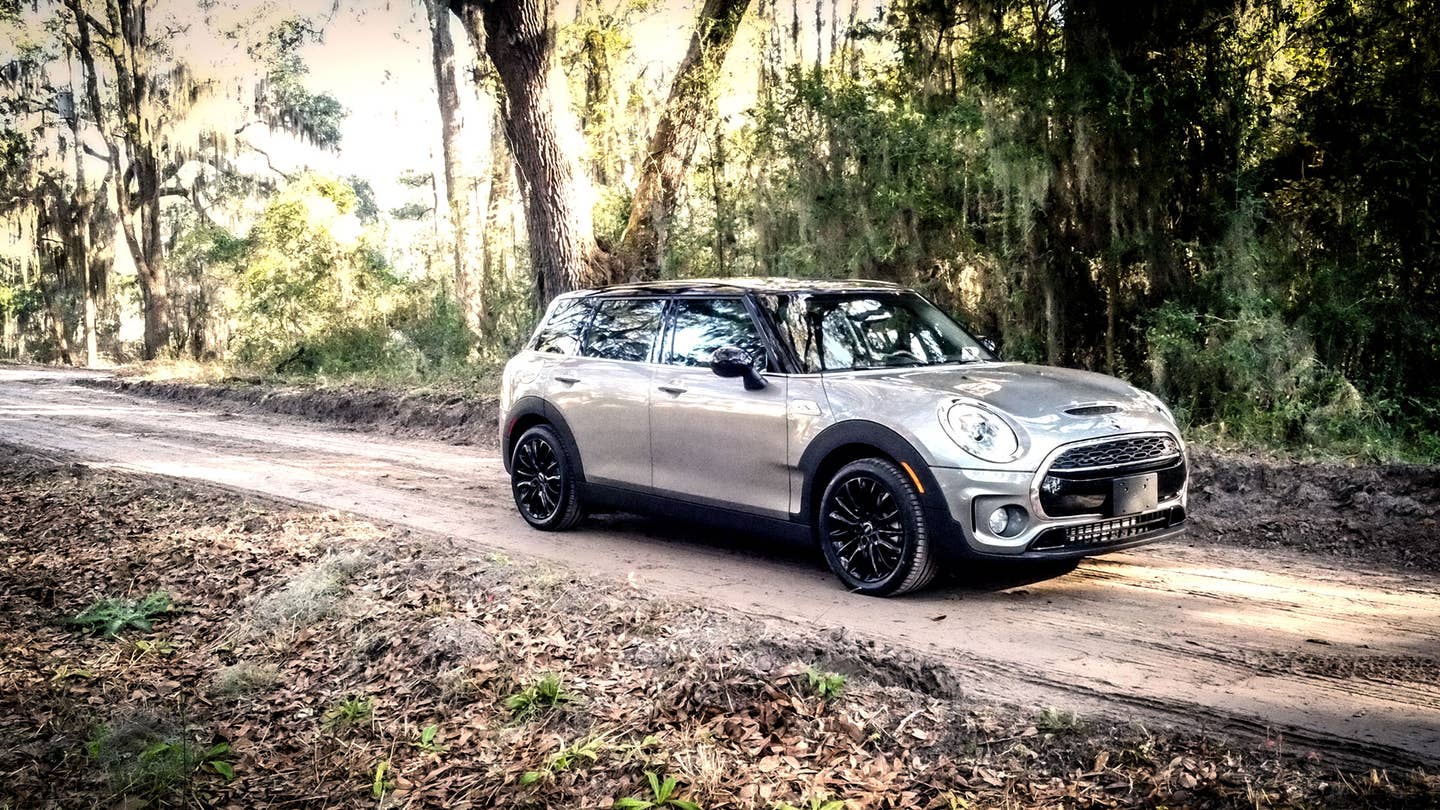 BMW owns Mini. Why would this matter in the tale of driving the newest Mini, the Clubman, which still has barn-style rear doors, but is otherwise not at all the same as the outgoing Clubman?

The quick and dirty: BMW would like to develop Mini into something like the Volkswagen analog to Audi. It might take time, but Mini needs to meet more buyer needs, and that means building bigger and selling wider, to take advantage of economies of scale. And so, both as a symbol of intent and as a literally bigger car, nothing says “flagship” like the largest Mini in the brand’s history.

Underneath its skin, this car, a half-foot longer than the current Countryman, is a lot more BMW than Mini. Its primary platform partner is the BMW X1. If you’re inclined to get the eight-speed autobox (rather than the superb six-speed manual), it’s nearly the same as the Aisin unit in the X1. And when we get an AWD version of the Clubman, which Europe gets first, it will almost surely be based on the X1’s transmission. The similarities don’t end there. Front legroom is identical to what that BMW offers; rear knee room is nearly the same as well. The Clubman maxes out at 48 cubic feet of cargo space, which is only a few cases of beer shy of the X1’s 56 cubes.

All this trickle-down results in a very roomy, extremely placid highway ride that should appeal to a broader buyer base than folks willing to put up with gen-1 Minis that, while amusing, could be overly darty on long-mile commutes.

Typically when brands grow, bosses play whack-a-mole with anything that might be characterized as “quirky.” Still, the sky is hardly falling for the Mini faithful. The enlarged Clubman is no larger than the current VW Golf, the most logical competitor in the segment. In fact, though the Clubman’s maximum cargo space still falls slightly shy of that VW’s, the rear seat quarters are roomier than those in the Golf.

Growing pains: The Cooper S Clubman weighs 3,235 lbs, nearly 500 more than a Cooper S Hardtop. Moreover, this is weight you feel, mostly in the form of not-there-yet acceleration. The base Cooper Clubman’s just a few Butterballs lighter than the S, and its dinky, 1.5-liter, 134-horsepower three-cylinder has to be wrung hard to huff its way to 60 mph in 8.9 seconds. That’s about a second “quicker” than in the 2016 Toyota Prius. Talk about damning with faint praise.

Its 189-hp 2-liter is a far better match to the entire Mini experience, which—if the “go-kart handling” credo of the brand is to be followed—is about bust-a-left-lane-move livin’, not miserly, carpool lane fuel-sipping. The head scratcher? How can the far heavier AWD BMW X1, with the same engine boosted to 240hp, get the identical 22 mpg city/32 mpg highway as the Cooper S Clubman? Next question: How hard would it be to mod your Cooper S to get 240hp?

Tabling that query, the answer is that, yes, having a 240-hp Mini Cooper Clubman JCW (the next logical branding play) is definitely doable on this chassis.

Because no matter how many parts carry over between the X1 and the Clubman, Mini engineers knew what not to screw up, and blessedly preserved quick steering feel and a suspension that—while gifted enough travel to soak up tax-starved, potholed roads—still firms up nicely when you lean the car hard through corners. Again, no hatch on the road is more similar in character than the Golf. And as with that platform, there’s plenty of room to hot-if-y the already toasty S Clubman.

The true test of Mini fealty comes with the wielded options sheet. Be imprudent, and you’ll be in Audi territory before you can say “Chesterfield” leather upholstery. Save your scratch. The cloth seats are both nicely bolstered and even stylish.

And the reality is even in close-to-base guise, Mini’s done good work updating without ditching the brand’s character. True, the car’s longer and wider, and in some colors it’ll work less well than others (like off-white; it’s sharpest in burgundy and a gun-metal gray). But you’d never eyeball the Clubman and think it’s anything other than a Mini. Same goes for driving the car. There’s superb pedal placement and a smooth, easy-to-operate six-speed gearbox. There’s a just-right steering wheel, and sight lines are nearly perfect, so you can feel the car’s dimensions in traffic and on winding roads.

Those qualities evade a lot of carmakers, but Mini has this part nailed—and dare we say, better than their bosses at BMW do.

Surprise! It’s still a Mini. Still fun, quick on its toes, just larger, quieter and more pragmatic. And, yes, more costly if you’re not careful. So if you get the S, as you should, spare most options save one: The $750 Black Star Spoke rims, which add a welcome dollop of menace. As is always true with black accessories, these exert a slimming effect that this now-maximized Mini pulls off—as it pulls off most everything else—well.