The Fiat Panda Is Everything Right About Italian Cars

Humble and homely, but it does exactly what you ask of it—within reason. 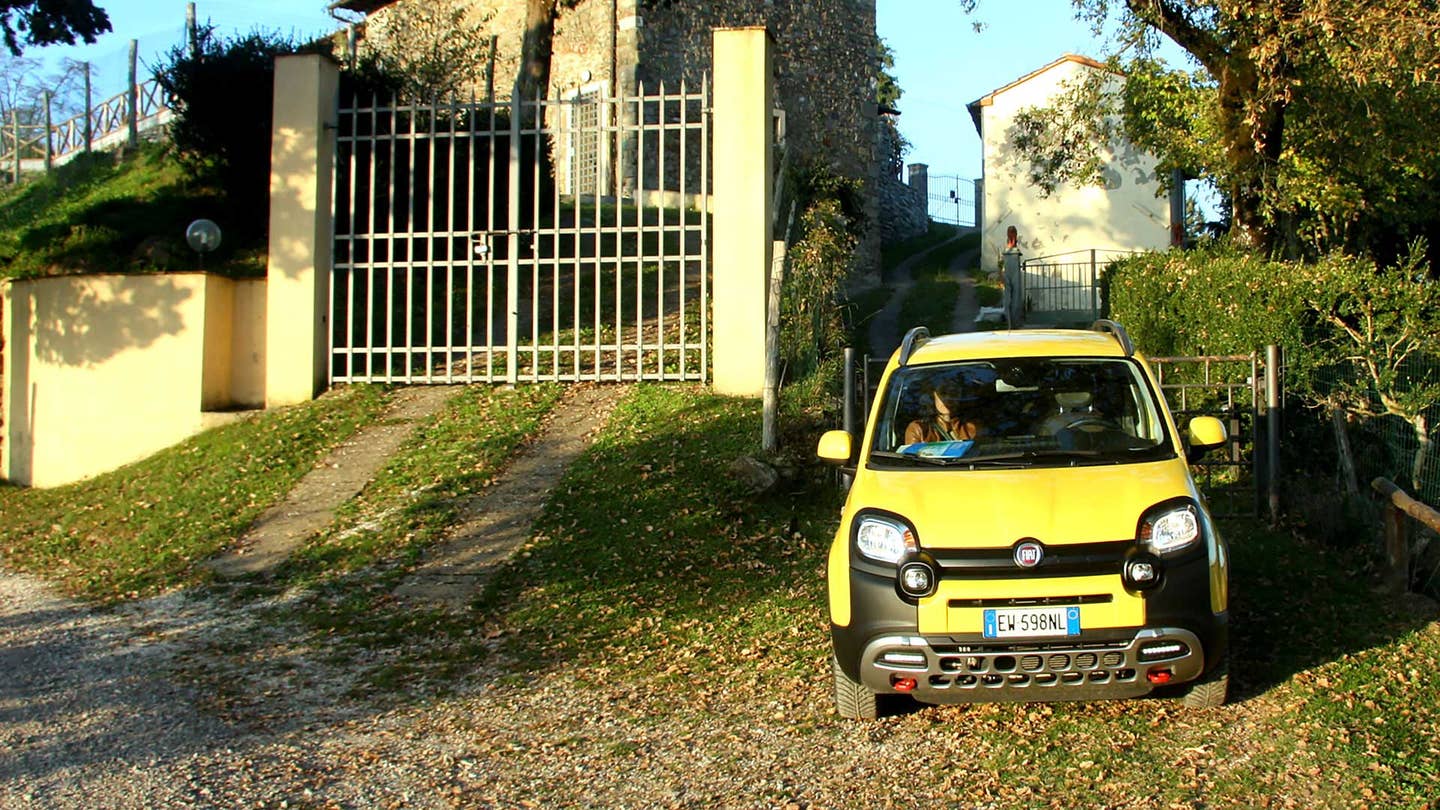 When the time came for my wife and I to take her mother on her first Italian viaggio, there was only one car I could think of to get us from the north to Rome in relative comfort, and without using too much of Italy's super-expensive benzina: the Fiat Panda.

The Panda is, by far, the best-selling car in Italy. It may look small and maybe even a little silly to American drivers, but I'm here to dispel these notions. The Panda is the greatest thing since sliced mozzarella (presuming the mozzarella has just been sliced).

The fully kitted version I had—a bright yellow, electronic four-wheel-drive Panda Cross with larger wheels and offroad lights—sells for the euro equivalent of about $22,000. But I’ve also driven the normal, rental-counter version, which, to be honest, isn’t much different. Like its more muscular-looking stable mate, the base model is a standard bearer for smart, Spartan simplicity, and starts at less than 13,000 euros.

It's little wonder that in a country where traffic chaos deepens the farther south you travel, and fuel runs more than $6 per gallon, the best-selling car is A.) cheap, B.) reasonably fuel-efficient and C.) easy to navigate through tight spaces.

My family's Fiat Panda adventure began in Milan, where I picked the car up at Malpensa airport. Naïvely, I had assumed that a five-seat car would be able to handle three people with luggage without much trouble. It would have been able to accommodate five of me, with five of me's luggage, just fine. But my mother-in-law—who happens to be very small—travels with three times her weight in luggage. The three of us, my bag and the ladies' steamer trunks all fit, with just enough space left over for a mother-in-law-size cubby in the back seat. Even packed to the gills, the Fiat didn't complain. It just motored out to meet the autostrada.

Around town, the turbocharged .9-liter TwinAir gasoline engine returned halfway decent fuel economy. Don't ask me for numbers because the kilometer-per-liter thing makes my brain hurt. But on the autostrada, the fuel gauge swept toward empty with the same alarming speed you'd see in a giant Seventies personal luxury sedan. Granted, the tank is small and I was going pretty fast, deep in triple-digit km/h territory. But the car buzzed along at 4,500 rpm all day like there was nothing amiss.

Night fell well as we left Tuscany, and as the roads emptied, another Fiat Panda pilota took off. I kept up with him for a short time as he utilized the entire width of the road, easily exceeding 100 mph as he drew lines worthy of a Formula 1 development driver. I'm pretty sure I saw him chuck his rearview mirror out the window. I felt a deepening squeeze on my forearm and saw my wife's white knuckles through the blackness of night. Slowing down to preserve my marriage, I watched the other Panda's tail lights dart left, right and disappear over a distant ridge.

The farther south we traveled, the more chaotic the traffic. The gridlock, noise and general I-don't-give-a-fuckery of metropolitan Rome are intense. People lay on their horns for a minimum of 10 seconds. I’m actually hearing verification every few seconds as I write this.

But that's where a couple of the Panda's other attributes come into play. It's small size makes it easy to thread through the smallest gaps available in medieval alleys, senseless traffic patterns and ad-hoc sidewalk parking spots. The horn is loud—proper, honking loud—and the car has just enough power to get up to speed and dominate the left lane, which, by dint of some miracle (or, possibly, centuries of domination by regulation-happy Northern regimes) is freed of traffic with the blink of a high beam.

Sure, Italy may have a few Ferrari stables here and there, but the wider habitat is better suited to a Panda.

Drive Wire: Fiat Hints at an Abarth Version of the 124 Spider