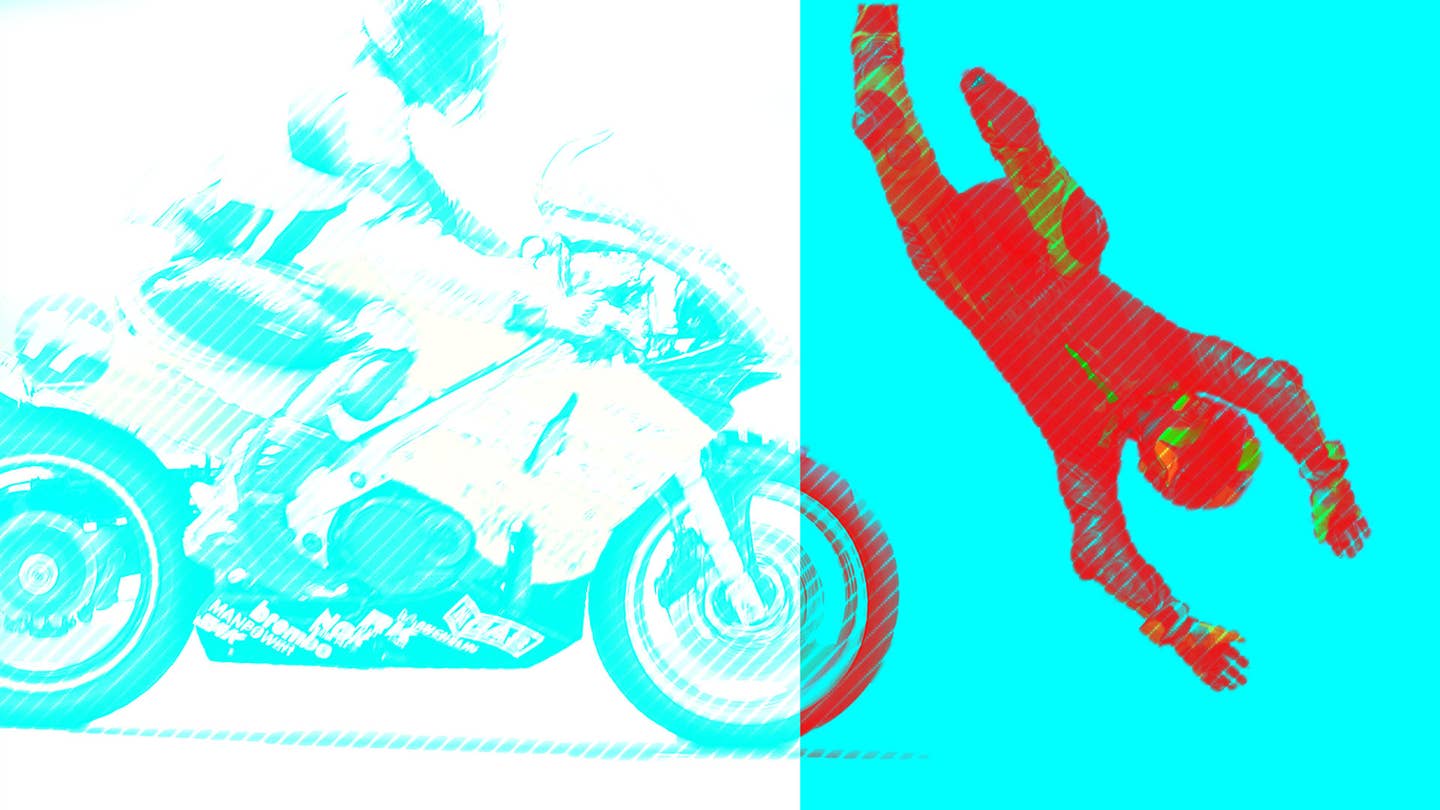 Nobody has any right to tell anyone else they can't ride a motorcycle. Right? But if you, like Drive Deputy Editor Josh Condon, are considering picking up a riding habit in your late 30s, you should at least have a decent sense of the potential consequences. I've been an EMT in Westchester County for nearly a decade, much of that time spent in the back of ambulances hunched over victims of motor vehicle accidents—a healthy (get it?) portion of which involved motorcycles. You probably know that riding a motorcycle is dangerous, and yet somehow I don't think you really, you know, know (looking at you, Condon).

So to hammer it home, here's a handy list of some of the hideous potential consequences of riding a motorcycle that keep me awake at night.

1. The pavement is a cheese grater

In my years of emergency services, I've seen it all. (Truthfully, I saw it all in the first 12 months. After that, it's been a set of repeating horrors.) The common theme of motorcycle accidents—and what really distinguishes them from motor vehicle accidents, or MVAs—is the fragility of exposed human flesh. Flesh and pavement are incompatible. If you've ever had even a touch of road rash, you have an inkling of what I'm talking about. You don’t need to be carrying a lot of speed to achieve devastating soft tissue trauma; I've seen riders going 25 mph wearing t-shirts have all the tissue stripped from their shoulder, right down to the bone. Then you have to factor this: Every particle of gravel, dirt, plastic, or loose penny on the road will find its way into your wounds and have to be picked out by the ER staff before they can begin to stitch you up. And that really sucks.

2. Falling down hurts more than you think it does. Seriously. Especially at 65 mph.

You, like every other able-bodied person on the planet, have tripped and fallen. But have you ever tripped on a sidewalk while walking 65 mph? When you fall off a motorcycle at 65, it can end one of three ways: 1.) Very little happens because you are head-to-toe in protective gear and nothing is around you; 2.) You get tossed around like a rag doll and subsequently experience an unworldly amount of pain; or 3.) You go into shock, feel no pain and…lights out. Here's the thing: The first scenario rarely happens. Humans were designed to fall at speeds of up to around 20 mph; when you triple that speed, it makes sense that things go south, fast.

3. Cars are extremely heavy, and the people who drive them are oblivious.

Are you Valentino Rossi riding around on a peaceful Saturday morning? Doesn't matter—all it takes is one moron liking an Instagram picture of a breakfast sandwich as they weave through a traffic light and Ciao, Vale. I can't count the time I've seen the results of a car drifting into a motorcycle's lane, or sideswiping a motorcycle, because they didn’t see them at all. In a car-versus-car scenario, it's not even an ambulance call—I don't respond to most fender-benders. But car-versus-motorcycle is my bread and butter, and those scenarios typically end with my rushing someone to a Level 1 trauma center.

The reasons seem obvious, but look at it this way: in a car-versus-motorcycle accident, the weight of the car redirects all that energy right into the bike—and its rider. It doesn't take much energy from a car traveling 40 mph to launch a rider literally halfway down a city block; it takes almost none to snap a human femur, the body's strongest bone. I see that all the time.

Who doesn't love a highway divider? Broadly speaking, they save a lot of lives. To a motorcycle rider, they're a mixed blessing. On one hand, they prevent cars from crossing lanes; on the other, they cause instant death. The two most prevalent types of dividers are jersey barriers and steel guardrails. In my experience patrolling the parkways of Westchester, the most common motorcycle accidents result in the rider skidding across the pavement until he loses momentum, or hits a fixed object at speed. That fixed object is often a highway divider. The injuries are significant. With steel guardrails, the rider often gets wrapped around the post, causing serious injury to either the back or the extremities. If he hits a jersey barrier, the rider is often pancaked between the concrete and the motorcycle skidding behind him. A 500-pound bike causes significant damage.

5. Animals are not your friends

Plenty of people have hit an animal while driving, be it a bird or a squirrel or even a deer. Fortunately, most people are protected from the collision by an IIHS safety-rated cabin that has more airbags and crumple zones than you can count. When you're on a motorcycle, it is just you and the animal, one-on-one. And that animal becomes a furry missile flying towards you at 60 mph. That's a lot of force being hurled at you without warning. If you come in contact with one of nature's creatures, there are a few ways it can go: 1.) You're hit by the animal and sustain significant blunt force trauma, like a tackle at 60 mph; or 2.) You run over the animal and likely lose control due to loss of traction. Even if you happen to avoid the animal, you still run the risk of dropping your bike if your evasive maneuver is too violent. No matter how you cut it, you never want to see an animal on the road.

When it comes down to it, what's a normal road hazard for an automobile quickly becomes a possibly deadly encounter when you're on a motorcycle. I'm not trying to convince you not to ride, Josh—go out and enjoy your flagging middle years. But you should know the stakes. And wear a helmet.

(Editor's Note: Max Goldberg was until very recently an assistant editor at The Drive. —JC)