2019 Harley-Davidson FXDR 114: The Muscular New Top of the Softail Range

This pricey cruiser is the closest thing we’ve gotten so far to a V-Rod replacement. 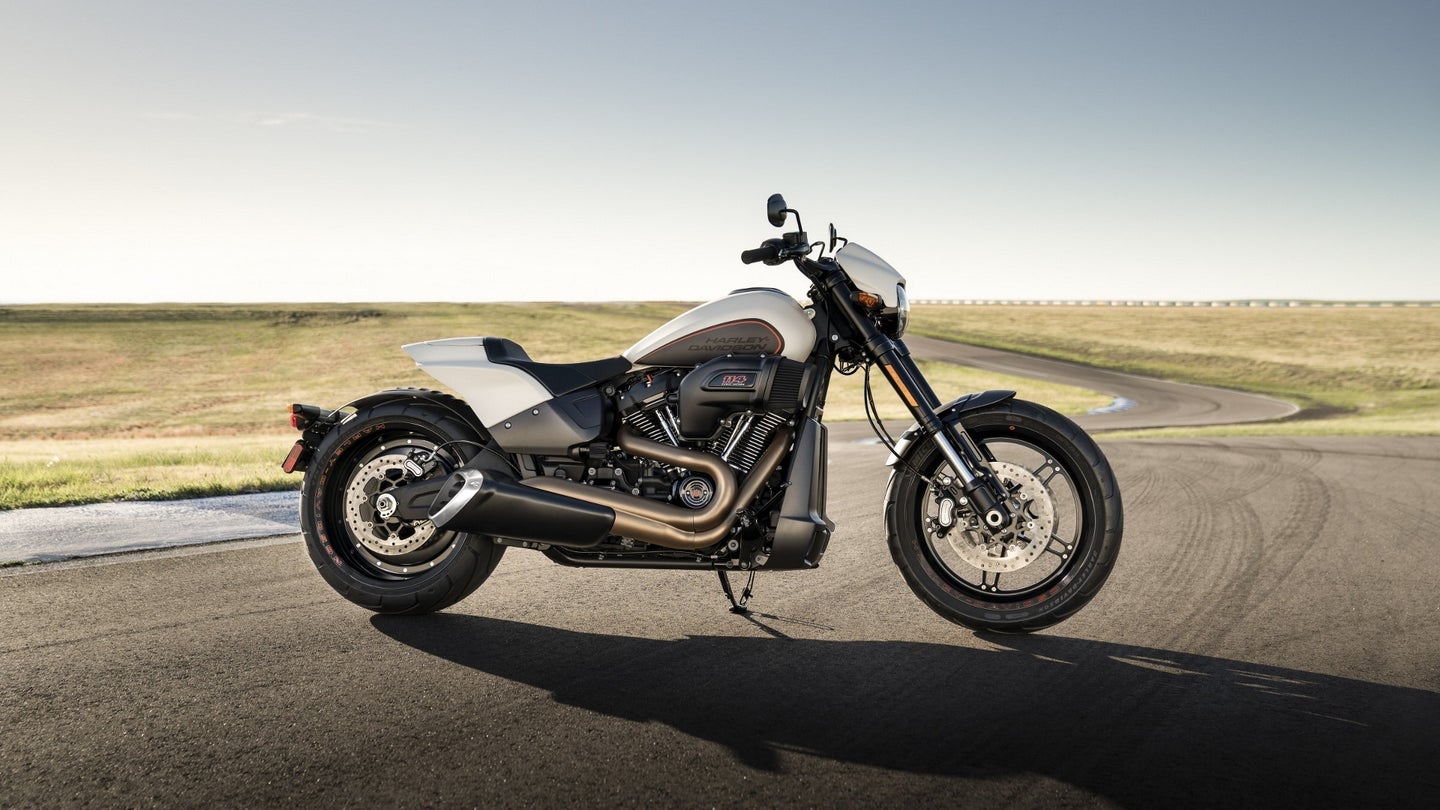 Topline: Harley-Davidson’s ever-changing Softail lineup has a new top dog with the muscular FXDR sitting at the top of the price range and starting at $21,349. That makes it the only Softail that you can’t spend less than $20,000 on. Harley-Davidson's newest offering is another bike that you can't get anything quite like from its chief domestic competitor, Indian Motorcycle.

What’s New: This is an all-new model that is reminiscent of the recently discontinued V-Rod. The V-Rod was touted as a muscle bike with strong performance from its model-exclusive Revolution V-twin engine. The FXDR is powered by the Milwaukee-Eight 114 V-twin which makes 119 pound-feet of torque and an estimated 100 horsepower (Harley-Davidson won’t release official hp figures).

Harley-Davidson also added lightness—something H-D isn’t exactly known for—to this Softail by using alloy and composite components like an aluminum swingarm and subframe. The bike tips the scales at 637 pounds which, by Harley standards, is pretty skinny. A few other upgrades include two-into-one exhaust, an inverted single-cartridge fork, an easily adjustable performance rear monoshock, a cool new drag bike-inspired air intake and some nice modern tech like LED lighting, a digital riser gauge,, and keyless ignition.

Naturally, being a Harley-Davidson, this “power cruiser” has countless customization options both aesthetically and mechanically with Screamin’ Eagle performance parts.

Quotable: “This motorcycle is really a blast to ride,” said David Latz, lead product manager at Harley-Davidson in a press release. “The FXDR 114 surrounds the very capable Softail chassis with Milwaukee-Eight 114 power, premium front and rear suspension and a host of new weight-saving components and materials. This is a power cruiser that delivers exceptional ride and handling characteristics.”

“The look of the FXDR 114 expresses its performance potential and highlights the technical features that set it apart from the rest of the Softail line-up,” said H-D Vice President of Styling and Design Brad Richards in the same release. “The drag-bike influence is strong with the raked and inverted front end, massive intake and exhaust, proportional contrast between the wheels, and the clipped tail section. But we made sure that purely technical elements like the aluminum swingarm, fully integrated digital instrumentation within the rider controls, and exposed external suspension adjuster are highlighted as well and help define this bike’s mission, which is pure performance, not just straight-line performance.”

What You Need to Know: Whether or not Harley-Davidson needed another big, expensive cruiser in its lineup is debatable, but H-D deserves some credit for introducing something a bit outside of its comfort zone. Aesthetically, this bike is a step in the right direction by having an identifiable Harley-Davidson design while looking thoroughly modern. It would just be nice if we could get a bike that looks like this from Harley for less than the cost of a Ducati Panigale V4.

At first glance, the FXDR seems similar to the Yamaha Vmax, a crazy, muscular, V-4-powered cruiser that makes 197 horsepower and 123 pound-feet of torque for just $17,999. Granted, the two are pretty different bikes, but they’re loosely in the same segment and the Yamaha undoubtedly gives you more performance (on paper, at least) for your dollar.

Perhaps a more comparable machine is the Ducati XDiavel, a premium cruiser with a Testastretta 1262 V-twin that makes 152 horsepower and 93 pound-feet of torque for $20,495. A few nice standard features of the XDiavel include Bosch cornering ABS, cruise control and Ducati Power Launch.

If you miss the V-Rod and you want a Harley-Davidson that’s pure Harley, but can still perform in the corners and not just in a straight line, then the new FXDR might be up your alley—if you have the budget for it.

H-D is counting on more than just a few new bikes to turn itself around.