Neiko's Master Impact Set Review: It's Better Than You Might Expect 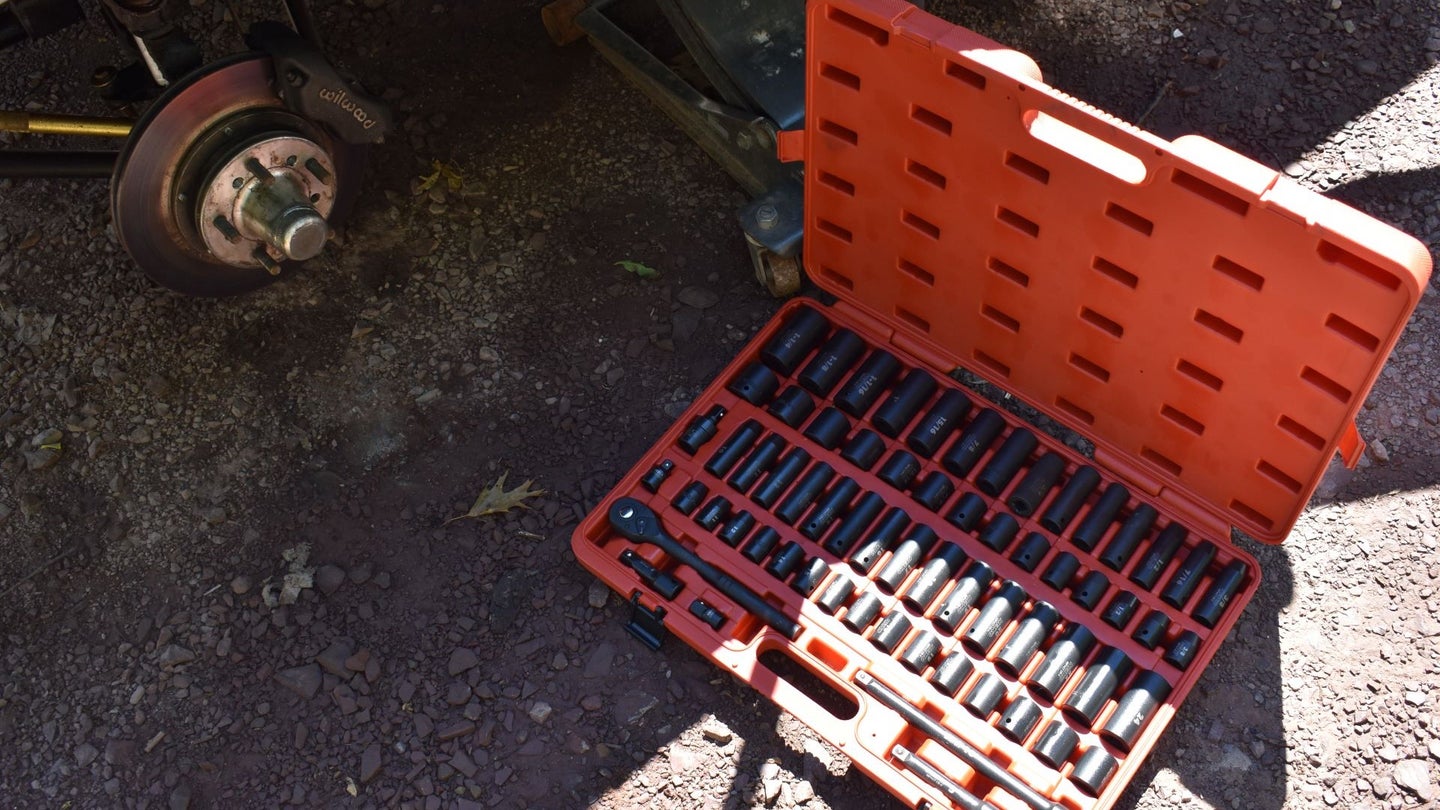 Even the fabled John Henry would’ve struggled to keep up with modern impact tools. Sorry, John, but monstrosities like Milwaukee’s M18 Fuel High-torque Impact Wrench are light-years beyond what the human body can do. So, even if your chrome sockets can withstand the power your sick pythons bring to the table, they just aren’t a match for electric or pneumatic power.

To match such phenomenal cosmic power, you need to match power with strength in your impact’s attachments. My point is that you’ll want to invest in a set of quality impact sockets. We get it, though. That expense tacked onto your new power tool takes a big chunk out of your project-car funds. Even if you’re buying the latest and greatest impact wrench, you might try and save a little on your sockets.

When you have 1,400 foot-pounds of torque in your hands, it’s not so easy to trust low-dollar brands. Everyone and their mother has heard of low-dollar and even some high-dollar impact sockets failing. Luck is not universal. And with something like the Neiko 02448A Half-Inch Drive 65-Piece Master Impact Socket Set, you might not know what to expect, especially since the brand seems to have no presence outside of Amazon.

I’ve heard good things about Neiko, that it seemingly excels at offering quality tools at low prices. Still, there’s only one way to find out. The Drive is putting Neiko’s impact socket set to the test so that you know a little more about what saving a few bucks on an impact set will get you.

This set is a monster. It measures 24 inches across and, according to Amazon, weighs in at 35 pounds! That means lugging this kit around isn't just a task in itself; it’s downright impossible in many situations. However, this is a master kit, and the case is designed with storage in mind rather than portability. That means I can’t dock any points for its size.

After wrestling the set free from the shipping package, the blow-molded case is finished in a matte color, with crisp print, detailed imagery, and easy-to-read specs. The experience definitely helps you to feel as though this isn't just another budget tool set.

The blow-molded case, as always, leaves a lot to be desired. While I didn't find any manufacturing defects to complain about, the fact that the sockets aren't firmly held in place is the first thing I noticed. Unless you want a mess on your hands, however, make sure the Neiko name is facing you when you open it. It helps that the orientation of the latches kept me from making that mistake. If even I'm smart enough to avoid it, you’ll be in good shape.

What's inside this kit is better than I expected from such an affordable collection. The first detail that jumped out is that each socket has large laser-etched size inscriptions. Upon closer investigation, their sizing is stamped into the socket, too, giving you the benefits of both laser etching and a more permanent solution. Neiko even took the time to educate folks in that the 3/4-inch and 19-mm sockets are the same by featuring both sizes on either socket.

The collection of socket sizes is solid as well, with a decent range of both SAE and metric sizes in shallow and deep-well configurations. Altogether, you get a total of 28 SAE sockets ranging from 3/8 inch to 1 1/4 inch, and 30 metric sockets ranging from 10 mm to 24 mm. Both sets are made up of deep-well and shallow configurations. The metric sockets are on the smaller side, with the largest at 24 mm, so some mechanics will need to invest a few additions.

While sockets are the main focus here, that's not all you get. Neiko throws in a total of three extensions, two adapters, one universal joint, and a half-inch ratchet. Although that ratchet is nothing revolutionary, I still was excited about it. This meant I needed to put this set through quite a bit of work to get a good feel for it.

Getting After It With the Neiko Impact Set

I do have plenty of work to do, but no current job requires the extensive use of impact tools, so I decided to use the Neiko impact set for a variety of odd tasks. Some of the work I subjected the set to included tearing down a Chrysler RB engine short block, removing the wheels and tires from my 1969 Dodge Charger project car on multiple occasions, and using that half-inch ratchet alongside the Craftsman 40-piece set to replace the shock absorbers on the Charger’s four corners.

Taking rides on both pneumatic and electric impact wrenches posed no issues, and that’s something I didn’t expect. I had no issues with fitment of the hardware, and I can’t see any sign of wear on the sockets. Even the laser etching seemed to have held up just fine. That might not be the case with more demanding tasks, but I have seen cheap laser etching take a hike after less work.

I also took the time to see how these sockets stack up to the dirt-cheap impact sockets I’ve put to work for years. Breaking out the dial caliper, I took some measurements of the 1 13/16-inch socket Neiko ships out and compared them to what I found on the same socket from my inexpensive Pittsburgh set. As I expected after use, they are close, but the Neiko is slightly less buff.

I have no complaints about the ratchet in this set. It’s pretty standard when compared to any other half-inch ratchet, though it does feature a black-phosphate finish to match the sockets. It handled fine, and I enjoyed the fact that it’s paired with a 72-tooth mechanism.

I had no issues with sockets falling off as long as the side hole of the socket was lined up with the retention ball. However, as with the sockets, I did take an anatomical look at the ratchet to see how it works and determine whether it will hold up over the years. While it’s a tried and true system, I can’t say I favor the twin-pawl mechanism for the kind of work I think this ratchet should be able to handle.

There’s plenty to like about this set, chiefly that you have quite a bit to work with. In my situation, I found that Neiko’s set included all but one size I needed: a 15/16-inch socket for my Pitman arm nut. The standard SAE sizes range from 1 1/4 inch all the way down to 3/8 inch, which is great, but I can’t see using a half-inch impact on anything smaller than 9/16-inch heads. I suppose that’s what the ratchet’s for.

Speaking of which, it’s nice that Neiko throws in a good selection of attachments and a ratchet. I didn’t have much use for anything other than the ratchet, but knowing you have adapters, extensions, and that universal joint to get you out of a pinch is a nice touch.

I also think it’s great that Neiko paired each of these sockets with engravings and laser etching. You’re never forced to squint your way through selection, and you don’t have to worry about having to guess what sizes you’re working with.

One can argue that the Neiko’s slightly less-meaty walls compromise the sockets’ strength, but I think the difference between the two is negligible.

I know there aren’t many ways to work around it from a production standpoint, but that massive case isn’t doing you any favors. It measures 24 inches wide and 17 inches from front to back. That’s going to take up a considerable amount of room in your storage cabinet. Add the heft, and woof, this thing is a monster.

While the selection of SAE sizes this set offers is solid, the limited range of metric sockets is something to note. It ranges from 10 mm to 24 mm without skipping any sizes, which is great. However, I can guarantee you’ll need to get some larger sizes once you start trying to remove constant-velocity (CV) axles. You’ll want to use the impact wrench for that.

I’m also not crazy about the twin-pawl mechanism featured in the ratchet. I know that an impact gun will be doing most of the heavy lifting here, but the lack of contact with the drive gear might be an issue when you start cranking on this thing. I didn’t have any issues with it when dealing with stubborn shock mounts, but it is something users will want to be aware of.

Lastly and possibly most important of my issues: There’s no lifetime warranty, and that’s pretty standard for hand tools these days. There’s also no mention on the packaging of the 30-day warranty these tools do come with. You’ll need to dig into Amazon or the company’s site to find that. That short warranty alone is enough to turn many folks away.

Our Verdict on Neiko’s Master Set

I think this is a good set to add to any home garage, although you might need to hunt down an additional socket or two. That’s about what I’d expect of any socket set, though. After all, buying a kit to cover every possible application would likely double or triple the price.

Speaking of price, I think this set is damn reasonable. Sure, it’s nearing the $200 mark, but I’ve seen similar kits from names you wouldn’t find on a tool truck going for roughly double that. Considering I can’t find much to dislike about the tools themselves, Neiko’s Master Impact Socket Set is a good route to take if you’re working with a relatively tight budget. 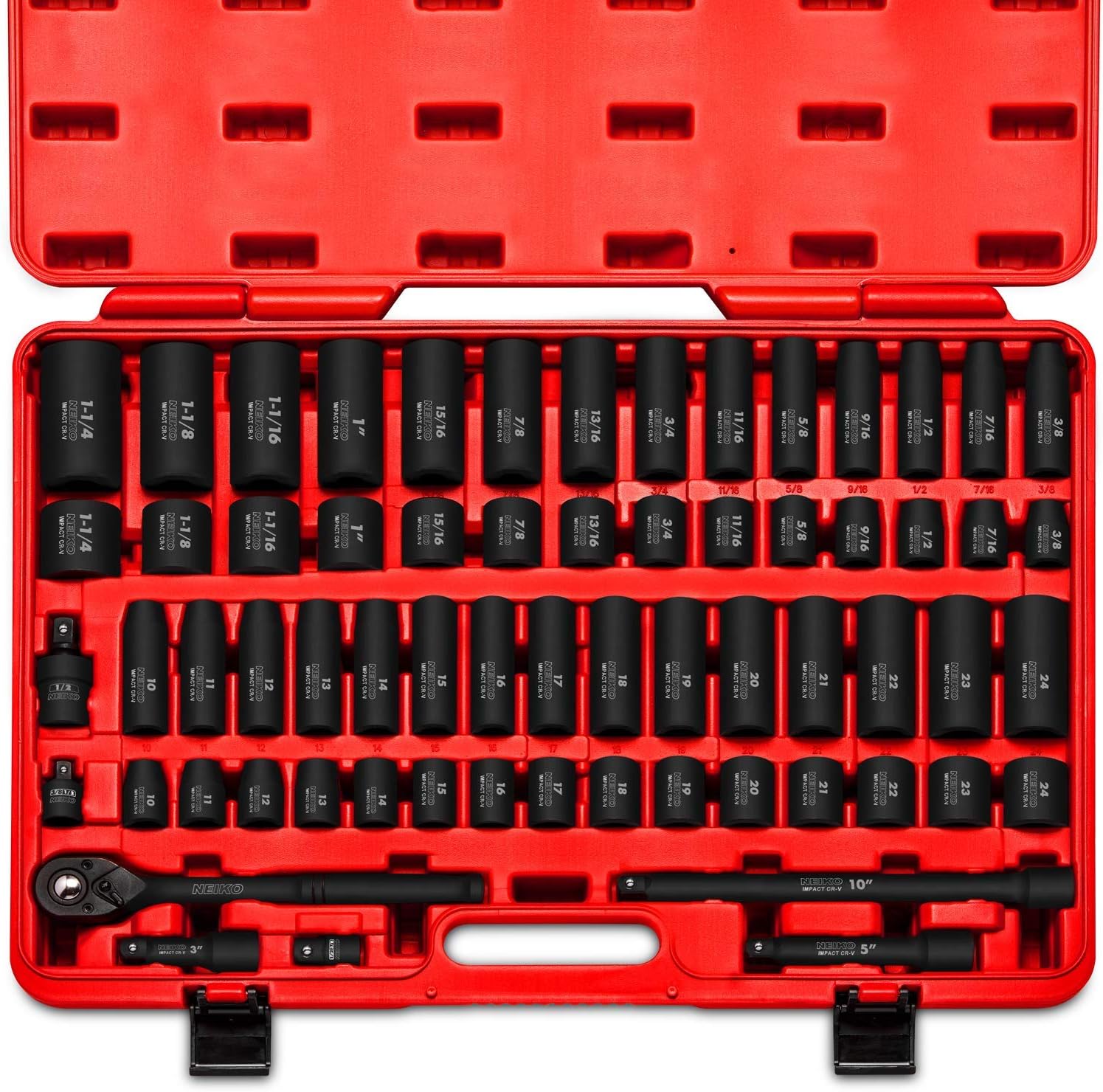 Neiko’s Master Impact Socket Set is a good route to take if you’re working with a relatively tight budget.

Q. Do Neiko tools come with a lifetime warranty?

A. No, Neiko pairs most of its tools with a 30-day warranty and its pro tools with a one-year warranty. You’re bound to take a hit one way or another when dealing with affordable tools and warranties.

Q. Are Neiko sockets any good?

A. The sockets in this set are pretty decent for the price. I can’t find any major defects, nor did I run into any issues while working. Although I can’t speak for the rest of the tools Neiko has to offer, they appear to be consistent in producing tools of respectable quality.

Q. Where are Neiko tools made?

A. Like many other hand tools these days, this set is made in Taiwan. Neiko is a Chinese manufacturing company, and all production is held overseas. Even if that will steer away many, there’s no denying that the quality of Neiko tools is far better than what many would expect.

The Drive's Gear section is our brand-new baby, and we want it to grow. For clarity on our process, we want you, our dear readers, to know that the products we review arrive from a variety of sources, including those we purchase ourselves and those we receive from manufacturers. No matter the source, we maintain our editorial independence and will always give you our honest assessment of any product we test.

We’re here to be expert guides in everything How To and product related. Use us, compliment us, yell at us. Comment below, and let’s talk, y’all. You can also shout at us on Twitter or Instagram. You can also reach us at guidesandgear@thedrive.com.