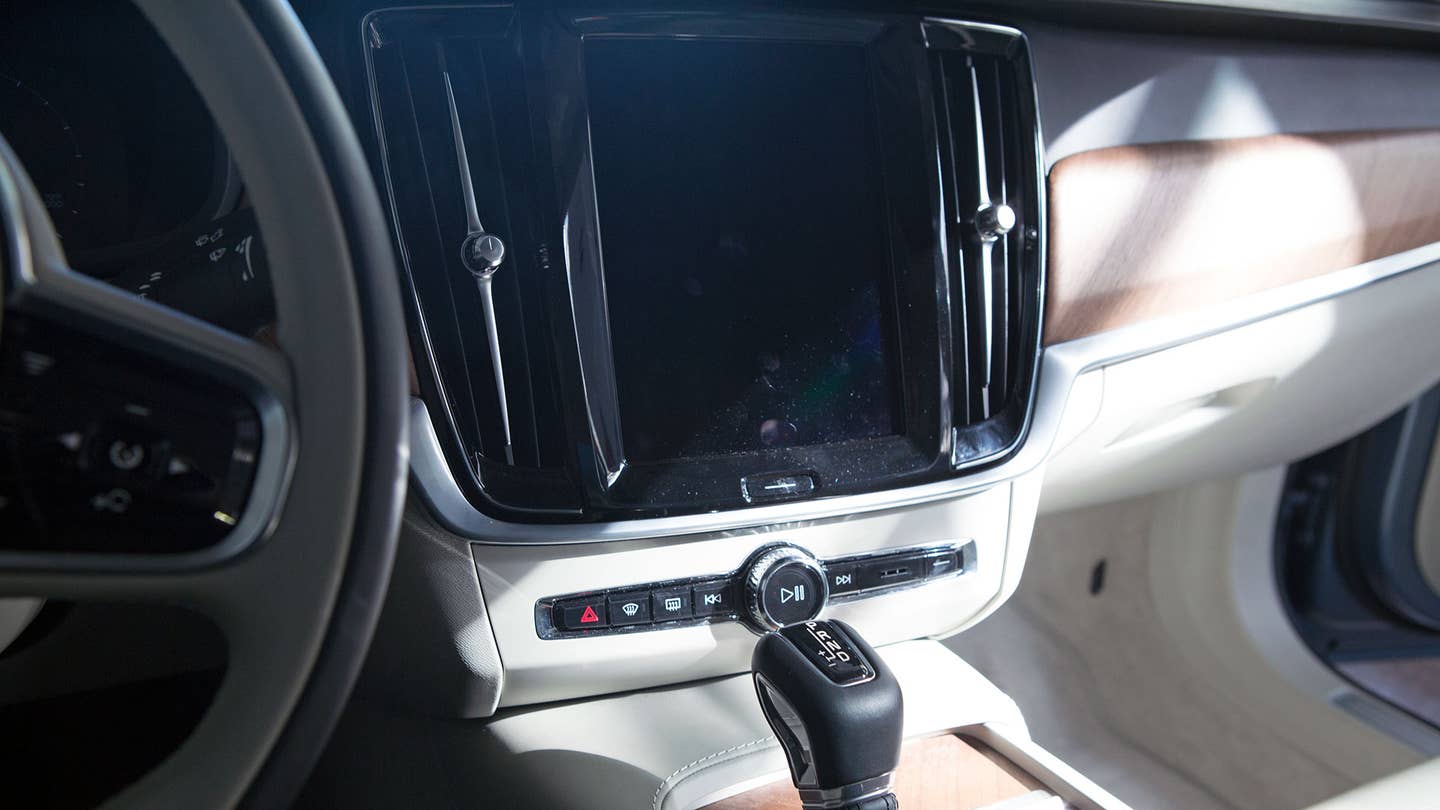 In high school, I had an artistic friend—now, a real artist—who once saw a sunset and said, "I have to paint that sky." So overwhelmed was he by the color and contour of the clouds that he put a busy adolescent life on hold to sit cross-legged on the grass and splash pigment on a page. Cut to present day: a large car-carrier idles on Brooklyn's ocean-adjacent Second Avenue, ramp unfurled, and births a Mussel Blue Metallic Volvo S90. It's my job to steer Volvo's newest sedan and second coming of its new self 11 feet onto a hydraulic lift, and into The Drive's showroom. I slid into a highly-contoured, though colorless, seat, dragged a thumb across a swath of "Linear Walnut" and said, "I have to photograph this interior." The navigation system, alert, responded, "Destination. not. found." Onward.

I'm not a photographer. My work here is words, not pictures, but I wanted to be the conduit between the delicious surfaces of the new S90 and the Internet. Me, Prometheus, bringing Flame (Birch Inlays) to the people. Our video producer kindly lent me a wrist-straining Canon D5, mandated I use manual focus and sent me off.

The interior is near flawless. Somehow, it gives dual impressions of slenderness and heartiness—no easy feat. The door pulls are shiny, mobius strip-like pieces that outclass the standard luxury-car chrome "L"—even Land Rover's chunky interior latches. The headrests, as sculptural and whiplash-reducing as every other Volvo piece since the early Nineties, have been slimmed down. The matte-finish walnut is thinly sliced, but resonates like a good bookshelf when rapped. Nothing moves with the heaviness of Bentley's interior piece, instead it glides serenely. It's graceful stuff.

Before you delve into the gallery, a spotter's guide to the interior of the our loaner Volvo S90. The car is a top-level "Inscription" model, which adds ventilated leather, that striated wood, a full-leather dashboard, "dynamic" seats with extendable cushions and a cooled glovebox that disappointingly does not come stocked with Aquavit. The optional Bowers and Wilkins audio system is included, with its special, dash-mounted "tweeter." The pulls in the air vents are a gloriously-patterned metal that matches the little ignition fob. The huge center command screen gives off Tesla vibes, though without turning things up to Straight Nerd. Quibbles? There's a lot of shiny black plastic that attracts dust like a basement treadmill, and the "Blonde" leather and carpets seem vulnerable to the muddy Danskos and wet Retrievers Volvo-drivers love.

But alone in our showroom, with a wan morning light nipping into each of the perforations of the Volvo's leather, that messy world was far off.