What’s The Cheapest Fix You Ever Made To Your Car?

Duct tape, thumbtacks, heavy-duty staples, and ‘The Armor Of God’, otherwise called duct tape, are worth every penny on a cheap ass car. But can you really put enough lipstick on a rolling pig? 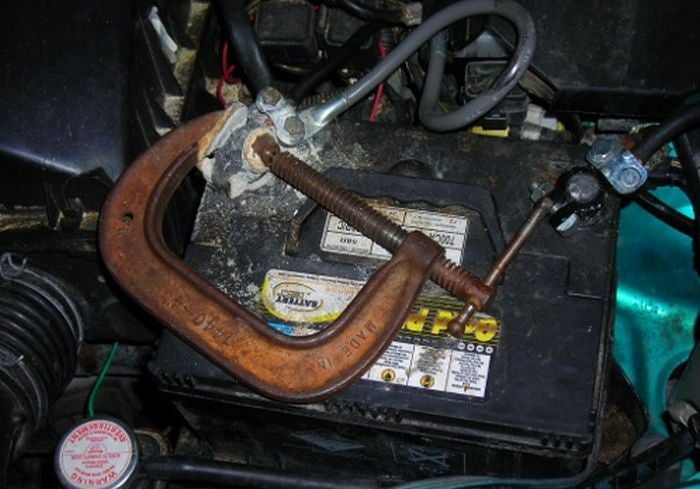 Ugliest damn repo I ever got was this one.

In case you haven't figured it out, this isn't a redneck NASCAR version of a minivan. That duct taped window? It was the only pretty part of a vehicle that was as rough as a wore out mop.

You had to look real deep to find the true core of its ugliness. It turned out that straps had been tightened in a criss-cross fashion to serve as lugnuts for one of the wheels.

That level of cheap and ugly can kill you. I drove that 13-year-old minivan for nearly 40 miles to my mechanic shop, and then when the plastic wheel cover was removed, the straps were plain to see in their tattered glory and all the blood rushed rushed right out of my head.

I had done some weird shit earlier in my life when it came to cheap fixes. The first junk car I ever had was a 1983 Lincoln Mark VI that was DOA on my girlfriend's driveway. I cut out the passenger side carpet because battery acid had leaked onto it, and replaced it with a light red bathmat that was nearly the same color as the rest of the burgundy interior, Heavy duty staples and thumbtacks held the ribboned headliner together and duct tape served as the equivalent of plastic screws for the door panels. You can be read about it here.

I have done plenty of other cheap stuff. From replacing old tires on a 1990s Plymouth minivan with a matching set I found at a dollar thrift store (they were $20), to recycling fluids on parts cars that were still perfectly fine. I have even used a large wooden spoon to keep the seatback on an old Buick Riviera intact that was headed straight to a wholesale auction.

Sometimes it pays to be creative with limited resources. How about you? Have you ever concocted a fix on a car that was 99 cents short of a dollar?