The Domino Effect Of The Atlanta Highway Collapse

How the destruction of a 100-foot segment of Interstate 85 in Atlanta will impact cars, railroads, air travel, and interstate commerce nationwide. 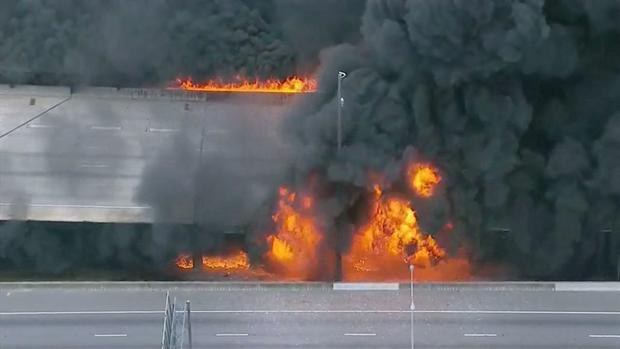 Can the collapse of one hundred feet of interstate impact an entire country?

Yes. This is how it happens.

Every region of the United States has its heart of activity. For example, New York City is the heart of a tri-state area with well over 20 million people in it and one interstate, Interstate 95, provides a healthy bulk of the goods and services New Yorkers and their surrounding residents need to function.

When that interstate ceases to flow, everything around it has to deal with the massive diversion of the cars, trucks, railroads, airports, and bridges that are all interlinked to that one stretch of interstate.

Atlanta just lost the use of that one critical interstate that makes the difference between strong economic activity and perpetual gridlock.

When one hundred feet of elevated pavement collapsed within five miles of the city of Atlanta, it set off a domino effect that will have consequences for nearly everyone who flies, drives, or consumes anything that must be transported between the largest transportation hub in the Southeast and the rest of the country.

Atlanta's Hartsfield-Jackson International Airport is the largest airport in the entire world. As all roads led to Rome, Atlanta's airport serves as the avionic hub of a massive amount of domestic and international travel, with well over 87 million people flying into the airport each year. That's more than Los Angeles International Airport, and New York's Laguardia or JFK airports. And even Hartsfield is a small artery of a much larger heart of activity that runs through Interstate 85.

When it comes to the transport of goods and services, I-85 is a far more important than the world's largest airport. Atlanta is now home to more than 75 Class A scheduled motor carriers, as well as more than 2,000 commodity carriers, contract haulers, and irregular intrastate route carriers. The largest airport in the entire world represents less than 1% of metro-Atlanta's GDP. Nearly all of that GDP is the result of the railroads, trucks, and automobiles that pass through Atlanta's main transportation infrastructure at some point during the year.

To compare the importance of Interstate 85 to the largest airport in the world, is like comparing the military strength of NATO to the island fortifications of Crete.

When I-85 collapsed in Atlanta, millions of tons of goods had to be diverted to other interstates and major roads that simply can't handle that additional load. It gets worse. Over 250,000 passenger cars daily use the 100 feet of roadway that just collapsed, that's more than the daily population of Atlanta's airport. They now need another way of getting from north to south.

What's there to replace it? Well, it's pretty much a glass half-empty / glass already cracked and leaking scenario. They can eventually use the half of the interstate that didn't collapse. But even when that healthy half of Interstate 85 is able to flow, that traffic will be a trickle at best, and probably limited exclusively to state government vehicles during the reconstruction.

So here's what you should expect as the outcome of 100 feet of collapsed interstate that may be thousands of mile away. We'll start with the local events and expand right to your hometown.

This will last for a few days and the daily hell of traffic will be an Atlanta-only situation. Then it will start effecting you—ever so slightly.

To make all this traffic work, the railroads and trucking companies will have to cooperate with the state Department of Transportation because everyone else will simply do whatever the hell they want. If Atlantans are lucky, and we rarely are when it comes to traffic, the Atlanta Braves will leave town for a while. Since those two interstates intersect at the exact point where the brand new Suntrust Stadium is located.

More than likely, Major League Baseball tells Atlanta and the Braves to deal with it. Then you can pretty much forget about those interstates getting any of those goods and materials to where they need to go in a timely manner.

Is it possible to unscrew a clusterscrew? Atlanta already had the worst traffic in the United States, but now it's going to get real interesting for everyone else. Even those of you who never liked baseball in the first place.