What Was The First Used Car You Bought?

It’s one thing to get a car from a family member or a friend. It’s quite another thing when you buy it yourself. 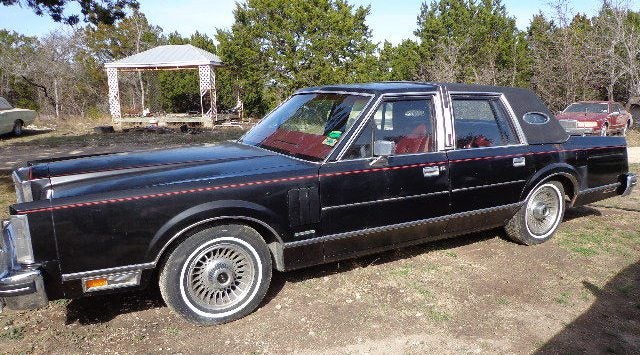 She was DOA on my girlfriend's front lawn.

The 1983 Lincoln Mark VI four door sedan had been sitting at my girlfriend's house for two years. Imagine this old Lincoln with faded paint and two thousand scratches.  Now add four flattish tires and two cats sunbathing on the hood. That was the car, which was likely worth more in parts than as a whole car.

Who owned it? Well the title was still in the Mom's name. But it was definitely owned by her mom's cats. Felines have a unique way of marking their territory, and this one had all the unique scratches and smells that would make it a spacious home for those with four legs. Humans need not apply unless they had no choice.

For the unfortunate souls that would inherit it, the aptly named Steenkin' Lincoln would be one hell of a rolling smell. My then girlfriend and I tried carpet cleaner, Lysol, Ammonia, baking powder, stink bombs, potpourri, incense,and this was all before we had propped the headliner and seats with duct tape, thumbtacks, and heavy duty staples. Finally we just ripped out the carpet, put in bathroom floormats, and called it good.

It was free. We were broke. Gas was cheap. And it lasted three years. The day her mom transferred the title to her was the day it died. But before that unique blessed day, the Steenkin' Lincoln offered one Hail Mary of hope to a young couple from North Georgia. For us it was either bringing back old school Detroit metal or...

Buying an old car at a nearby public auto auction which, more than likely, was worth more to a junkyard than to a young couple looking for automotive salvation. The Steenkin' Lincoln was as ugly as Jimmy Swaggart's sins, but it was reliable and through the grace of cheap parts and forty-nine cent motor oil,  it gave us the one break we needed to get a good cheap used car. Something that didn't smell like wet carpet and cats.

You see, back in the 1990s there was only one place you could go to find a good car. The newspaper. And not just the classifieds, you had to look at the "$2000 And Under" section. From there you would find an ad that used acronyms and hieroglyphics to help the seller avoid paying $99 for ten whole words.

The ad for the 1986 Toyota Camry she wanted to look at was barely an ad.

That was it. You wanted more details? You called the number and hoped that you weren't calling a dealer in drag. Lucky for us, the seller turned out to be a nouveau riche doctor from Emory University who had already bought himself a new Toyota Camry. His last words to me before I took the thirty-minute drive to see the car were,

I'll have it ready for you when you get here.

And it was, in fact the car had been running for what must have been at least twenty-nine minutes before I arrived. Dead battery. No license plate. Sigh!

We made our introductions, and as soon as I turned left I heard an immediate sound of ocean from somewhere in the back. The only problem was that Atlanta is located about six and a half hours away from an actual ocean. The trunk had water. A lot of it. Still, that didn't stop a guy with $1500 in cash and a lot of free time that evening from taking this water retaining steel car-boat on the highway.

Within 200 feet of merging on the Interstate, I saw big blue flashing lights and what could only be described as a siren of death. I pulled over with a sloshing sound in the back along with what I swore were raindrops on my neck. I then stared at a face that seemed to take up the whole driver window.

This guy, turned out to be a jerk. The type that can't stop himself from rolling his eyes and saying "Here!" to a police officer on the first cold day of the year as he handed him his driver license. I was wearing shorts and within ten minutes of the officer discovering that the car had no insurance, there was a tow truck that picked up the Camry and scampered off.

We had no car. Not even an offer of a lift and this happened before cell phones became a reality for the many. I was royally pissed, but somehow, I did something then that I probably wouldn't do now.

I told him that my wife was only about a mile and a half  away, and that I would drop him off at home after we picked up her car. My wife was working as a production assistant at a religious interfaith station called Atlanta Interfaith Broadcasting. They had three simple rules for every religious group that wanted to be on the air. You couldn't proselytize. You couldn't ask for funds. And most importantly, you couldn't put down another religion.

That helped eliminate 99% of the wackos and made my wife's life a good one. Fred, a genuinely nice homeless guy who I hope is living the good life now, opened the front door and said, "Jesus loves you!". I thanked him and gave him a buck, kissed the girl I would later marry, and drove off in the Steenkin' Lincoln.

The car still had no air conditioning, and it wasn't 10 seconds later that this fellow wasn't pressing a slew of buttons on the door to lower a window. Thankfully, one still worked. After about five minutes of light talk he uttered the words that would change our lives.

"I'll sell it to you for five hundred bucks if you get it out of impound."

And that was it. I paid him $500, and after carrying a car battery to the impound lot with ninety-two dollars in my pancake flat wallet, I drove off with very my first used car that I managed to buy myself.  That 1986 Toyota Camry was a rock at 134k. After it hit the 200k we sold it to a pothead for $1800 who conveniently never titled the car. Even after we helped her get it out of the impound lot... twice.

That's my story. What's yours?