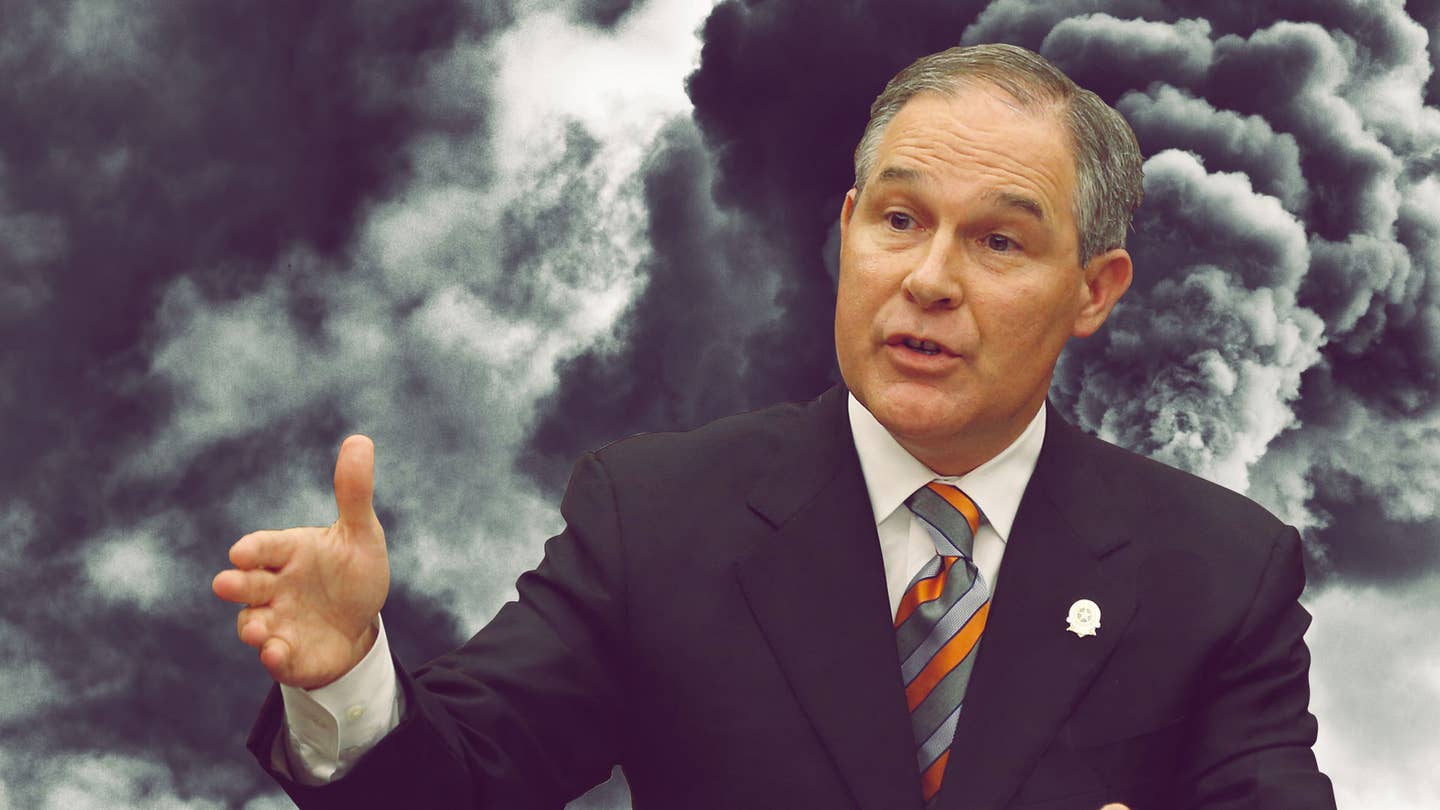 You’d think that the lead-flavored water in Flint, Michigan, all by its deadly self, would make it clear that the “P” in Environmental Protection Agency was something that every American could get behind.

That was before President-elect Donald Trump nominated Oklahoma Attorney General Scott Pruitt to head the EPA. The New York Times called Pruitt a “close ally” of the fossil-fuel industry, but that’s underplaying reality. He’s a corporate shill, the Pinocchio of serial polluters—all strings attached. And if auto executives in Detroit think the selection is great news for their own industry, they’ve been huffing something from the tailpipe. Ask Volkswagen how playing fast-and-loose with emissions rules has worked out for their business and image.

Let’s not even get into the high comedy of the EPA being led by a man who sued it, all while denying climate change and basic principles of environmental science. This is a state attorney general who not only fought to dismantle President Obama’s efforts to combat climate change, but let the coal industry ghostwrite the petitions he submitted in the case. That’s like seeing Preet Bharara, the crusading U.S. Attorney for New York’s Southern District, allowing Wall Street criminals to write the case for their innocence. It’s like an AG suing the government on behalf of big tobacco. How’s this for a literal chicken-shit public servant: Pruitt sided with Big Agra to weaken rules to protect Oklahomans against chicken manure fouling a scenic river and lake.

As for cars, the déjà vu, Seventies-style bleating has already begun in some benighted corners, claiming that the industry can’t possibly lift fuel economy to an average 54.5-mpg for new cars by 2025, nearly doubling today’s levels. There’s one problem with that: After mounting a half-hearted defense, carmakers voluntarily agreed to the rules. They assured us that, while challenging, the standards were within their engineering reach.

Beyond arguments for cleaner air and a chance to mitigate global warming, it’s crazy that anyone needs to revisit Detroit’s once-shameful history of fighting any call for fuel efficiency or pollution controls, preferring to whine, prevaricate or sue rather than lift a lazy finger and innovate. As homegrown automakers have finally come to understand, green regulations tend to be a boon to competitiveness, not a hindrance. The original Clean Air Act and fuel-economy rules of the Seventies may have (temporarily) killed off the muscle car. But they also saved Detroit from itself, forcing it to eventually meet the threat of efficient small cars from Japan and Europe, by developing its own fuel-saving cars, engines and technology.

Fast forward to today. General Motors, again spurred to compete by a bankruptcy—and, yes, a government demand for more-efficient cars—is enjoying all-time record sales and profits. Even their highest-profit SUVs and pickup trucks deliver dramatically better fuel economy than they did even a decade ago. A competitive threat from Tesla has GM responding with their own remarkably engineered cars, like the Volt plug-in hybrid and Bolt EV.

As for those muscle cars, we’re in a golden age that would make a Sixties buyer think he’d died and gone to gearhead heaven. The Ford Shelby GT350 and Chevrolet Camaro 1LE and ZL-1 can beat some of the best European sport sedans around a track. A buyer can walk into any Chevy dealer for a Corvette Stingray that combines 460 horsepower, near-supercar performance and nearly 30 mpg on the highway – or even a 650-horsepower Z06. So much for regulations putting a kibosh on Detroit’s business, or preventing consumers from having the cars and trucks of their dreams.

Certainly, auto regulators can be guilty of overreach or misplaced optimism. The latest west-coast call is for 15 percent of new cars to emit zero tailpipe emissions by 2025, yet sales of EVs are largely stuck in neutral. The current system includes a tangled mess of zero-emissions tax credits that have barely budged American’s car-buying habits, thanks mainly to dirt-cheap gasoline. But throwing out targets completely, or leaving the rules up to automakers, can’t be the right answer. If automakers and elected officials want to argue that CAFE fuel-economy rules are a flawed mechanism, I’m willing to listen – but let’s see them get serious about higher gasoline taxes, carbon trading or some other system that puts responsibility on automakers, consumers and energy producers alike.

Pruitt has yet to take office, but don’t hold your breath over potential epiphanies or friendly lunches with Al Gore. Pruitt’s legal machinations have largely tipped his hand. Before he’s picked out the office carpet, he’ll look to gut the government’s new rules or even the right to regulate power-plant emissions. With Pruitt’s blessing, coal-producing states are already fighting for their right to spread noxious clouds from coast-to-coast. Or even farther, where they can bump up against Paris climate agreement—which Trump has vowed to "cancel" like some pesky reality show—and give China yet another excuse to turn daylight to smoggy darkness in Beijing.

Yet even if Pollutin’ Pruitt can somehow dismantle the EPA or rules on auto and power-plant emissions, he may quickly find himself overwhelmed and overruled by the same free market that he professes to love. Coal is an increasingly uncompetitive pariah, its decline irreversible, thanks to cheap natural gas, the rise of renewables and global regulations that see it as planetary poison. Consumers may not always vote at the polls, but they'll vote with their pocketbooks for efficient, affordable energy, cleaner cars and air and water that won’t kill you.

For automobiles especially, California—that Thor's hammer of market clout—is already calling the regulatory shots. The nation's largest car market has been regulating tailpipe emissions since the late Fifties, long before it was in vogue. Even the feds now follow its lead on emissions rules, including that coming, nationwide 54.5-mpg standard. Throw in 13 states and the District of Columbia that also hew to Golden State standards, and you’re talking a solid majority of all U.S. auto sales.

Pruitt has invoked States' Rights to argue that the EPA has no right to meddle in the energy economies of coal-burning states: He'll have a hard time arguing that California has no similar right to set its own energy or pollution standards, or for other states to follow suit, especially when they're arguing for less pollution, not the right to burn coal and belch mercury and sulfur dioxide across all 50 states. And automakers, I’ll predict, will never again build cars that don’t meet 50-state standards—meaning one model for California and other strict states, one for everyone else—because designing and selling separate models is just too expensive and unwieldy, including for European and Asian makers. If Pruitt needs a crash course in this global auto reality, I'd recommend Alan Mulally, the former Boeing and Ford CEO whom Trump is now considering for Secretary of State.

I'm hopeful that Ford, GM and Fiat Chrysler will heed lessons as well. If they're smart, homegrown automakers will avoid backsliding like some sketchy addict who can’t handle some tough love and discipline. They must resist any urge to sweet-talk Trump or Pruitt into a free pass to pollute. The Good Old Days of Detroit aren’t in its hazy, hapless past. We’re living them right this second, with the best cars America has ever produced. Now, tell me again why we should turn back the clock?