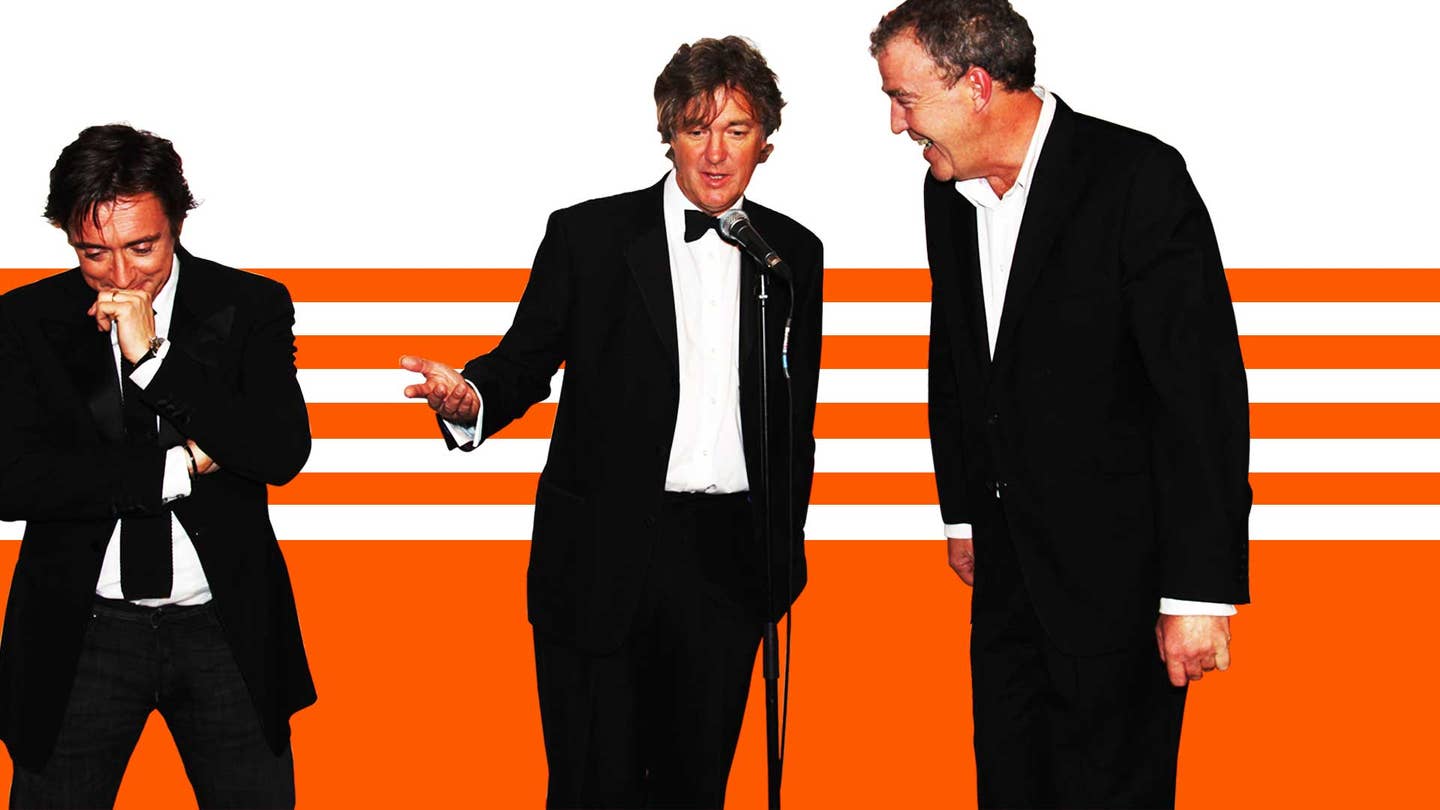 Years ago, before fate forced The Unenthusiast’s life upon me, I lived in blissful ignorance of Top Gear. Comparo tests meant nothing. I cared not for torque ratings. The Stig was a character from someone else’s dreams. The segment where Clarkson, Hammond and May destroyed a holiday caravan park, one of the funniest things I’ve ever seen, was the only segment on the entire show that had any resonance to me, a generally incompetent guy who hates camping. But now that I’ve been in this racket for five years, there’s suddenly a lot that I can relate to in The Grand Tour.

For all its high-budget gloss and hacky interstitial comedy bits, The Grand Tour is the ultimate distillation, the idealized fantasy, of the automotive journalist’s life. In the first five minutes of the first episode, the three protagonists bitterly list every publication and radio broadcast that has fired them. You hear the same conversation in every car-show pressroom and rubber-chicken Toyota junket dinner. But after that airing of grievances, the stars of the show then proceed to wreak unholy vengeance on the automotive industry, unhindered by even the mild shackles of the BBC.

What happens on The Grand Tour isn’t that far off from the professional experience of anyone who’s hustled his or her way into this gig. In the pilot episode, the protagonists compare the La Ferrari, the Porsche 918 Spyder, and the McLaren P1 around a racetrack in Portugal. I know plenty of people who’ve done similar things, for whom “Racetrack in Portugal” is a monthly occurrence. Even I’ve driven the 918 Spyder around an F1 racetrack, not caring about anything but fuel economy, and my driving style makes James May look like Sebastian Vettel.

In general, a lot of what these guys are doing looks familiar. At best, I’m a B-lister with a weekly column extolling the virtues of gas mileage and scolding about traffic safety; and yet, in the last year I’ve driven a Lexus sports car on the Autobahn, a Rolls-Royce convertible in South Africa, and an Audi A4 around the track at LeMans. These are the kinds of experiences car writers get almost as a matter of courtesy. For The Grand Tour, god help us, the automotive journalists have seized total control of the means of production.

In a show where Clarkson, Hammond, and May apparently have free reign and unlimited budgets to cart a high-end TV studio to six continents, and can drive any car, anywhere, at any time, they still have their own custom racetrack in England. That track has been designed ironically, in the middle of a forest, to include such wacky hazards as an electrical plant, an unexploded bomb, and a “house where an actual old lady lives.” Teams of Aston Martin mechanics appear to serve their whims, as do all the world’s greatest cars, ordered off a menu like specialty hamburgers. The entire car industry, desperate for the high-gloss auto porn, specialty expertise, and massive global fan base that the hosts have to offer, exists at Jeremy Clarkson’s deep-throated mercy.

The best stuff in The Grand Tour—and there’s a lot of good stuff from which to choose—comes when the hosts make snarky little asides about the luxury car death race that puts caviar on their tables. I loved the griping about the persnickety rules that Ferrari places on car testing, obviously borne from years of frustration at having to do business with the Italians. The bit where the hosts stage an assault on a Jordanian terror compound goes on at least seven minutes too long. But the conceit of having Clarkson and May give a standard dull review of an Audi sports saloon while ripping it through a vicious war zone is hilarious. They know their job is a meaningless farce. They even celebrate that fact. And that gives the show’s middle-finger even greater length. They’re the captains now.

So how do they get away with it? Well, for all their snark and voluminous knowledge about automotive mechanics and history, Clarkson, Hammond and May are the greatest promoters that the automotive industry has ever seen. In the first two episodes of The Grand Tour, other than the usual snark about the Prius and some good jokes about the frequency with which the VW Polo gets carjacked in South Africa, none of them have anything negative, other than minor quibbles, to say about any of the cars they drive. “The BMW M2 isn’t as fast on our custom racetrack as the BMW M3” doesn’t exactly qualify as a pan. The Aston Martin Vulcan, a dangerous monster, gets photographed as lovingly as Chrissy Teigen on the beach in Maui. And then Clarkson, after nearly dying multiple times inside the Vulcan cockpit that he can barely fit into, calls the car “old time rock-n-roll.” That’s a blurb worthy of putting on the car’s bonnet.

Even as I desperately squall about trying to persuade everyone to stop owning cars and to pop through town in self-driving Ubers, I have to admit that at the highest end, and even somewhere toward the middle, that we’re living in a second and final golden age of motoring. The Grand Tour, which I will definitely watch every week as required by the dictates of my unchosen profession,is the ultimate expression of this age, staged by the car guys who climbed to the top of the mountain using pitons of unbridled enthusiasm tempered with a little studied self-effacement. It’s possible to gain unlimited access to the best luxury products when you utter nary a critical word. Clarkson, Hammond, and May will wryly nibble at the hand that feeds them, but they’ll never bite too hard.