The reason behind the biggest spike in traffic deaths in 50 years isn’t some big mystery. 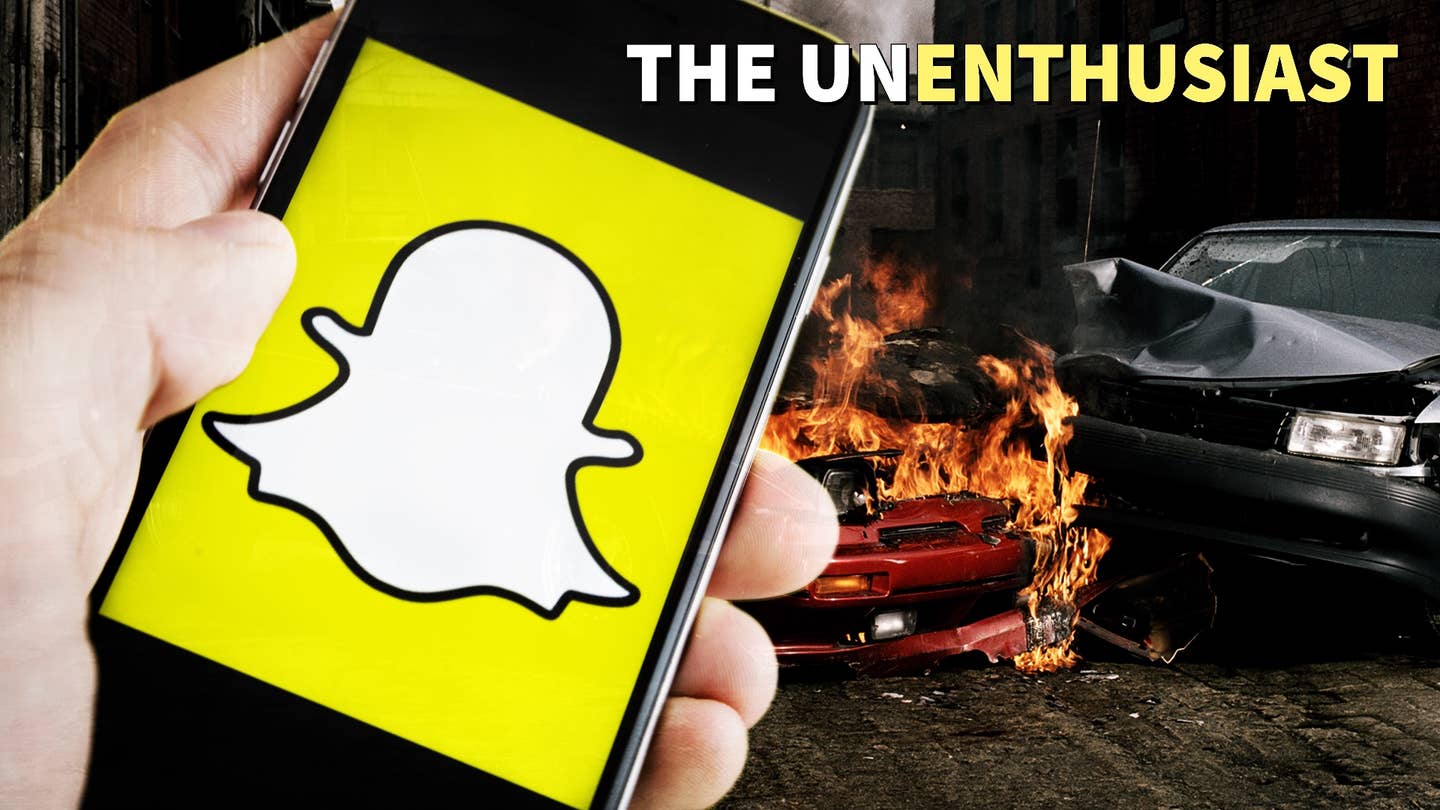 Completely buried by the news avalanche of the last couple of weeks was this below-the-fold New York Times headline: “Biggest Spike In Traffic Deaths in 50 Years? Blame Apps.” The story opens by saying that highway deaths have jumped 10 percent in the first half of 2016 from the previous year. Nearly 18,000 Americans died in car crashes between January and June. And then came the anecdote. On October 26, five people died in a Tampa-era pileup. A passenger in one car recorded a Snapchat video that showed the car was going 115 MPH, just before the collision.

My first thought was: sure, 115 MPH is too fast unless you’re on a track, but was the Snapchatter in fact also the driver? And then I realized it didn’t really matter; this is an actual social problem. Highway deaths are going up, and it’s not because car safety standards have declined. It’s because the combination between cars and tech is proving to be very hazardous to your health.

Because of some accident of God or history, I get to drive a brand-new car every week. These cars usually come with top-of-the-line tech systems that allow me to fully integrate my phone and the car into an unholy symbiosis of GPS and entertainment, where I can tell the car to call my wife or get me to the grocery store. Usually it does, and without a problem.

But not always. There’s too much distraction, too many buttons to push, too much going on. The book on tape pauses for some reason, and I have to think about how to restart it. The audio connection between the phone and car breaks down and I have to fiddle with Google Maps. I get a text, and I check it. This happens. Meanwhile, thousands of cars zoom around me at 70 mph while I punch at buttons like an old-school accountant at his desk. I do this, and I’m hyper-aware of traffic safety problems. Most people aren’t, and they’re driving vehicles that don’t have the ability to integrate tech like mine do.

Exhibit A is a teacher interviewed by the Times who uses his IPhone 6 to listen to IHeart Radio, give him directions, and enjoy podcasts about University Of Michigan football—pretty much equivalent to what we all use our phones for when driving.

“I’ve noticed that when I do have to touch the phone,’’ he says, ‘‘my brain becomes so totally focused, even in that short period of time, and I don’t really remember what’s happening on the road in those four or five seconds.”

That’s what happens to all of us. So what’s to be done? According to the Times article, insurance companies are at least paying lip service to the fact that this is a problem. The head of the National Highway Traffic Safety Administration said, “this is a crisis that needs to be dealt with now.” But that almost seems quaint given the current political climate. Whatever you think about President-elect Trump, you have to admit that traffic safety doesn’t appear to be at the top of the list of his concerns.

It should be, though, or at least it should be on the list. Traffic deaths don’t adhere to party loyalty or political ideology. Every person is at equal risk, any time they get into their cars, and every day brings fresh tragedies to Americans of every stripe, of every income level, driving any type of car imaginable.

We can’t count on distracted, tech-addicted individuals to change their behavior. Almost certainly, there’s no help coming from the government. The burden falls, fairly or not, on the car companies. They have the data, the knowledge, and the engineering skill. I’ve been writing about this industry for years, and I’ve met many good-hearted people. Yes, they want to sell cars, but they don’t like traffic deaths, either. The most cynical interpretation is that more traffic deaths lead to fewer customers, but in a case like this cynicism doesn’t really apply. I’m semi-confident that the industry will rise to this challenge.

However, I’m not so confident, and not so sure, about the solution. Is it full automation? Partial automation? Will the public see self-driving cars as an assault on their freedoms, or will they take their lead from both the trucking industry and the U.S. military and embrace their new self-driving overlords?

Or will some other, yet-unforseen, solution emerge? I’m not sure. But I’ll keep dreaming of the day when I see a report that “Traffic Deaths Decline By 25 Percent”—or, even better, “Traffic Deaths Become Statistically Negligible.”

I’d be happy to see those headlines buried by a rampaging news cycle.