Dear Europeans: Please Stop Talking and Listen to Me Now

In which we return some fire across the pond. 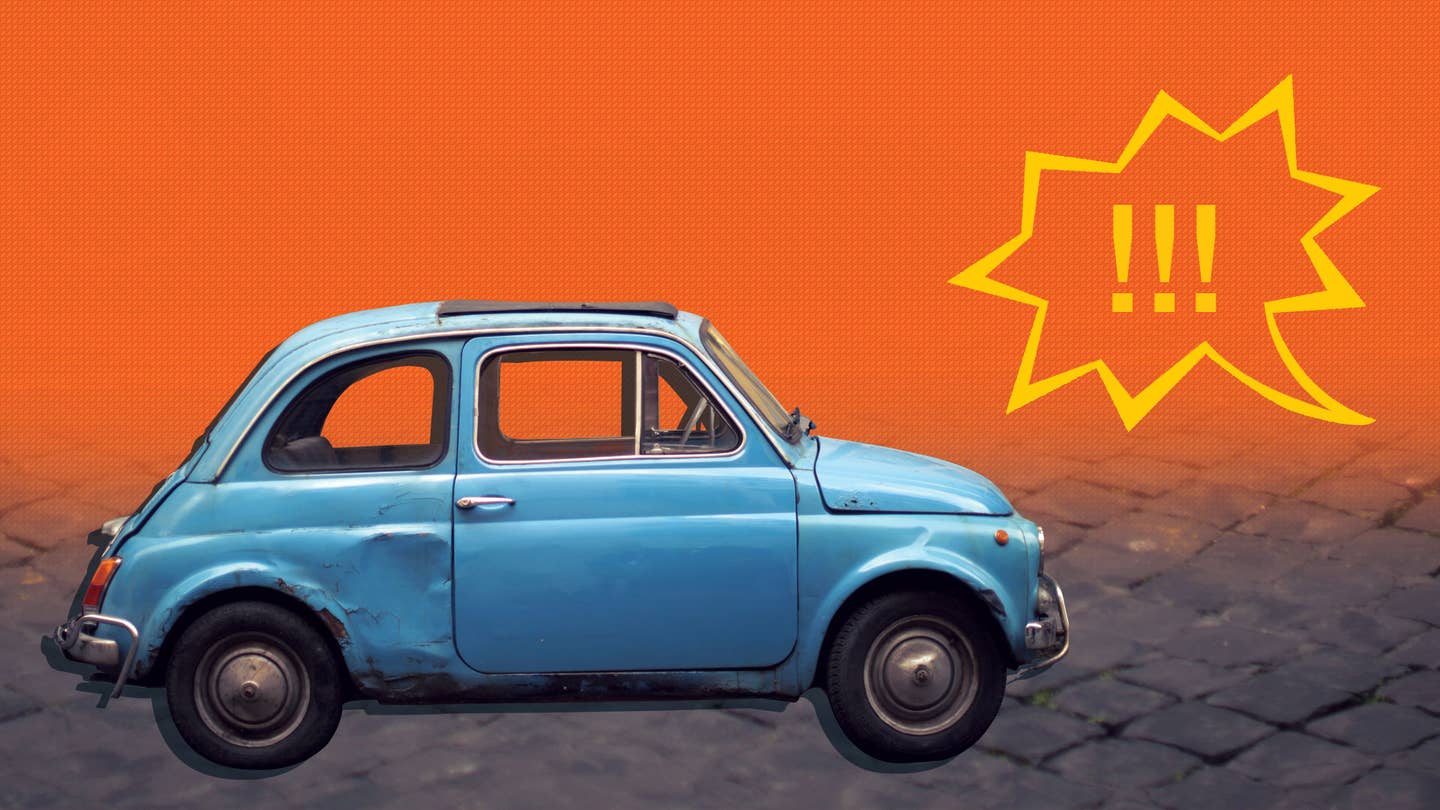 I get it. You look down on us Americans. We’ve got our 128oz. Big Gulps, we think a building from the 1800s is old, and our best-selling passenger car is a 2 ½ ton truck with three more cupholders than it has seats. Fundamentally, Yanks make for easy targets—there’s just a lot to work with. But here’s the thing: if you’re going to make fun of us, make sure it’s funny. And if you’re going to condescend, make sure you’re actually right.

Let me get one thing out of the way: I love Europe. Every time I go, no matter the country, I have a great time. The roads are lovely, the lane discipline is excellent, and I tend to get along well with your people a great percentage of the time. Nevertheless, in the last week, you’ve disappointed me twice, and I’m using my column to rant about it.

Last Sunday, I attended the California taping of The Grand Tour out in the desert. While I will not give away the premise or results of the films we saw, Clarkson, Hammond, and May’s new venture is shaping up to be an excellent program. It’s basically Top Gear, only they can’t play the hits, so to speak. Which should give them all kinds of new creative directions. I know as well as anyone how hard it is coming up with something to say every week, but by basing their show on an actual Grand Tour of the world, studio segments can be localized.

Clarkson and Co. are the uncontested kings of edgy humor. While on the BBC, they offended basically everyone, and being unilaterally offensive is an important component of humor. And so when they came to America with a new show backed by the relative freedom of the Internet, I went to the taping hoping to see bombs dropped on American culture by the best in the business. I welcomed it. I was actually itching for it.

What we got, though, was Jeremy doing a studio segment in which he “teaches Americans how to speak English,” using terms like “boot,” “bonnet,” and “petrol.” For someone who can manage to write an entire car review without even mentioning the car until the last sentence, for someone who makes the rest of us video presenters look like amateurs, for someone that brilliant with words, this was a hack bit. It’s what YouTube commenters type out on an hourly basis, not what the three most legendary automotive presenters of all time should be putting up as their best.

I get it, you need evergreen material, the show will air after the election so you can’t talk about what a raving lunatic Donald Trump is, and you probably don’t want to be assaulted with rocks like the last time you toed the line in America.

But guys, come on.

The problem here isn’t just that the holy trio of car media tried a bit that didn’t really work. Trying a bit that doesn’t work is how you make great TV. And this was a new show, so some things are going to work, and others wont. (Don’t worry, there was plenty of other material that worked.) The problem is that The Grand Tour’s flat bit is a microcosm of how Europeans talk to, and about, Americans, especially on the internet.

I get it—we say some words different from you. But that doesn’t mean you own those words. In some cases, the English specifically, love to claim words that aren’t even theirs! My favorite by far is Jaguar. The English love to correct the American pronunciation of Jaguar as if the Queen’s English “Jag-you-are” is the correct way, because that’s how they say it and it sounds more sophisticated. When actually the word is derived from Portugese, where it is pronounced “Yag-wahr,” much closer to the American pronunciation than the Queen’s English.

We need to agree that trying to be funny by pointing out that different cultures pronounce words differently is no longer funny, especially on the internet, where there is no time limit to coming up with your very own, original, actually funny joke. Just stop it, you’re embarrassing yourselves.

Rant 2: Just because your government teaches you to drive a manual gearbox, doesn’t mean they are teaching you correctly.

Last week, I posted a video on my YouTube channel, The Smoking Tire, in which I did my very best to give a tutorial on how to drive a manual transmission vehicle. I frequent sites such as Reddit’s /r/cars and there are no fewer than five questions posted on the front page of that site on a daily basis about driving stick. So I figured I would provide my little bit of service to that community by offering a linkable video to hopefully answer most people’s questions. The video has done well so far. It’s not perfect, but it covers the basics well.

Europeans, we need to talk about your reactions to this video. I know that you’re European because all of you made sure to mention that you're European. And might I say that it’s very nice your different governments mandate learning how to drive a manual in your basic driver’s education classes, and that your licensing tests must be taken in manual transmission cars. I think that’s a good thing for the world.

However, please realize our government doesn’t mandate such things. You don’t need any kind of license in America to drive a stick shift vehicle; here, there is no testing for it at all. And so fewer people learn, because fewer people have to learn. I’d imagine in Europe, if manual gearboxes were no longer mandated as part of the licensing program, the same thing would happen.

The point is, those of you who have chosen to share your experiences from the other side of the pond have done so in an almost unbelievably condescending way, and with really the wrong target—someone who is actively learning how to drive manual by clicking on the video in the first place, and someone who is providing said video. Maybe even to someone in your own country who isn’t yet old enough to drive.

Furthermore, a great percentage of those Europeans, while congratulating themselves for learning something the government makes them learn, spent a few more sentences correcting my driving instruction. The primary point of contention? The practice of rev-matching on downshifts. Rather, their adamant defense you don’t need it at all. Because their government-issued driving instructors said they don’t. Here’s the thing: You're wrong! I'm right!

Here's the short of it: When you shift up, you press the clutch and let off the accelerator, to let the RPM’s drop a bit to meet the next gear. Follow? When you shift down, you do the exact opposite, pushing in the clutch and “blipping” the throttle to bring the RPM’s up to meet the lower gear. “Blipping” is just a fancy term for a quick stab at the accelerator pedal, but it’s an integral part of driving a manual transmission, especially in a sporty setting.

Why do we blip the throttle on our downshifts? Primarily, it’s because when you let off the clutch pedal, you want the RPM’s of the engine to match the RPM’s of the transmission. This is how you execute a smooth shift. If you simply drop a gear and do not rev the engine to match that gear, that’s called “clutch braking,” and it’s literally slowing the car down by dragging it against the clutch. When you clutch brake, two things happen, neither of them good: 1) The clutch gets worn out faster than if you had matched revs, and 2) you unsettle the car’s chassis (and your passenger’s stomachs).

Excess clutch wear is the less serious of the two issues. If your clutch was originally going to last 100,000 miles under perfect conditions, maybe it will last 70,000 or 80,000 miles if you drag the clutch on downshifts. Most people can live with that if it allows them stay lazy about shifting. Some claim that clutch braking on downshifts improves fuel economy, but more frequent clutch replacements offsets any savings.

Unsettling the chassis is the bigger problem—much bigger.

The thing is, I feel for a lot of these European commenters. I mean, if you’ve got a tiny little Fiat Punto with a half-liter engine carrying the rotational inertia of a whiffle ball, by all means, just drop that clutch. Drive that car like you hate it, because honestly, you probably do.

But you get into my 500-horsepower Corvette up on a canyon road, or a new Mustang, or any fast car, and you try to drop a gear without rev matching, you’re going to find yourself ass-first at the bottom of a cliff, and the cops may find you three days later. Or, they may not.

The point is this: You may drive your diesel Vauxhall however you like. Rev match, clutch brake, whatever you want to do. It’s your car, your clutch replacement, and your life. But when I’m making an instructional video, I’m not going to skip the part about how to downshift properly, with a rev match. Because that’s the right way. That’s the way to keep the chassis balanced, the clutch from wearing out, and your passengers from throwing up all over those cloth interiors you guys love so much.

Put it this way: If I was going to teach you how to cook chicken, I’d show you how to make a beautiful roast chicken in the oven with a perfect balance of seasonings, a crispy brown skin, and a delightful dipping sauce. It might not be the easiest possible way for a novice to eat a meal, but the concepts you’d learn would translate to other recipes down the line.

When you’re driving a manual transmission, smooth leads to fast, and not the other way around. And the way to be smooth is to match your revs when you change gears. The idea is that your passengers should never be acutely aware that you’re driving a manual transmission—when done correctly it should be perfectly seamless. If you really didn’t need to rev match, why would automakers install automatic rev matching software? They put it there because whether you do it yourself or the car does it for you, that’s the correct way to do it.

You could also probably cook a chicken in a microwave with no seasonings whatsoever. Throw it in a Tupperware, splash some Ketchup on there, and voila! Technically, that’s chicken. Just like technically, clutch braking is one right way to drive stick. But feed that crap to someone, and they will look at you funny, not want to go anywhere with you, and never ask you again for advice on how to cook a chicken.

From Venice (California) with love,

The FCA head honcho had been planning on making an appearance.

Along Came a Fiat 124 Spider