After the Finale, An Open Letter to Top Gear’s Producers

A few thoughts on the outgoing shaky season—and a wish list for the next one. 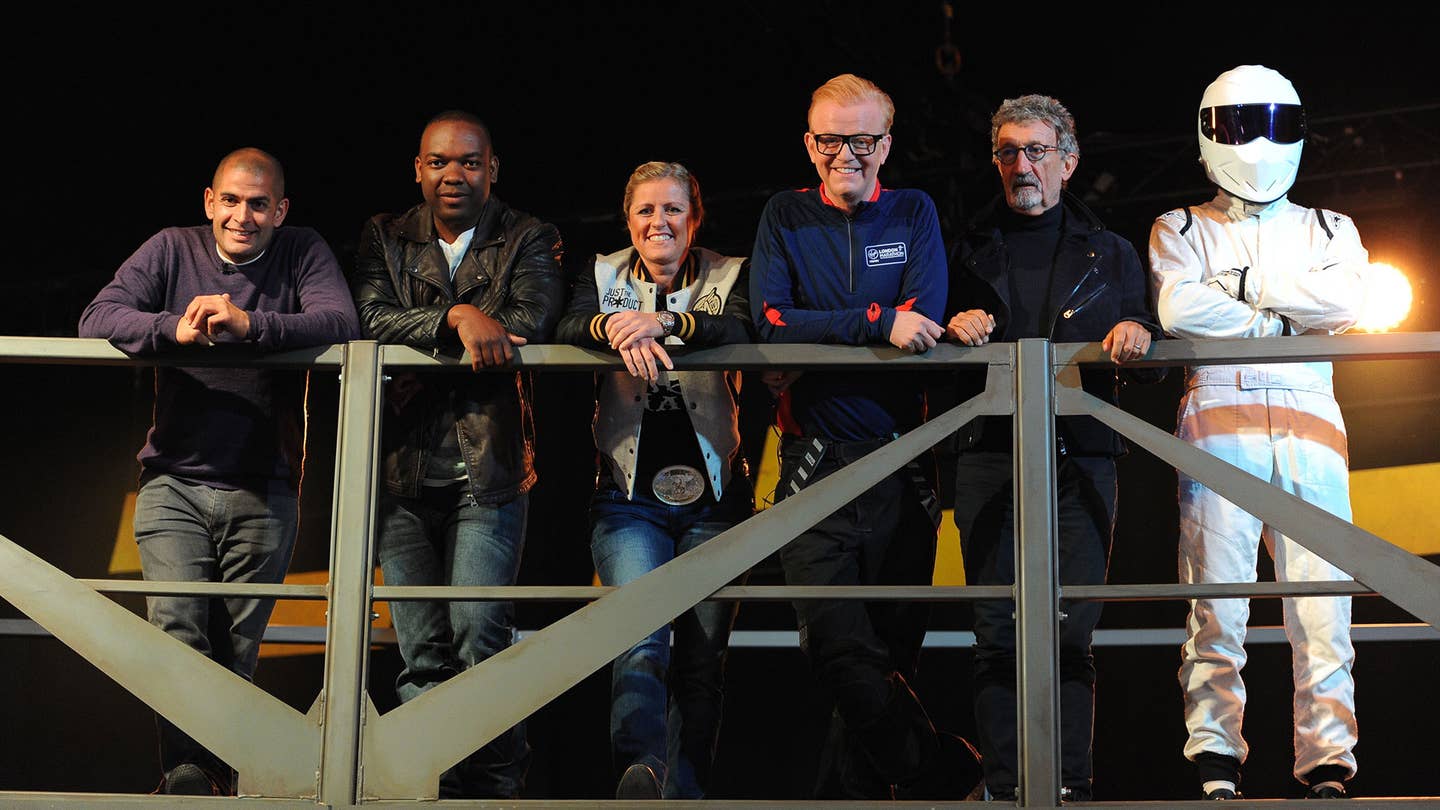 To the fine folks at the BBC,

Congrats! You did it. This week's season finale means you made it through one of the rockiest seasons in Top Gear history. Sit back and have a Pimm's cup or a pint or whatever tipple you prefer. Hell, make it a double. You deserve it.

Before we dive in, just wanted to say this Top Gear season finale wasn’t bad, so ignore those record low ratings. That Chris Harris film about the Acura NSX, in which we get a bombshell (hope it’s okay we still use that word) that he never cared for the original NSX, was properly decent, despite coming off largely like a commercial. The winner of the night was undoubtedly—and unsurprisingly—Matt LeBlanc and that marvelous Porsche 911 R segment. Not only can the fella wheel the bejesus out of a car, but his commentary is always spot-on and delivered perfectly. And Rory Reid was his usual, affably competent self during the Mustang bit. (Congrats on getting the right-hand-drive ‘Stangs, by the by. Enjoy ‘em.)

My favorite part of the night? Watching that shouty ginger Chris Evans don a poncho marked “Loser” and get doused with muddy water by Harris in the Mini. Points for finally imparting some drama onto that rallycross track, and triple points for using this season's Top Gear finale to make Evans look like the wet donkey he is. Apologies, but we’ve got to talk about that orange-haired halfwit for a quick second: Kudos for getting rid of him. The eardrums of the American people are profoundly grateful. (Besides, we have our own loud-mouthed orange-haired halfwit to worry about.)

While I understand Evans won't be getting a severance, perhaps you could take up a small collection so the man can afford to buy a new outfit? If he’s due to be questioned by the police about that nasty sex scandal, he probably shouldn’t wear the same ratty jumper and stretched-out yellow T-shirt we saw week after week. Here’s hoping that he’s matured since the days when he enjoyed “getting his willy out” in the workplace and that none of you were subjected to that little limp noodle.

But enough about that twit. May the only Chris Evans in the zeitgeist henceforth be of the Captain America variety. So, you’ve got a new season to plan! We had a few quick thoughts to make it pop.

First, please give LeBlanc the lead presenter role, if he wants it. The guy’s just so great. It’d be wonderful to see him get both more travel segments as well as more time at the test track. Let him get as technical and comical as he wishes, since he excels at both. If you need extra money for his salary, may I suggest bidding adieu to Eddie Jordan? No one is discounting the fellow’s storied pedigree, but he adds little to the mix, aside from his spoon-playing skills.

Second, shake up the format a smidge. You don’t have to try to replicate the magic that Jezza, Hamster and Cap’n Slow made. Partly because that’s almost impossible, but mostly because if you change the narrative, everyone will stop comparing your product to theirs. Ditch the celebrity chat. It’s not working on any level. Play to Sabine Schmitz’s strengths and get her on every track you can. Don’t be afraid to get granular about the cars. What made Clarkson and Co. so wonderful was that they were first and foremost automotive journalists. We’re here for the newsy bits about each car. The obvious setups and resulting laughs should be ancillary to a meaty takeaway.

Third, when you’re covering a vehicle that’s been out for ages (i.e. Tesla’s Model X or Audi’s R8 V10 or Ford’s Focus RS) then bring the heat by showing us something new. By the time your show airs, the Internet has already been flooded with heaps of content on those cars. A drag race between a Tesla and any other car is already staid. Maybe Reid could’ve tried to see if the Model X could out-accelerate NYC's traffic lights.

Finally, if the presenters’ delivery sounds scripted, then the scripts need work. LeBlanc spent a decade selling lackluster lines like “How you doin’?”—the guy’s used to subpar material. But he had a hard time choking out some of the lines this season. And while this is less of an issue with Evans gone, in general, it’s never fun to watch two people who aren’t actually friends disagree about something, like whether a new Rolls-Royce Dawn has an attractive rear end. It’s just cringeworthy.

As I said at the beginning of your season, there are a lot of new pieces in play, and it’ll understandably take some time to gel. It’s like the shakedown ride after a rebuild; there are going to be some squeaks and leaks that need addressing. You just fixed one of the biggest, most annoying, carrot-topped issues. Now you can focus on honing the rest of the minor ones and making Top Gear great again.

Ex-presenter reportedly groped a female co-worker and flashed her every day for nearly two years.