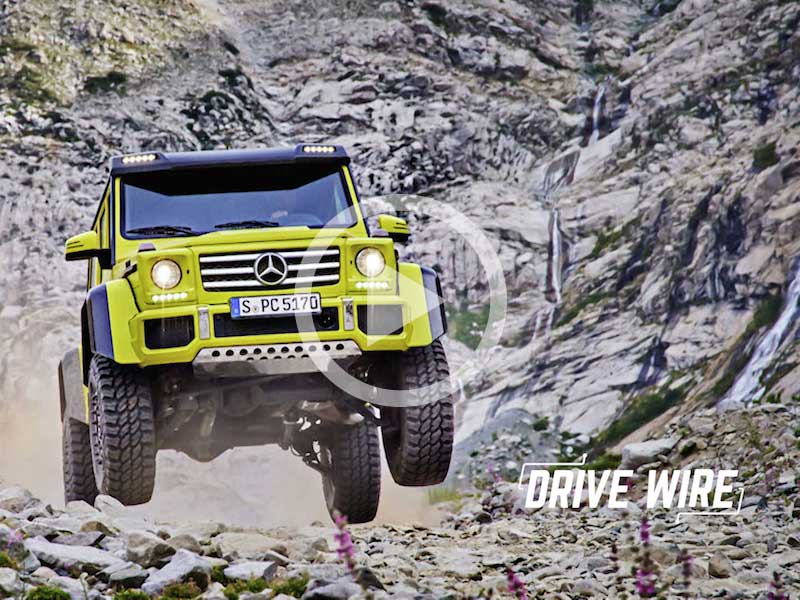 Hey guys, it’s Christina Thompson and this is Drive Wire for Friday, April 15.

Huge news from Mercedes-Benz today as the stalwart and bad-ass G55 Gelandewagen looks to be getting a stablemate. The G500 is a purpose-built off roader that makes the G-wagen look like a crossover. The G500 is designed from the wheels up to pound some serious ground, with a twin-turbo four-liter V8 making well over 400 horses and putting them down through portal axles. Due to a beefed up suspension, the big Benz boasts over a foot and a half of ground clearance. Breakover angles? Don’t even worry about it. Fording depth? More than three feet. Interior? Just as posh as the G-wagen. As for the price, it seems likely to fetch a shade over a quarter million. Put your order in if you’re into this sort of thing.

Porsche has been caught testing a new and thinly-disguised 911 variant from the sharp end of their performance spear. The look of the 911 is a blend of new 991 and old GT3, but the only thing you can trust on this test animal is the crazy vents. Whatever it’s running out back of the rear axle is a serious motor, but no telling if it’s a normally-aspirated motor, making this a GT3 variant, or a turbo setup, which means this is a GT2. Either way, this is good stuff – we can’t recall a bad Porsche with the GT prefix.

Mercedes AMG is reaching a new level of mad scientist with a new E63 with a shade over 600 horsepower, capable of getting to 60 in 3.5 seconds in the S configuration, thanks to its standard all-wheel drive. We should note that although this info was supposedly leaked from Mercedes themselves, the news turned up on a Russian enthusiast forum, so take it with a grain of salt. Still, talented amateurs say the numbers and specs are in line with what Mercedes has been doing, for what that’s worth. We’ll know for sure at September’s Paris Auto Show.

Today’s gear is all about easy living. Get your indolence on with the Kaiser inflatable air lounge. Basically, it’s a thin, tough bag that you scoop full of air and then collapse into – in other words, everything we ever wanted for the beach, campsite, or the line at the DMV. Plus it floats in the pool, deflates in seconds and packs in a backpack. Check it out on Indiegogo.

For today’s ridiculous video, we have proof that the world is getting better every day. We’ve passed right by the hoverboard and gone to the Flyboard, an insane flying platform that inspired its inventors to film its wild ride. Check it out now and lust after it forever.

Audi’s get longer, a convertible speed record, a spied Porsche, an electric bike, and skateboarding paradise.