Driving in Seoul, Like in New York City, Means Taking No Prisoners And Giving No Quarter

Drivers there use the same technique people in the Big Apple do—but the South Koreans do it better. 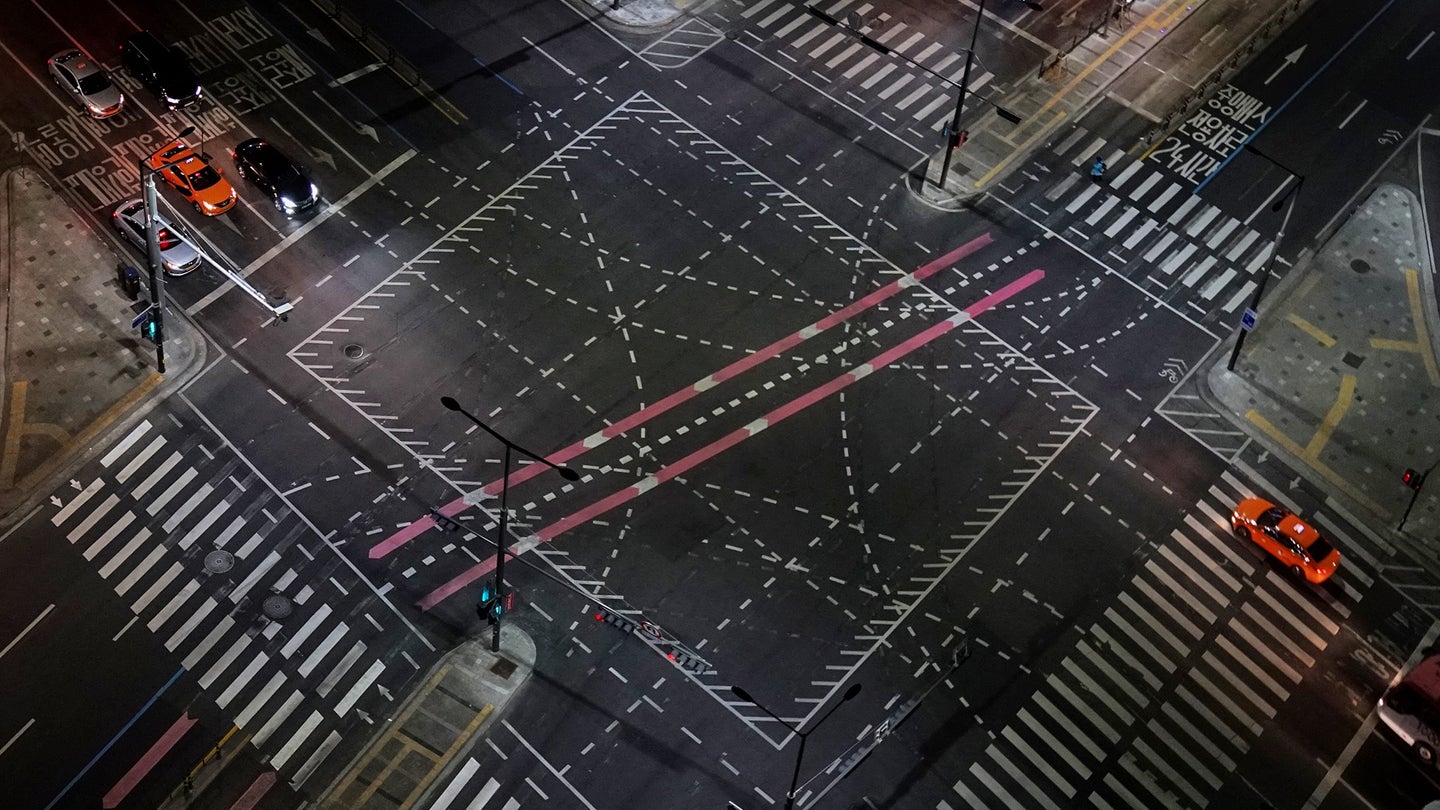 I waited until deep in the night for my first stab at driving in Seoul. Tangling with the city's horrific rush hour traffic while also getting my bearings seemed like a bad ideal; I wanted empty streets, with plenty of runway to learn the rules of the road without embarrassing myself in front of tired residents hurriedly making their way home.

Granted, I’d driven in international metropolises before, but the impenetrable language barrier means Asian cities present their own challenges. Seoul, though, was uniquely intimidating. As I spent the first day battling jet lag in my hotel, I took occasional peeks past the curtain in my darkened room at the massive Cuisinart of an intersection below. It was riddled with arrows, bars, arcing dotted lines, and a pair of wide, pinkish stripes that one friend, commenting on an Instagram post of the chaos, likened to power-boost strips in Mario Kart. Korean markings explained nothing at all. A gigantic, perfect square lined with painted cilia was similarly unhelpful. It was as though the designer had accidentally given his planning PowerPoint to the construction manager instead of the actual blueprint, and the guy ran with it. As a result, I expected my driving in Korea would be a persistent riddle sprinkled with bursts of fatal error.

Finally, at 10 p.m., I went down to the garage to pick up my vehicle for the week: a Genesis G80 Sport. Its rich blue paint job popped beautifully, which set it apart from the sea of gray, black, and white cars that make up the overwhelming majority of vehicles in South Korea. But it also meant I'd be obvious—the American skittering haphazardly through traffic trying to reach a green arrow somewhere. Hopefully, the night would mask my antics.

But the brain tends to presume the worst. I pulled out of the garage, turned right toward one of the seven or eight “downtowns” that Seoul possesses, and immediately fell into traffic as though I were gliding effortlessly down Main Street, U.S.A. The first rule of international driving is, after all, fairly simple: Do what everybody else does.

That worked fine for several blocks...until I found myself first in line at an intersection trying to make a left turn that had three different possible left-turn outcomes, based on which dotted line you followed. I realized I needed to be following the right-most left-turn dotted line, so I simply edged toward it in my typical hardened fashion—cutting off another vehicle on the same path in the process. There was no angry honk, no exhibition of whatever the South Korean equivalent of the middle finger might be. He simply let me do it. Indeed, before long, I felt like I'd found my groove—first in the wee hours and eventually in broad daylight—traffic cams be damned. Surprisingly, I felt most at home in busy traffic; not gridlocked rush-hour scenarios, but crowded boulevards where all the vehicles still moved at reasonable clips.

I eventually found my "flow" when I realized a key parallel Seoul has with another city I drive in frequently, New York. It’s a driving quality that most other cities don’t seem possess even though they should, as it’s perhaps the most natural order for urban vehicles. In both Seoul and New York traffic, see, the abiding rule is that you move forward by simply occupying the space ahead of you, regardless of whether someone else already has their eye on it. If it’s there, you slide in and take it, insinuating your own right of way.

That might sound simple, until you realize most drivers think of themselves as part of some kind of society, where honorable drivers yield here and wave there and everyone follows the lines and the rules. In New York City and in Seoul—like no other modern cities I can think of—drivers simply push forward, without spending a lot of time looking left or right or “asking permission” from other drivers with eye contact. It keeps traffic moving, and is the reason that NASCAR driver Jimmie Johnson once told me in an interview that New York City cab drivers are the best drivers in the country. They don’t screw around, and they aren’t wishy-washy or timid.

Obviously, this doesn’t mean you barrel through intersections without looking; it means you thread your way through traffic confidently. It’s the same working theory behind a racing line—whoever has it takes it, and the other must yield, which might explain Johnson’s intuitive grasp of the NYC method. Conversely, drivers without this mindset—with all their nervousness and false starts and half-hearted accelerative spurts—tend to do poorly on city roads, thus drawing rage from savvier locals who squirt through openings with ruthless efficiency. It's a strategy that works incredibly well in crowded city traffic (though it’s likely frowned upon by officials). Call it the unique combination of assertiveness coupled with a fairly obvious disregard for other drivers.

Which brings us to what might be the only divergence in this parallel: attitude. Korean drivers harbor no ill-will when you make your move on them, or even when you screw things up, as I did on many occasions. There’s no point in waving an apology or making eye contact after the fact, because they just don’t care. Once your past each other, it’s like neither of you ever existed to the other. New York drivers, though...well, let’s just say they’re a crabbier lot about such things. But even there, that only tends to ocurr when ignorant outsiders don't know how the rules work, or get frustrated with themselves when someone moves ahead of them because they hesitated a beat too long.

Regardless, both cities have an edge that—while surely contested by the keepers of the cameras—at least in Seoul, makes driving through them less an ordeal than a process. In fact, once I realized that my own New York-honed instincts meshed with those of Seoul's drivers, I felt immediately at home, damn the language barrier. After a few miles, I was galloping around town in that sweet blue G80 like I owned the place. (Although considering the fines I likely accumulated from the all the many types of traffic cameras scattered across the city—for red lights, speeding, tailgating, bus-lane restrictions, and more— I probably do own the place by now.)