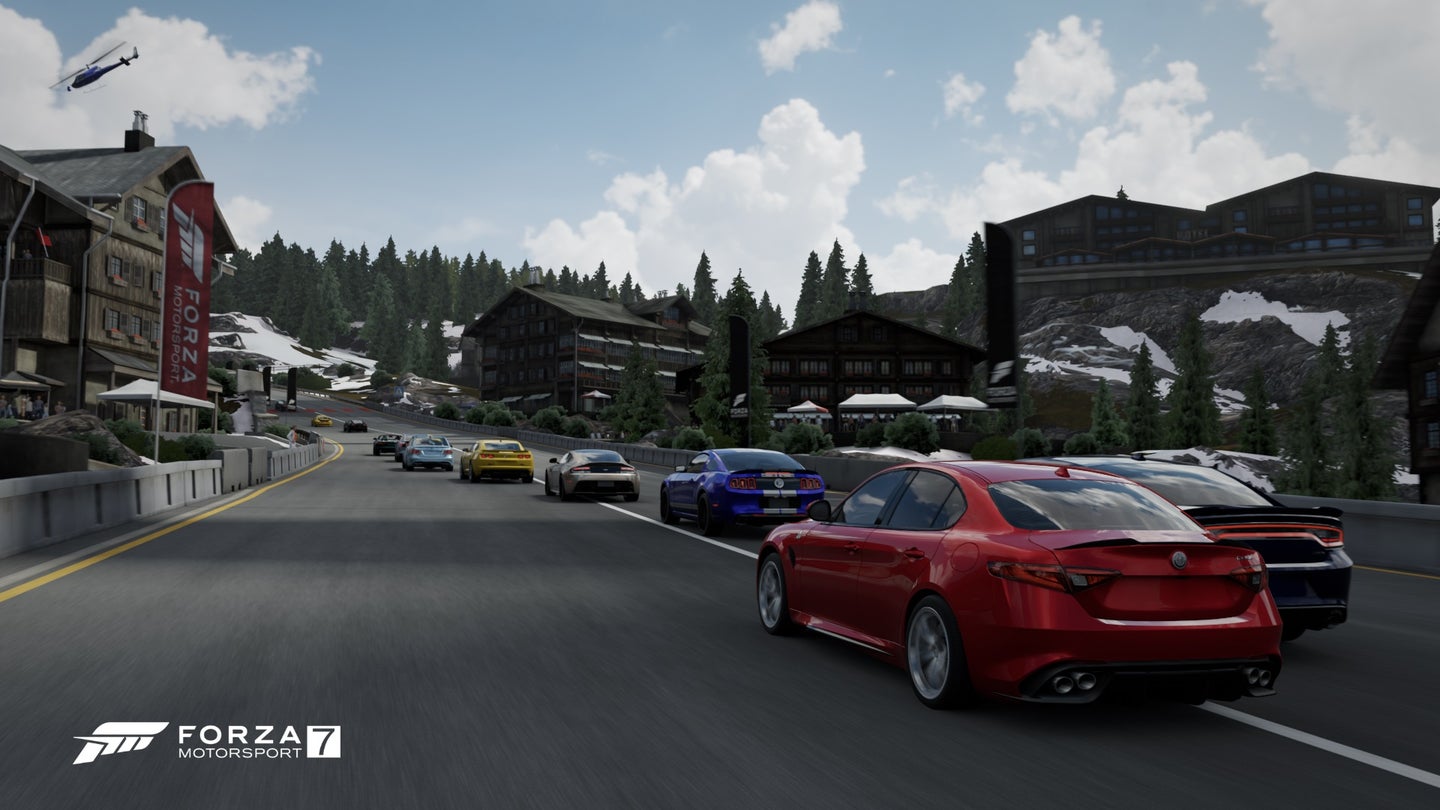 The last 12 months have been busy for racing game enthusiasts to say the least. With pretty much every major franchise having launched a title in 2017, picking one out as a gift for that auto-obsessed gamer in your life can be daunting, especially for the uninitiated.

Before you hit "Add to cart," let's separate the Forzas from the Marios, and get a quick and Dirty rundown on the best virtual stocking stuffers that'll keep 'em racing through the holidays.

As its name suggests, Dirt 4 is the latest in a racing series that specializes in the snow, gravel, and well, dirt. Featuring machines from '80s Group B, modern rallycross, stadium truck racing, and every rally-bred thing in between, Dirt 4 lets players roll around in the mud without even having to wash their hands afterward (actually, let's go ahead and do that anyway).

Dirt 4 lets the player choose between "gamer" and "simulation" physics, the latter being aimed at hardcore rally enthusiasts who may or may not have an old WRX project car sitting in their garage and the former being tailored for the player who just wants to sit back and take a virtual, rally-prepped Citroen off some sweet jumps.

Hailing from a series that started out life bearing the late, great Colin McRae's namesake, Dirt 4 is a choice gift for anyone who would take a Lancia Stratos over a Ferrari any day of the week.

What do they need to play this? Xbox One, PlayStation 4, or PC

Who should I buy this for? Your monster truck-obsessed nephew, Subaru enthusiasts

While this year's IRL Formula 1 season has come to a close, the virtual F1 season that takes place in your living room runs all year round. Putting players in the cockpit of open-wheel racing's fastest machines, F1 2017 aims to simulate the life of a modern-day F1 star, throwing in all of the licensed cars, tracks, and opponents that characterized the last season of motorsport's most prestigious series.

Okay, so while it probably won't make players go to lavish parties, undergo rigorous diets, or chug champagne after every podium finish (well, I guess you could actually do that), the game does have a team management mode, in-game commentary courtesy of David Croft and Anthony Davidson, and engines and transmissions that realistically wear out and fail. Taking a page out of the new South Park RPG, F1 2017's hardest difficulty mode is simply labeled "McLaren Honda."

What do they need to play this? Xbox One, PlayStation 4, PC, Mac, or Linux

Who should I buy this for? Your cousin from Austin who swears he smoked Lewis Hamilton between the lights that one time.

With a car list of more than 700 and a location count of 32, variety and breadth are the names of the literal game with Forza Motorsport 7. Featuring the latest and greatest hypercars, Australian V8 supercars, classically raucous American muscle, silent Formula E racers, body kit-ready 90s JDM metal, seven-figure vintage Ferraris, and absolutely everything in between, the latest installment of Forza is a gargantuan automotive encyclopedia digitized for living room consumption.

Whether you're shopping for a young gamer in the hopes of sparking an interest in cars or a seasoned gearhead whose last foray into gaming involved an interplanetary skirmish with demons on MS-DOS, Forza 7's otherwise reasonably realistic handling model can be dialed down significantly, making the game both supremely accessible for newcomers and admirably deep for genre veterans.

The ability to run at a gorgeous 4K, 60 fps with HDR enabled on Xbox One X doesn't hurt either.

If racing games were superhero movies, Forza would be the juggernaut Marvel Cinematic Universe. Top-tier production value, dizzyingly large cast lists, and an uncanny ability to light up the brain's pleasure centers. While not without its gameplay faults,

What do they need to play this? Xbox One, or Windows 10 PC

Who should I buy this for? Car-loving Xbox One owners, wannabe car collectors

Widely considered as the father of console racing as we know it, the Gran Turismo series underwent a radical change in ethos when it made its PlayStation 4 debut this year with GT Sport. No longer will GT games be multi-hundred car-collecting, automotive RPGs (à la Forza Motorsport). Instead, the franchise is adopting a focus for FIA-sanctioned online competition. The result? A relatively paltry car count of 177 (with a large portion consisting of hunkered-down racecars and fantasy Vision GT vehicles) and 19 track locations.

While fans yearning to take every generation of Nissan Skyline on back-to-back laps around Silverstone are now better off playing Forza, what GT Sport has to offer isn't necessarily a step behind—just a step in another direction. The online "Sport" mode is, speaking from firsthand experience, genuinely fun to play and Gran Turismo's long-running penchant for painstakingly detailed and beautiful visuals stays solidly intact.

If Forza Motorsport 7 is the city's best burger joint, playing Gran Turismo Sport feels like sitting in a casual, Michelin-starred restaurant. Sure, the portions aren't nearly as big and the music is a little off-putting, but ultimately an enjoyable—albeit different—experience.

What do they need to play this? PlayStation 4

Who should I buy this for? Car-loving PlayStation 4 owners, wannabe racecar drivers

Serving as an enhanced port of 2014's Mario Kart 8 originally released on the Wii U, Mario Kart 8 Deluxe brings Nintendo's go-kart hooning roster of characters (and all of the original game's DLC) to the Switch. While you certainly won't find historic F1 circuits, options to tweak camber, or any real-life automobiles (bar a couple of promotionally tied-in Benzes) here, what you do get are an eclectic collection of candy-colored, gravity-defying karts and bikes, the ability to strike your opponents with literal lightning, and the latest entry in a 25-year gaming institution most famous perhaps, for its friendship-ending split-screen gameplay.

Out of the box, Deluxe comes with 48 tracks—the most circuits ever stuffed into a Mario Kart game. When getting-there-first gets stale, players can indulge in the game's Battle Mode, essentially Smash Bros. on wheels.

Hands down the most kid-friendly title on our list, Mario Kart 8 Deluxe should make for a formidably enjoyable gift for the youngin in your life regardless of whether they're headed for daycare or the dorm room.

What do they need to play this? Nintendo Switch

Who should I buy this for? Anybody with a mental age less than 13, Switch owners who've spent the past 10 months playing nothing but Zelda

And then there's Project Cars 2. Made for those who find the likes of Forza and Gran Turismo a little on the simple side, this pseudo-simulator is best enjoyed on a high-end gaming PC with an accompanying gaming wheel. Boasting 180 cars across 9 motorsport disciplines, Project's roster of vehicles is similarly sized to GT Sport's list but features a little more variety than Sony's game.

However, Project Cars handily beats both GT and Forza when it comes to the tracks it has on offer. With a whopping 60 tracks (the majority being laser-scanned, real-life locales) that all feature variable weather conditions, players can find themselves racing in an inexplicably snowy COTA one minute, then in an abnormally sunny Brands Hatch the next minute.

It's also the only game here to feature the McLaren 720S, for what it's worth.

While not quite as accessible as its rivals, Project Cars 2 delivers a realistic, globe-trotting experience for guys and gals who take their virtual racing seriously.

What do they need to play this? Xbox One, PlayStation 4, or PC

Who should I buy this for? Your recently divorced uncle who just blew his Christmas bonus on a sim racing sled for his man cave