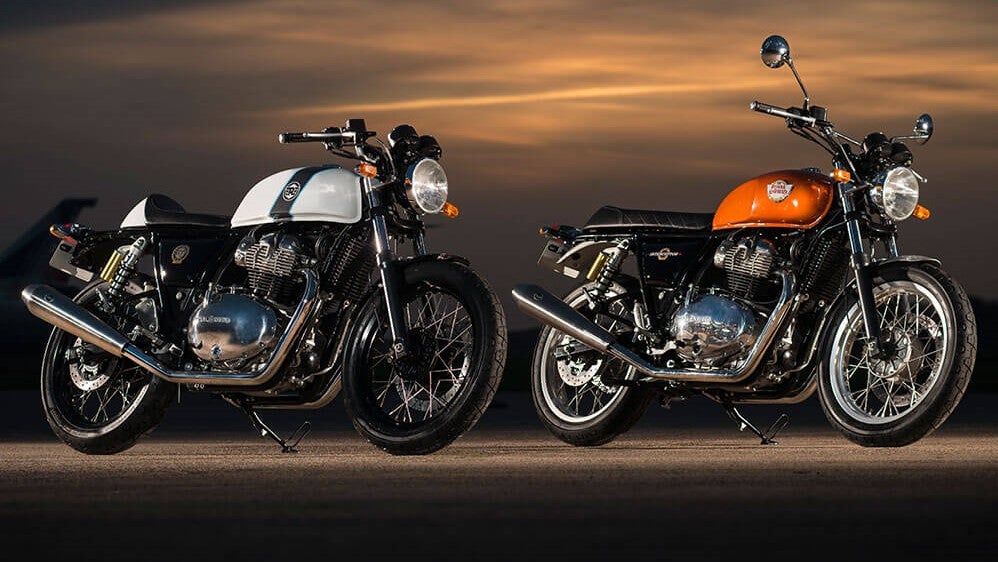 The two all-new Royal Enfield twin-cylinder motorcycles that debuted at EICMA in Milan earlier this month are making an appearance at the Progressive International Motorcycle Show (IMS) in New York. The new motorcycles are the Interceptor 650 and the Continental GT 650 which share the same frame and brand new parallel-twin engine with a new six-speed manual transmission with a slipper clutch, a Royal Enfield first. This new engine is a big deal because it’s the first twin-cylinder engine Royal Enfield has produced since 1970.

To recap, the Interceptor 650 is classified as a standard bike with a very traditional look and an upright riding position. It’s promising to be a good, stylish, all-around motorcycle that’s suitable for just about any street duty from city riding to highway cruising.

The other new “Twin,” the Continental GT 650 is more of a sporty cafe racer. Despite having the same frame and engine as the Interceptor, the Continental GT is decidedly more sporty thanks to its revised riding position with mid-level handlebars, a different fuel tank, and a solo seat with a painted cowl.

We spoke with the Rod Copes, president of Royal Enfield North America about the brand’s vision for these exciting new bikes. “The new models are a great opportunity for us to really help get the brand out there,” said Copes. “Riders in the United States enjoy larger displacement motorcycles. They want to be able to go on the highway for long trips and these new motorcycles.”

Testing the Aerostitch R-3 Light One Piece Suit
The Drive

Copes is referring to the fact that every motorcycle in Royal Enfield’s current lineup in the U.S. is single-cylinder with the largest one having a displacement of 535cc. Bigger bikes with parallel-twin engines will be more versatile and more usable for more American riders.

“These two new motorcycles will really be catered to the U.S. They’ll have adequate horsepower, torque, and performance. They’re very nimble and well-handling,” Copes said of the performance of the new bikes. He said the new twin-cylinder engine “looks very classic on the outside, but it’s a modern engine on the inside with four valves per cylinder as well as overhead cams.”

We also got the scoop on pricing and availability, albeit vague information. Copes told us both bikes will start at under $7,000 with the Continental GT costing a few hundred dollars more than the Interceptor. “There’s really isn’t anything like that product with this value right now in the U.S.,” said Copes possibly referring to the fact that the similarly styled Triumph Street Twin, the cheapest bike in Triumph’s modern classic lineup, starts at over $9,000. The Royal Enfield Interceptor 650 and Continental GT 650 are expected to arrive in dealers in the second half of 2018 after the Himalayan debuts in Spring.

“We’re really excited because this is really a breakout product in the United States,” said Copes. “We’re very confident that when people ride them, they’re going to want to buy them."