NBA Star Stephen Curry Crushes It on Asphalt, Too 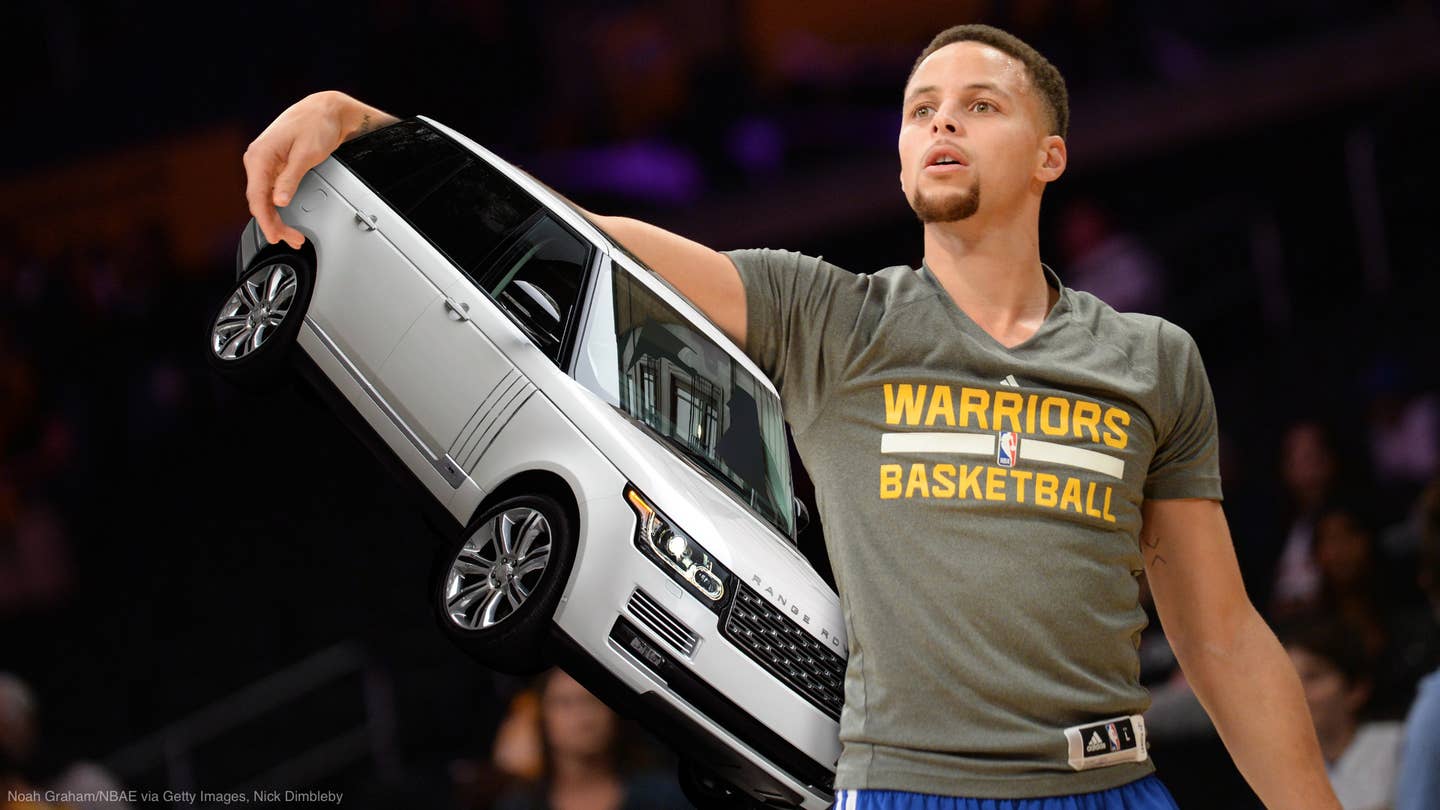 Stephen Curry’s list of career accolades during his relatively short tenure as a pro baller is nearly as long as he is tall. He’s cemented a deserved place in annals of NBA history because of stellar feats on the court, but he’s also a champion every time it comes to anything vehicular. From a solid trinity of wheels parked in his garage to his goofiness while driving to his automotive philanthropy, Curry hits nothing but net whenever a car is involved. Here’s the proof.

The Geländewagen is a fine choice for a pro baller, whether or not he actually plays ball. The iconic box on wheels features an Affalterbach-built 5.4-liter V8 with two turbochargers, capable of churning out 500 horsepower. The German beauty was birthed as an off-road monster, though after AMG gets finished tuning it, it’s more suited for straight lines on paved surfaces. (Dual sideport exhausts aren’t helpful for increasing approach and descent angles, but they do look purdy at a stoplight.) Curry sent it to finishing school via California Wheels in San Jose, where they tinted the windows, added custom chrome cages for the blinkers, smoked the lights and fitted it with 24-inch shoes with a custom Mercedes center cap. Lastly, “SC30” was stitched into the headrests.

The alphabet soup at the end of this Rover’s name stands for “long wheel base,” and the ute is indeed a long one, coming in at 123-inches from nose to butt. What do you get by taking the normal Rover chassis and adding eight inches? A backseat that reclines, perfect for a tall athlete looking to relax on rides to and from games. The LWB isn’t meant to be only a chauffeured livery. With a supercharged V8 cranking out 510 ponies and 461 lb-ft of torque, it’s very much a driver’s car. That power plant means the glistening tank can scream its way from a standstill to 60 mph in 5.5 seconds. There are a host of bells and whistles for the modern millionaire inside the cabin, including a fridge (which his wife uses to keep hot dogs cold), massaging seats and a $2,000 sound system. Curry again sent this stretched Range to California Wheels to give it 22s and custom painted trim.

While Curry’s got a 550-horsepower V8 lurking under that bonnet, and a glorious PDK seven-speed tranny to seamlessly mete that power out, apparently he’s not much one for goosing it. When taking a journalist along for a ride to a game a few years back, he didn’t crack 30 mph. A shame, as the GTS hates to go slow.

His Car-aoke Skills Are Unrivaled

As the tabloids frequently remind us, celebrities are just like us: they blink, buy toilet paper, pump gas and sing unabashedly in the car. Thankfully, Curry’s wife, Ayesha, had her phone handy for a particularly inspired rendition of Phil Collins’ 1981 hit “In the Air Tonight,” as imagined by Curry. Hopefully he was steering with his knees during the air drum solo, as the car is still very much in motion.

Curry more recently proved he’s an Ed Sheeran fan with an enthusiastic and rather hypnotic take on the British crooner’s track “Late in the Evening.” Someone please invite Curry to Spike’s Lip Sync Battle.

His Response to Being Tailed. For 30 Miles. For an Autograph

There are plenty of crappy and weird ways to ask someone for his or her John Hancock, but this is surely among the worst. It’s unclear what would possess someone to think that tailing a man and his family for a half-hour drive would be appropriate, but the fact that the aggressor rode Curry’s bumper is unforgivable. Nonetheless, Curry seemed to write the whole situation off with aplomb via the well-articulated tweet above.

His Donation of the Kia He Won for Being MVP

After accepting a 2016 Kia Sorento as the prize for being crowned Most Valuable Player for his 2014-15 season, Curry promptly turned it over to the East Oakland Youth Development center. The organization said it would use it for field trips to focus on education, art, wellness and careers. Granted, with the garage Curry’s keeping, the benefit seemed to cut both ways.